Why Do We Attack That Which We Don’t Understand?

Have you ever noticed the hand wringers that come out of the woodwork to question a form of exercise when, done improperly, it causes injuries?  Case in point; this morning on the way into the office I was listening to my favorite morning show, the Paul W. Smith show on WJR, when he commented on reports that “barefoot” running is causing all manner of injuries including stress fractures and pulled calf muscles.

Now having listened to the show for more than fifteen years, actually speaking with Paul on-air several times about various topics, I know for a fact that Mr. Smith is anything but a hand wringer so his all too short report surprised me a bit – he left out a lot of pertinent information.  I did call in and spoke with the producer and offered to explain the realities if there happens to be time in the show.  The comment was only three or four sentences, but let’s deconstruct what I had to work with.

First of all, I have to believe that Paul was referring to the new minimalist approach that is sweeping the world of running so I’ll just go on that assumption.  Several of my closest running friends are enjoying, very much and very carefully, this style of running and I’ve written about it many times before, but let’s get into it one more time for fun.

There is no doubt that if done incorrectly, switching from normal padding shod running to minimalist running will cause injury.  Specifically, as it pertains to the misidentified “calf” muscle.  The one thing everyone should know about minimalist running is that it absolutely requires a switch from the heel strike or mid-foot strike to the fore-foot strike, where one strikes the ground first with the ball and toes allowing the foot to absorb the impact rather than the padding of the shoe in the mid or heel strike.  This isolates the plantaris muscle – a tiny muscle that runs up the middle of the two large calf muscles – and that muscle doesn’t like to be isolated.  The plantaris is located directly behind the “calf” muscle: 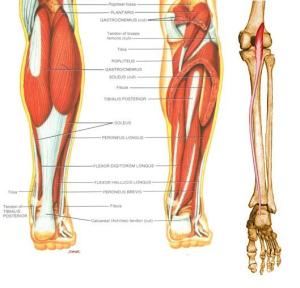 When the plantaris muscle is isolated, it carries a lot of stress from the impact generated by running and also by the surrounding muscles so if that tiny little muscle isn’t given time to build up against those stresses, a pull will occur.  When the plantaris is pulled it feels like a calf pull – the pain starts at the center of the calf, just below the back of the knee and follows the connecting tendon all the way to the Achille’s (at least that’s exacly what happened when I dealt with this injury).

This, no doubt, is the injury that Paul was referring to on his program this morning.  It is not a reason to refrain from minimalist running though.  If one takes the time to properly train the muscles, minimalist running can be just as injury free as regular fore-foot running, if not more so.  The trick is that the muscles must be given time to build up to the new impact.  When converting, runners should enter into the endeavor slowly.

As is with life, and so often politics, half of the information is never enough to run on.

As for the stress fractures, I could take the time to research them, but I’d be willing to bet Paul lunch that proper training gives the bones time to build to the impact in the same way it does the muscles – because we all should know that running builds bone health (see #3).

Finally, as I linked to earlier, the recovery regimen suggested by my doctor for fighting my plantaris pull was no rest and lots of cycling:  slow speed (17-18 mpg) and high cadence, dropping my heel at the bottom of each pedal stroke to stretch the affected muscle – I was back to running in two days, pain free in four.