The Vacation – A Wrap Up

On just getting back from my first ever fit vacation I figured I’d give a wrap up and overview of how everything went…  I started writing this on Wednesday morning to keep everything straight.

Unlike most vacations I’ve taken, in which fitness takes a back seat – or more correctly stated, rides on the roof rack or gets left at home altogether – I was active, in one way or another, every day.

We arrived in the mountains of Northern Georgia on Thursday morning.  I went for two rides that day.  The first ride was just to see what the ride down our mountain pass would be like and, more importantly, to see if I could climb back up.  I don’t know how they figure grade percentage, so I’ll go by degrees…  There was no rest on that 1-1/2 mile climb and it was all better than 25 degrees with the vast majority of it north of 33.  There were three tough sections at or over 40 degrees and one of them stretched for more than ¼ mile – it was so tough that I literally wasn’t strong enough, even with my granny gear, to keep my legs turning to keep moving forward.  I ended up walking both times.  The second ride was down an awesome stretch of road that wound about the shoreline of Lake Burton – and there was plenty of good climbing there, but at a more reasonable grade for a flatlander…and for Mrs. BDJ.  I didn’t have to get into my granny gear (which the misses doesn’t have on her bike) and it was a perfect stretch of 12 miles out and back with plenty of switchbacks and technical riding that we could do together.

After that first day, I loaded the bikes on the back of the van and drove down to a small parking area at the beginning of the road.  I considered riding down with Mrs. BDJ, but she’s only been riding a road bike for about a month, so I presented her with the suggestion that we skip the descent from the house.  The road was only 9’ wide (only enough for one car at a time) at the upper section by the house and 12’ wide on the bottom mile.  At 30 to 45 degree drops, it was way too easy to lose concentration, especially for someone (like my wife) who likes to take in the surroundings while they’re riding.  To give you an idea of the elevation difference between our normal ride and the descent from the top of the mountains, I can offer this from Endomondo:

Here’s a profile of Murray Cove, recorded on a ride with my wife (the gray is elevation on the graph below:

Here’s the profile of Murray Cove road plus the mountain road to the house we stayed in:

The descent is on the left, the attempt at the ascent is on the right – which is a little distorted because the graph is given in time, not distance – it takes longer to climb so the elevation gets spread out.

We rode that normal route together Friday and Saturday and then Sunday morning before packing and heading to North Carolina and Lake Nantahala.  The riding in North Carolina was a lot easier, as far as turns went, but much harder in terms of climbing.  Of course, because the climbing was tougher, the descents were awesome!  The roads are pretty narrow around where we stayed – no shoulders, but the speed limit was a reasonable 35 and there were a few “Share the Road” signs and there were a few café’s that offered free water refills to cyclists – so it was quite obvious on the drive in that cycling is quite big in the area.On Monday, our first full day there, I went out for my first reconnoiter ride down to the Rustic Café where they had wi-fi so I could pick up my email.  From there I headed down Junaluska road that leads into Andrews, NC, a quaint little mountain town.  Being my first ride in the area, I took it pretty easy because the last thing I wanted to do was take a corner too hot and crash, winding up in the hospital – oh how funny foreshadowing is…

The first hill leading to Andrews was a big one – I hit 36 miles per hour, sitting up to break the wind.  Also, I only went 15 miles because it was later in the afternoon and I wanted to get back so we could eat at a reasonable time.  The climb back up was awesome to say the least, and I finally started to understand why Aaron likes climbing so much.  It was sprinkling out just a bit, and I was quite thankful for that, as it was some seriously hot work getting up that mile long hill, and my little flatlander legs were really having a tough go of it.  All in all, it was 1,355 feet of serious climbing – and oh how thankful I was for my much bemoaned triple crankset.  With that first ride out of the way I was comfortable with going all out…

Monday night, after a full night and most of the wee morning hours of cards (Spades) with my brother and sister-in-law, I got ready to retire while my wife and her sister went out to the second floor porch to check out the stars.  They turned off all of the lights in the house for a better view and then called to me to check it out.  With all of the lights out, I completely forgot that we had a stairwell just outside of our bedroom door – it was a long, quick trip down.  I landed on my kidney first, then my left shoulder, then I slid down three stairs on my back before my legs caught up and went over top – I landed on my head last (I think), so hard that everything went white and then I was laid out face down on the carpet.  I can remember, on the way down, several distinct thoughts rushing through my head:  “Wow, this is going to hurt” was the first.  Second was, “go loose” followed by, “roll with it, roll with it”.  Finally was, “holy shit, I’m alive – and I can wiggle my fingers and toes…  YES!!!”

The next bit was a bit emotional for me and it’s going to stay in the basement of that house between my family and I, just suffice it to say that I’ve got a stellar, wife, mother-in-law and brother and sister-in-law.

I hurt a little bit, but was surprisingly not in as much pain as I figured I should be…though I was not looking forward to the dreaded day after.  I had my mother-in-law check me for concussion (then I did it myself) before crashing (forgive the pun).  My wife still made sure to wake me up every time I moved or twitched to make sure I was ok – she is a good woman, even if it did get a little old after the sixth, “are you ok?!”  I woke up on Tuesday with distinct red lines on my skin where I’d hit the stairs but was happily surprised that I really wasn’t in too much pain, with the exception of my lower back at my kidney…  That had started to swell pretty good and developed a nice bruise to it.  I performed the only test I know to make sure everything was functioning properly and went about my day – we hiked to a waterfall and the scenic lookout in Nantahala (a couple of few miles after it was all said and done) and I took the day off the bike.

On Wednesday, Mrs. BDJ decided she’d like to ride too (sweet), though this presented us with a problem.  The hills around Lake Nantahala are not as plentiful as they were in Georgia, but they are a lot bigger and steeper.  Unlike my triple, Mrs. BDJ’s Cannondale has a racing double (52/42) and a 13/23 7-speed cassette…  Great for flatland riding – not so much for mountain climbing…  We literally had a stretch of only about 2 miles that she could reasonably ride from the bottom of our mountain (gravel) road to the Rustic Café.  We did an out and back twice for eight mile before I went back out on my own.  I put in another 17 miles for a total of 25 and 2,600 feet of climbing – this time I didn’t stop until I got to the top of the mountain leading into Andrews.  It wasn’t incredibly difficult, but it was long – 3-1/2 miles at an average of about 9 mph.  I turned around at the Macon/Cherokee County line and headed back down – a perfect stretch of downhill…  Long and straight, so there’s no worrying about overshooting a turn or coming around a corner at speed to find something in the middle of the road.  I topped 40 mph on the way down, for the second time that day, and wore a semi-permanent grin for the next three or four miles, until the final climb up to the Rustic Café that had proved quite difficult for me on Monday.  I was a little nervous about it after a decent ride – it’s a lot steeper, though shorter, than the climb towards Andrews.  It was a push for sure, but I made it just fine so I stopped by the Café for a couple of small bottles of Coke (good God, did they taste good!) before heading home triumphant.  That was the most fun I’d had on my bike on this trip – possibly since I started riding.  I did the same thing on Thursday, and on Friday morning, I just did the out and back as we were renting a pontoon boat for the day and I had to get back.

It only hurts when I laugh…or cough, or sneeze…

Though I was busted up a bit, I didn’t let it bother me – technically I didn’t care, I wasn’t about to let a sore side wreck some of the most enjoyable riding I’ve ever experienced.  I had more fun than a fella should be allowed to have with his clothes on.  The people of North Carolina were absolutely amazing toward cyclists – most waiting behind for an opportune time to pass.  I’ve never seen anything like it, and the Rustic Market staff at Wayah and Junaluska Roads were incredibly nice.  I was under the impression that I had it pretty good in Michigan, but North Carolina is absolutely where it’s at as far as cycling friendly people go – they were remarkable. I didn’t really get in any long rides on vacation (24 and some change was the longest), but that’s not why I went in the first place – I was on a family vacation and managed to get a ride in on most days in the process vacationing with them…  I also learned that I’ve got a long way to go to getting into mountain climbing shape – unfortunately there’s nothing within 250 miles that compares. We’ve already made plans to vacation at the house in northern Georgia again – Lake Burton was absolutely as good as it gets for mountain vacations, the riding isn’t quite as good (nor are the people as friendly), but when we vacation together I’m on vacation first, riding second…  The coolest stretch of road I saw, and perhaps a target for a future cycling specific vacation was the Dragon’s Tail – Route 129 in Tennessee.  Now that looked like fun (We headed back to 75 that way). 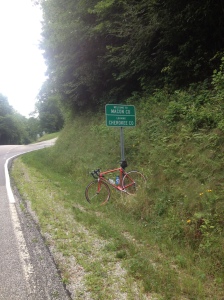