Can A Mountain Bike Go As Fast As A Road Bike?

Continuing with my passion for answering questions posed by Google searches, we have: Can a mountain bike go faster than a road bike”?

The short answer is, never in a million years, but let’s look at how one could…

If you took me, a slightly above average cyclist, and put me on my mountain bike – against an 80 year-old out of shape fella on a road bike, then yeah… I’d kick that old fella’s ass.

BUT, same scenario. Me on my mt. bike against, say Matt Assenmacher, an accomplished cyclist who’s 20 years my senior on his Madone and he’ll smoke my ass… It wouldn’t even be close.

Ah yes, when the idiocy of politics meets reality, life can get a little messy…

Scott Weiland – Purple at the Core, and he hasn’t missed a step…

Scott Weiland of Stone Temple Pilots came to The Machine Shop in Flint, Michigan last night.  The Stone Temple Pilots, the band Weiland founded 25 years ago, is absolutely – hands down, my favorite band EVAH!!! and I got to see the best part of them (he was with his solo band, the Wildabouts) perform in a bar that holds somewhere between three and five hundred people.

I’ve never been so happy to walk out of a place with a serious case of tinnitus.  I saw the Pilots for the Purple tour almost twenty years ago from the nose bleeds at the Palace of Auburn Hills (my God, has it been that long) – and he was at a bar, in my home town, kicking of a quick “way back” tour that had him performing all of his best songs, with my awesome yet amazingly sexy wife on the eve of her birthday…  And telling you how close we were won’t do – I have to show you.

Now, being a recovered drunk of twenty years, you may have come here for a report on whether or not Weiland has escaped his checkered past and I won’t give an opinion on this, except to say he drank water and Gatorade (Fruit Punch) on stage and was the most gracious performer I’ve ever seen at the Machine Shop – he was an absolute gentleman, with the exception that he rocked ass!.

Now that photo there, that’s pretty good for seeing one of the most prominent acts of the entire 1990’s, no?  Just is pretty good… 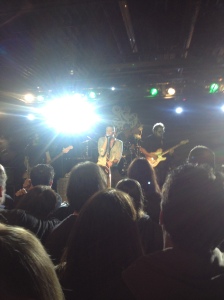 But this is freaking AWESOME!

To say that Weiland and the Wildabouts rocked the sold out crowd would be an understatement of epic proportions – while they had technical stage issues to work out (that’s what the first show is for), the band was tight, the music excellent, and the recording device policy lax (thanks Scott).

I’ve put together a short edit of a couple of songs so you can get a taste, but if you want any more, you’re going to have to see the show – and I can assure you, if you’re a Scott Weiland fan, the experience is worth twice the price of admission – the schedule is at the link to Weiland’s website above.