The Greatest Fallacy I’ve Heard In Quite A While…

My aunt died a sad, fat woman. Alone in a hospital bed – we didn’t even know she was there until they called to tell my mom that we all needed to come in… One of the causes on the death certificate was “morbid obesity”.  She wasn’t always fat, she had gotten control of her weight in her 30’s and was in decent shape when I walked her down the aisle for her wedding.  Her father, my grandfather, had died when I was only five so being the oldest nephew I was tapped for the honor.  I’d never seen her so happy.

With the ring on her finger, eventually she set about letting herself go.  Once she did she quickly gained all of her weight back and then some.  Her husband wound up cheating on her with their secretary – a nineteen year-old girl, less than half his age, and got her pregnant, but not before he brought her home a little present that required intensive medication… He claimed he’d picked “it” up from a toilet seat.  They were divorced shortly thereafter.  My aunt became a hermit, living the rest of her days in squalor – with three homes, a once thriving business that she and her ex-husband had run into the ground and enough debt to choke a normal person.  Being the oldest nephew and having the greatest business knowledge in the family, I was asked to wrap up her estate by my mother.  It took more than two years.  Cleaning her condo of refuse, the likes of which was worse than shown in most “hoarder” TV shows, took six of us a week – we ended up with more than 40 garbage bags full of trash that had to be put to the curb over two weeks.  It was utterly disgusting.  Her home up north, her mother’s home left to her in the will, was destroyed – she’d turned the power and heat off the winter before to save money but didn’t winterize the home.  The basement flooded and the water made everything in the house grow mold.  The house could have drawn $250,000 had it been taken care of, instead we had to settle for $40,000.  Her lake home was in better shape but was still sold for about half of what it was worth. 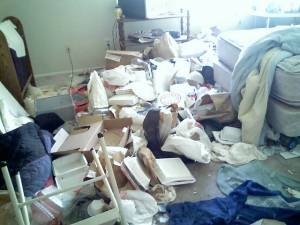 It’s a sad story for sure.  The fallacy, heard uttered on TV by a Biggest Loser in a commercial for the show was, “I always felt that people judged me by my weight rather than for who I was”.  Personally, I’ve always wondered how my weight could not be a part of who I am, but there’s a more important point than just poking about the edges…

While still thin, my aunt once told me that she was treated much better when she was bigger.  She used to tell us about how much different life was being thin – because people began to advantage of her.  Without the weight, they didn’t feel sorry for her anymore.

My aunt died, alone in a hospital bed, because the hospital didn’t have a CT scanner big enough to fit her in it.  She weighed, if I remember correctly, in the neighborhood of 425 pounds at the time if her death. She was 5’5″ and hadn’t even made it to 50 years old. Whether she meant to or not, her early demise was her choice, as was the sad mess her life had become.  I’m sure she wasn’t thinking, “hey, life is pretty good, let’s see how much I can mess this up – pass the donuts”, but that’s pretty much what ended up happening.

I never judged my aunt for her weight.  I felt sorry for the choices she made, as did most people who knew her.  For the most part though, people don’t care one way or another about people outside of their circle of friends and family.

I would be willing to bet my lunch that the person who feels other people judge them for their weight are projecting how they feel on others.  At least that’s a little more believable, because I really don’t think most normal folks care one way or the other – certainly not enough to judge somebody else.  My aunt surely died of a broken heart, but she had more to do with breaking it than anything – or anyone – else.

Let me just say right off the bat, I love it when I walk into the bike shop and hear, “Well, we beat the estimate on your bike by about thirty bucks”. That’s music to my ears folks, and pretty much par for the course at Assenmacher’s. Second on my list of awesome things to hear at the bike shop is, (as I’m looking over the clothing racks) “are you thinking of buying some clothing? It’s all on sale”. “Oh indeed Mike, I am indeed”, I replied as little drops of drool started gathering at the corners of my mouth.

I walked out of there on Friday with my fixed mountain bike – on it, a new chain, triple crank and bottom bracket, installed, and a $150 pair of Specialized RBX Pro shorts for $210, out the door. Let’s just say I’m a very happy man. So that should do it – I’ve got a new pair of super high-end shorts for my Tuesday nights and centuries this year, a fully functional mountain bike that shouldn’t give me fits any more – I’m ready to go. Now if it would just warm up around here a little bit! Sheesh. 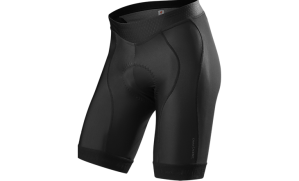 Yesterday I went out for what was going to be a seven mile run but was still feeling a little bit of hamstring pain so I decided to knock that down to a quick 5k – and quick it was… If I’m only running a 5k, I don’t like to stick around to watch the paint dry – I was only 20 seconds off of my personal best time, overall a 7:46 pace. I concentrated on keeping my stride compact to keep from re-injuring my left hamstring too much, while keeping my cadence quick to keep my speed up… I found that I’ve gotten quite a bit faster this winter. I had to work hard for the 7:46, but I could have gone much faster with non-icy shoulders and warmer temps (it was below freezing and snowing a bit). In fact, the first and last tenths were on icy, snow-covered road – it was treacherous. I have no doubt I’m going to have a new PB 5 k this summer.

It was a great day for a run, and Mrs. Bgddy joined us at the running club, doing her own 5k with my buddy Dennis.  A bowl of venison chili and it was back home for a much-needed nap.