I went for my first outdoor ride of the year today on my mountain goat.  It was a perfect late winter ride, temps were only a few degrees over freezing when I left but the sun was shining gloriously.  I’d been nervous about when to go because I didn’t want to be interrupted by a bunch of work.  I chose to go at lunch time rather than wait until later in the afternoon…

It was a chilly start but by the time I was a mile in I didn’t care – I was pedals to the metal and lovin’ it.  I’d also been a touch nervous about how well my training went over the year, specifically if I’d managed to keep the legs.  I put in twice the time on the trainer over the previous year so I had high hopes that I wouldn’t lose too much.

Because I’ve got a 27 mile brick planned for tomorrow (24 on the mountain bike and a 5k) I didn’t want to go too hard but once I heard my Endomondo chick tick off the first mile in 3:30 I couldn’t help myself.  The second mile blew by in 3:18 on my mountain bike with full-sized dirt knobbies.  The next couple of miles were a little slower because I got stopped at a few stop lights but I ended up cranking out a 3:16, 3:10 and a couple of more 3:30’s before I wrapped up my 14 mile ride.  I ended up with, stops included, a very respectable 16.7 mph average…  And a new personal best for a 20k distance.  Not only did I not miss a beat, I think I actually got faster.  I was between 15 and 16 for an average last year.  I’ll be a monkey’s uncle – there’s something to interval training!

I came in the last mile a little slower than average because I had that ear to ear grin going – my God was it nice to be outside and to have my love affair with cycling rekindle in all of six minutes.  Ah, the glorious endorphins!  It’s going to be a good year.

The Case For Clip-less Pedals: Things Noobs Need To Know…

For many budding recreational bicyclists, especially those of us who learned about bikes as a kid – which simply means you rode them till the wheels fell off, then let mom and dad pick up a new one, pedals were the least of our worries – those black plastic one’s with the reflectors worked just fine.

As adults, we graduate.  As long as we’re not out for a ride on the leisure bike we’re cyclists and the days of plastic pedals should be left in our distant past – along with the insanity of not maintaining your bike – if you buy a decent one, you won’t be wanting to replace it in a few years.  Some will stick with the toe clip pedals that come with many bikes thinking these are an upgrade from standard pedals.  They are an upgrade, but they’re still pretty useless when compared with today’s press-lock, twist release shoe and pedal options.  Having switched early in my new adult cycling addiction, both styles of bikes (mountain and road), I can say that decent pedals and shoes are worth every penny spent to upgrade to them – and in many cases we’re talking about a lot of money. 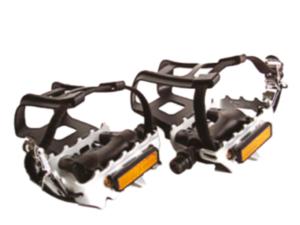 The “Clip” part of this pedal refers to the cage that holds the foot to the pedal.

For the mountain bike, SPD pedals and mountain biking shoes are excellent, though you do get what you pay for.  I’m on my second set of low-end Shimano pedals for my mountain bike and I’ll probably end up having to replace those at some point this year – I’m just too strong and I ride too hard for the cheaper pedals (PD-M520L).  For the next pair I’ll have to jump a few grades to get any length of use out of them.  Now, on a rough single track I find the SPD’s (hereafter referred to as lock-in pedals) absolutely indispensable – especially when climbing up a hill with roots and rocks in the path.  The usefulness inherent in the ability to pull with the opposite foot while pushing with the forward foot cannot be emphasized enough.  On the downhill sections is where the lock-in pedals really prove their worth – your foot can’t bounce off the pedal.  The only thing that I really miss about lock-in’s is the ability to take my inside foot off of the pedal and put it out for stability.  While this habit has died hard, it’s only needed because I lacked A) riding skill, B) confidence in my bike and C) the ability to pick a good line.  Once those three things came around with practice, I stopped wanting to put my foot down and things got better.  You can expect to pay between $100 and $300 for a decent set of pedals and shoes. 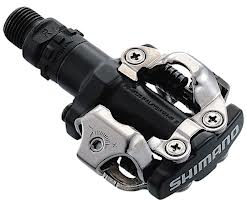 Next is the road bike.  I have Pearl Izumi Tri Fly III Carbon shoes with Look Keo Classic pedals.  I won the shoes from College Tri and bought the pedals at my local bike shop.  All told the setup would run anywhere from $250-$400 depending on where you buy, and you still have to pay to have the cleats installed on the shoes (a process that could probably be done at home but is much easier with the proper tools and a pro’s knowledge).  Now I always buy everything from the bike shop even though things are typically more expensive.  I could save $50 here and there, maybe even more but I rely on my bike shop being open so I don’t mind spending a little more.  Now, cost aside, road biking is quite a bit different from mountain biking at the purely “fitness” level, though it’s very easy to get sucked into the carbon this and titanium that, “I gotta have the lightest thing on the market” mentality.  Do my P.I. shoes with the carbon fiber soles help me go faster?  Sure, I’d say they’re stiff as a board, but they’re actually a lot stiffer than that, so they transfer all of the force from my legs to the pedals, but for most of us recreational cyclists you don’t have to get the most expensive product to get a decent benefit.  That said, the road setup is much more “locked in” than my mountain bike setup and I absolutely love it.  Again, the benefit of being able to push and pull at the same time simply can’t be quantified when you’re looking at the difference between standard pedals or even pedals with toe clips – which, unless you spend some decent cash on a decent pair, have a tendency to fail over time.  I was out with a buddy on a 49 mile ride (it was his 49th birthday) and his toe clip lost a bolt with about 8 miles to go – he had to ride that last bit with the clip hitting the ground every time the pedal went around and it drove him nuts.  As far as I’m concerned having a setup that won’t allow that to happen in the middle of a ride is worth every penny.  I like adversity, but not that much.  Here’s my shoe, pedal and cleat setup: 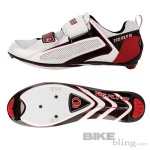 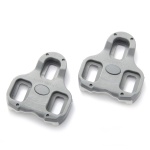 Now if you do decide to upgrade to lock-in/twist release pedals there is a learning curve.  Ask anyone who has switched and you have an 80% chance of hearing an “I fell down” story.  You’ll hear about hurt pride and scraped up knees and you might even bump into someone who will warn you against making the upgrade.  The tough part of making the change is getting used to the fact that you have to twist your heel to unlock the cleats – an action that wasn’t required when you learned how to ride as a kid.  I can tell you, I’ve never fallen because I failed to unclip at a stop (sudden or simply forgetting) though I have a few friends who have.  So, how to go about switching?  If you’re starting out on a mountain or cyclo-cross bike, I would recommend against starting out on a single track mountain trail.  A road bike?  You won’t want to start on a steep incline in the mountains.  In fact, I recommend starting in the front or back yard – on grass.  Grass hurts a lot less when you fall on it and it probably won’t chip the paint or harm the components on your bike.  Practicing on a road bike can be a little trickier with the thin tires in the spring – the ground beneath the tires simply isn’t firm enough to support you.  If you’re clumsy, wait until late spring or early summer for the ground to firm up a bit to switch – or take your chances on the pavement, maybe in an empty parking lot – somewhere lacking traffic is the important factor here.  Once you’ve had your practice session or two you should be fine, just keep the fact that you have to unlock your foot when you stop at the forefront of your mind until the movement becomes natural.

To summarize, embracing the clip-less pedals for cycling, whether on the road or off, is well worth the money and effort to get used to them.  There’s a reason, if you show up to a group ride, that everyone else is using them – they’re that good.  If you want to go old school, which can definitely be pulled off, you’ll still have to upgrade to decent cycling shoes and pedals.  Showing up for the group ride with plastic pedals and rubber toe-clips is not old school, it’s gauche.  Is that fair?  Probably not, but nothing in life is.  Put simply, if your pedals cost eight bucks new… 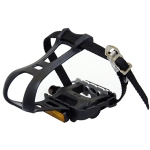