Making A Mole Hill Out Of A Hill: The Noobs Guide To Climbing Hills (Not Mountains, Hills)

Anyone who deals with hills on a regular basis – and doesn’t like them – knows that a decent one can suck the life out of a great ride, and quickly.  There are a few schools of thought on the “best” way to climb.  I have no opinion on either because each rider will have to pick their poison.

Some shift down a gear or two easier than they’re in when they approach the hill, get out of the saddle and grind up the hill.  Others like to shift into a much easier gear and spin their way up.  I used to be partial to the former until I visited the mountains and found out what climbing hills is all about.

There are also two philosophies for the non-racer concerning hills (and various hybrids of them):  Go easy and drop the pace up the hill then spin up on the way down using gravity as your friend.  There’s a lot to be said for this but I prefer the second in most cases, attack the hills and use gravity and the downhill to recover before pouring it on near the bottom.  I picked this philosophy up from running with a good friend who always emphasized keeping the same pace up the hills, then recovering the breathing on the way down.  The funny thing with gravity is that as a runner I can even pick up the pace without the effort, thereby still recovering.  Hills, looked at this way, become a time to pick up the pace so mentally they don’t have the same dread behind them.  Sure, it’s a mind game, but running and cycling are mostly mental anyway.

In the mountains, a hill that takes 25-30 minutes to climb is a lot different from a little roller on the outskirts of town.  For a real hill, it’s more about not blowing up, it’s about cadence and keeping the breathing under control.  Spin too fast or climb out of the saddle in too easy a gear and you’ll burn up in a matter of minutes (maybe even seconds).  Too hard a gear out of the saddle and you won’t be able to turn your crank over…  On the other hand, for that decent roller, say 100′ rise in a 1/4 to 1/3 of a mile or so (we have a few of those on the Tuesday route), I always shift up one gear (to a harder gear) and then climb it out of the saddle.  It may seem counter intuitive but it allows me to keep my speed up going uphill and I can manage the turnover of the crank at a decent pace so I don’t overcook myself.  I can always downshift if my heart rate elevates (a couple of days in the mountains will make you acutely aware of your limits).  I’ve been attacking hills all spring long like that so when we hit the first hill last Tuesday I pulled away from the group with a minimal amount of effort and I still had plenty left to spin up on the downhill that followed…  In fact, I had to stop pedaling down the hill so I could wait up for the other guys in our group.  Now, lest you think it’s rest time on the smaller rollers, I shift up two gears…

Now, I’ll be the first to admit that picking the granny gear and spinning up in the saddle has its benefits, it just takes forever and a day to get anywhere.  Where that comes in handy is in the mountains (as long as you’re not on a steep section, in which case you’re in the granny gear and out of the saddle already).  I don’t worry about the 90 rpm cadence on hills anymore either.  I probably drop down to 70 and mash the pedals a little bit till just before I get to the crest and then I give it a little sprint until I can feel gravity pulling me down.  If I feel myself burning out, it starts in the legs first then breathing starts to go, I’ll shift down a gear and keep the same cadence.

The payoff, at least for me, has been that I don’t despise hills so much any more because they don’t hurt me like they used to – and that’s all good!  We’ll have to see how this translates to riding in the mountains though…  I’ll be finding that out (and I’ll be sure to write about it) in a couple of months though I doubt I’ll be worrying about philosophy too much – I’ll be on vacation and that will be all about fun.

There Is Something Better Than A Great Bike Ride…

I kissed the wife and kids on the way out the door and I was off on my normal 16 mile early evening excursion around the block – just a recovery ride as the legs were feeling a little sluggish.  I made the quick 1/4 mile loop to the end of my road, turned around and proceeded to hammer the pedals (just to spin them up of course).  When what do I hear but, “Dad, mom’s taking us for a ride around the block!”.  I responded as I drew even with them, “Can I go with?”  So I turned around and headed back to the driveway where my ladies were all getting ready. 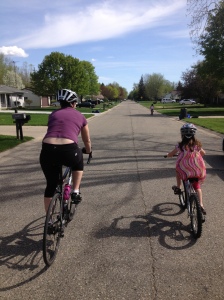 We did the first 1.75 miles at around an 8 mph pace (my youngest’s first excursion on her big-girl bike with a front shock, knobbies and the whole nine yards) before I broke off and proceeded to kill my recovery ride (the remaining 15 miles @ 18.5 mph), arriving in the driveway feeling absolutely awesome.  The remarkable thing about this abundantly sunny ride was that this was the first day this year with hardly a breeze.  In fact, I could have ridden the entire thing at 20 mph without much problem at all – except that it was a recovery ride day (I was a little bummed out to waste a no-wind day for a recovery ride to tell you the truth, but it is what it is).

Afterwards my awesome wife had dinner ready just as I got out of the shower…  It just doesn’t get any better than that…  At least not as far as I can imagine.  So the point is this; while I do love my solo rides, riding around the block with the wife and kids first is that much better.