Home » Cycling » The FSA Pro Compact Crank – the answer to the triple. Kind of.

The FSA Pro Compact Crank – the answer to the triple. Kind of.

My new ride presented an interesting opportunity for a fun little foray into “cycling geek mode”, so I decided to take advantage of it.  I have a new type of double on my Venge.  It’s billed as a “Pro Compact Double” and is somewhere between the compact and standard double.  There are several types of standard doubles:  52/42 is the racing double, 52 (or 53)/39 is another.  The compact double is typically 50/34 which is fantastic for climbing, especially with the 11-28 cassettes, but it leaves a little to be desired for top end speed.

My new Pro double, however, gets the best of both worlds at 52/36 – and it shifts excellently, no hang-ups or slow shifts which I thought would present a problem with such a large jump (from the 36 tooth chain ring to the 52).  The extra two teeth don’t really hurt the climbing gears either.

I went over to Sheldon Brown’s gear ratio calculator and entered in my chain rings and cassette sprockets and this is what it spit back out: 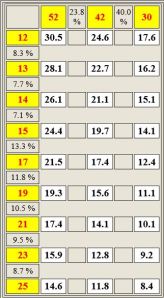 I’m gaining 2.8 mph of top-end speed and only losing six tenths on the low-end…  What’s really interesting though is all of the overlap in gears with the triple!  But, and this is where it gets important, with the triple I can’t access the low two gears in the big ring or the top two gears in the small ring because of severe cross chaining…  Not without wearing out the chain rings.  The end result is a lot of shifting any time I come up on a decent hill just to get into a decent climbing gear.  By contrast, I only lose the 28 tooth sprocket in the big ring and the 11 tooth sprocket in the small ring with the modified double…  In short, with the modified double, I can climb a steeper hill more comfortably without having to touch the front derailleur.  Now that works great in Michigan.  Where this will get tricky is my mountain climbing vacations.  It appears I’ll be getting a little stronger for next year.  Losing four tenths on the low-end may not sound like much – until you’re looking up at a 20% grade.

On the other hand, it is plausible that last gear was a little bit too easy for my main climb (and that would explain why my legs could take the effort but my lungs couldn’t) but I was to chicken to shift up a gear for fear I couldn’t get the crank around at the 25% sections.  It’ll be interesting to test this out next year.

Like Loading...
By bgddyjim in Cycling, Fitness, Humor on August 28, 2013.
← Light Headed and Dizzy After Long Workouts An Important Key to Continuous Sobriety →