Well, yesterday was my big foray to the Pere-Marquette Rail Trail. With birthday parties abound and hunting season right around the corner, it was the only weekend day in the foreseeable future that gave me enough time to squeeze it in. Unfortunately it was also a bowling night – and there was no way I was going to throw my team under the bus, trying to bowl after a 200 km bike ride so I cut it back by 50 miles to 75 – and thank God I did because the weather sucked.

Right away I knew that a jersey and the arm warmers weren’t going to be enough. With temps in the low 40’s, that’s just too cold for me – and riding 60-90 miles from my home, there’s no way I’m putting in for a suffer-fest with no local help to call if I run into trouble. I opted for my Specialized cold weather cycling jacket and full finger gloves. 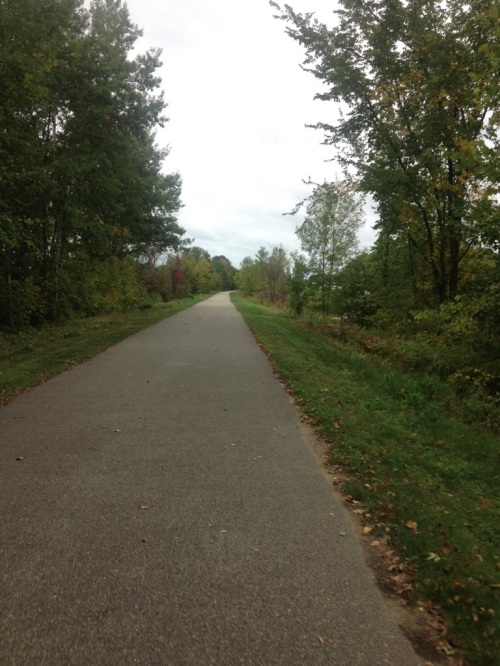 I paid no attention to time but I was pretty wiped out when I pulled into Clare. The original plan was to go for 80 by putting another 10 into the wind on the trail that picks up again just west of Clare. Unfortunately I was wiped out enough that I became a little discombooberated and got pretty lost. I tried to turn around and head back but I made a wrong turn somewhere and didn’t figure it out until I started heading out of town. I was just about to consult my Endomondo map when I figured it out and got back on track. Now, the final straw that had me head back to the trail was that I was going to spend 20 miles, just over an hour, in the middle of nowhere – nowhere to refill the water bottles, no nothing, and the temperature was dropping.

My Venge is hunting wabbits.

The next five were fairly uneventful… When I saw this:

Way off in the distance, the SUN…

I felt like I was chasing the sun all day but for the first time it looked like there was hope. With just 18 miles to go in the first 63, sweet Jesus, the clouds broke. I warmed up pretty quickly, enough that I had to unzip the bottom of my jacket to let some air in. It was beautiful.

Immediately after taking that photo I headed over to the car, shed the jacket, put on my arm warmers and headed back out for another twelve to make it an even 75 miles. 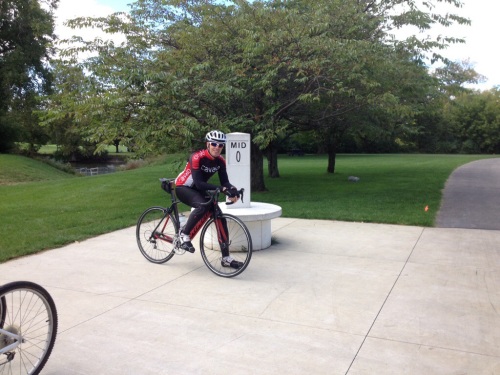 75.4 miles in the books. I got back in enough time to get in a quick nap before heading to the bowling alley… First game, average. Second, above average. Third, yeah I completely ran out of gas. It was ugly…127. Oh well, good enough for government work. It’s now 9:30pm and daddy’s out.

Like Loading...
By bgddyjim in Cycling, Fitness, Humor, Uncategorized on September 23, 2013.
← What Pains Me About Cycling: Saddle Fore and Aft Location, Stretched or Crunched The Hard And Fast Rules Of Life… →