Growth and Transformation; From Noob to Cyclist 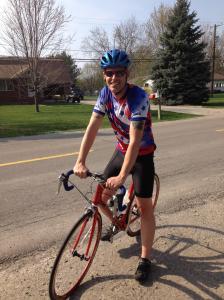 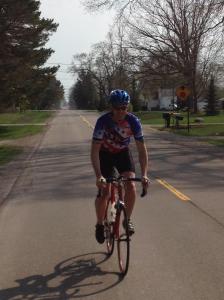 Incidentally, there’s a reason for my being so skinny.  This was the first time I’d really started putting in some big miles on the bike…
I dropped down to pro cyclist weight (2.0 pounds per vertical inch) and I hadn’t figured out how to eat to sustain a more reasonable weight yet.
The change came shortly after these photos were taken. 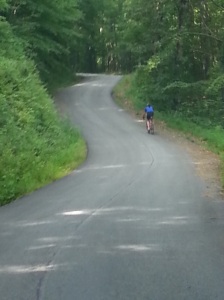 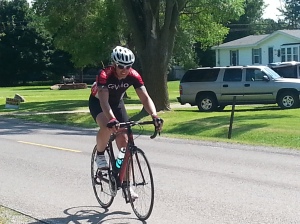 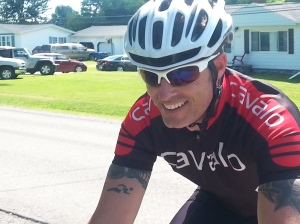 It’s amazing to me that I A) survived my initial geeky entry into cycling and B) never knew I was geeky.

Funny how that works, ain’t it?

The point of this post, fellow noobs, is don’t take yourself or “society” so seriously. We all look dorky at first. Even the cool kids. It’s a rite of passage.

The Number One Rule of Cycling: Show Up.

Last evening was looking ugly on the Weather Channel. One of those 100% chance of 30% rain nights. It was cold too, 20 degrees below normal – so cold I contemplated pulling the leg warmers out. I did opt for a long sleeve jersey and I needed it.

I took a day off Monday to play badminton with my family… My father-in-law is up from his home in paradise and my niece and nephew are staying at the house. Still, the wind was gonna suck and the group was going to be antsy.

I still showed up.

Man, if it rained that would throw a double dose of suck at us. Slick roads and rooster tails… Damn.

Nobody ever got faster riding the damn couch.

We made it the whole warmup (seven miles) and 1-1/4 miles of the club ride dry. It had been sprinkling once in a great while for four hours so I’d hoped if we did get wet it wouldn’t be enough to wet the asphalt. Nope, I took my pull up front and was treated to rooster tail for supper as soon as I fell to the back. We went on, around 22-23 mph – quite subdued even considering the rain, and I felt… Great. Go figure.

Fourteen miles in, all hell broke lose. One of the Clydesdales who’d managed to hang on to that point got squirrelly and almost took out a racer and his wife on their brand new $13,000 tandem. Within a minute he’d shot to the front and took the pace to 29 mph to shake the group up and drop the offender. I was stuck on like a tick, no worries, until my buddy Mike fell back and said he was dropping off. I checked my six and signaled I was hopping out too. A few more, Carla, Brad and Phil went too. We formed up quickly and kept hammering away.

The rain had stopped a while back but now we were fighting the cold. It was nasty. We soldiered on at pace and I made sure to take at least my fair share up front. Tough to get stronger chilling at the back.

Then we finally headed east with the wind at our back, the home stretch. Chuck attacked. I was two wheels back and could hear Mike yell “Go get him Jim”.

Two years ago on my first few club rides and I’m dropped every ride as soon as the speed passes 25 mph and I’m bringing up the rear with the first guys to drop off. I don’t know my butt from a hole in the ground but I know I like it…

Today, after a monster ride on Saturday I’m hanging in just fine at almost 30 mph and only fall off with the last group so I can hang with my friends… And when one of the others attacks, the guy I respect the most sends me after him because he knows I’ll run him down.

I ran him down, maybe a little too fast because I could hear Mike say, “not that fast”! Funny thing… I have mad power on the acceleration but I can’t sustain it for very long.

We had a great finish and ended up holding a 21.6 mph average. Considering the slow start, the fact that we were slow through 15-20 minutes if rain and that we slow down or stop for every traffic signal, that average is huge… A tenth faster than I’ve ever completed that track and in crappy conditions. Oh, and we did the full 33 mile route, we skipped the shortcut.

I just showed up.

I’m not suggesting perfection, nobody is. I’m not saying every day will be a confidence booster, indeed you’ve got a rare shot at best. But we learn from from every ride, good or bad, don’t we? Of course we do.

One thing is certain though: If I’d have polished the leather couch with my butt instead if toughing it out, I’d have missed out. That’s why the number one rule in cycling is “Just show up”.