Home » Uncategorized » The Last Small Smart Phone. And an Upgrade for the Venge…

The Last Small Smart Phone. And an Upgrade for the Venge…

I gave my last iPhone to my daughter. A pristine 4s that had never seen the light of day without a Life-Proof case protecting it. I’ve taken videos of my kids swimming, underwater, with that phone and case, ridden through downpours with it in my back pocket. Dropped it countless times, and even skidded it across a parking lot a time or two… Take it out of the case and it looks as good as it did the day I bought it. Seriously.

Alas, I was due for an upgrade At the beginning of September and that phone and I had been through a lot, so when I heard the 6 was coming out, I figured I’d bite the bullet and go big.

I got the last one at my local store. The very, last, one.

And It. Is. Huge. Heck, I thought the four was big, but the Six? Good Lord, I have some big-ass hands and it’s tough to hold even for me. Still, I did get the Gold edition so it’s got some really great features and more memory than my first laptop. Also, my old eyes are very happy with the change. I can see again!

Not only that, the camera is much improved. Not that I didn’t like the 4s camera, it was enough for what I do, but the new one is better for the after work and the finished project photos:

So here I am, with the newest, hottest tech gadget in the first three days of its release and I dig it plenty – I just can’t wait for the Life-Proof case to finally come out (Apple apparently won’t release an early copy to anyone so the aftermarket products can coincide with the release). For now, I’ve got the Otter Box Defender and hate it. You can’t get to the “vibrate” button easily and it’s not H2O proof. I’m not one to rush out for a new phone and I would not be caught dead waiting in line… Nope, I walked into the store Monday morning, waited 20 minutes, and walked out with my new phone after they set it up. Still, I could have waited till December I suppose, and just gotten the proper case.

Oh, and I got the small one! The big one is utterly, ridiculously huge. No chance I’d go for that clunky thing.

In other news, I’ve got a new stem waiting for me at the shop and I’ve special ordered a Specialized carbon fiber Aerofly handlebar that’ll be in sometime in November… I’ll knock off 50 grams for the bar and rather than add weight with a full carbon stem, I opted to drop another 80 grams with a carbon wrapped aluminum model (that matches the paint scheme of my bike, of course)… So when this November rolls around I’ll be right at 16.2 pounds. A new carbon crank next spring and I’ll be low 15.

If my bike wasn’t badass enough already, it’s about to be unfairly awesome.

All else is fantastic. 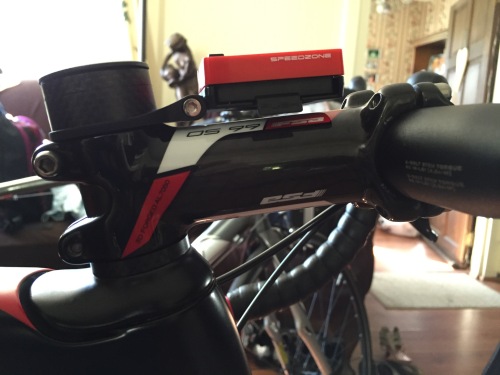 Like Loading...
By bgddyjim in Uncategorized on September 26, 2014.
← How to Cycle Fast: A Noob’s Guide to What to Worry About.. and What to Save for Later… An Absolutely Perfect Day for a Ride – and a Special Thank You… →