Cycling in October, in Michigan…

Michigan has what can only be described as having a spectacular fall.  The colors of the leaves changing only lasts a couple of weeks but it is one of the most incredibly beautiful sights.  We’re about a week away down here in the southeastern corner of the State.  Unfortunately, with the spectacular view comes cold and rainy conditions that don’t bode well for cycling.  We had on-and-off sprinkles and it was chilly (52 degrees) on Tuesday so I chose not to ride when my buddy Mike called and said he was skipping it.  Mike, Phil and I rode yesterday instead, the same route as the Tuesday night ride.  It was sunny and 68 degrees, I rode in shorts.  This is Michigan weather in the fall.  You never quite know what you’re going to get and a forecast never good for more than 48 hours (usually less than 24).  That is, unless they’re calling for rain.  In that case, it’s right on or worse.

Either way, the month of October is prime-time cycling in Michigan if you can dodge the raindrops.  While it’s getting dark a lot earlier (we’re out of light by 7:30 now), cycling in the cooler weather isn’t all that bad.  There’s nothing like getting done with a 50 mile ride without having to hose down the bike because it’s dripping wet with your sweat.  Arm warmers and knee warmers are pretty much required kit in this neck of the woods for the entire month, though on rare occasions, like last night, we’re treated to a last hoorah of summer riding conditions.

While nothing compares to cycling in the summer, I love riding in the fall for the simple joy of it.  I’ve used my  summer well.  I’ve enjoyed my time on the bike immensely and worked as hard as I could to become a better cyclist.  Now it’s time to enjoy the fruits of that labor.  It’s time to go on fun rides with the guys, time to head up north to the rail trail and get a nice long lunch ride in.  It’s time to enjoy cycling for what it is before we’re shut down for the winter.  Two months from now, I’ll be indoors, watching movies while I spin away through lunch time.  Four months and I’ll be longing for a ride outside, digging my driveway out of yet another snowstorm.  I’ll be taking the kids sledding through Christmas break.

The fall is for enjoying every last minute on the bike because come January, I’ll be stuck inside, going through pictures like this, longing for shorts weather: 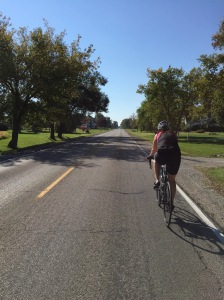 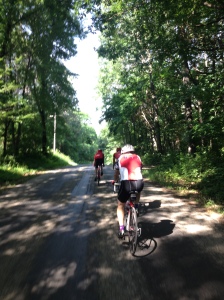