Road Bikes and Road Cycling: What Hurts, What DOESN’T, and What Gets A Bad Rap… Hard Saddles to Cycling Posture.

If I had a dollar for every old-timer that came up to me while I was eating lunch at my local Wendy’s, pointed at my saddle and said, “I’ll bet that hurts.”, I’d have a much nicer bike.  Well, technically I’d have my bike with much nicer parts on it…  Think my Venge with $3,500 Enve wheels and Campy Super Record 11 sp. drivetrain.  Oh, maybe the S-Works frame just for fun.  It happens, on average, once every time I eat at Wendy’s, usually two or three times.  Fortunately, I like most people enough to explain how things really work and I can understand the misunderstanding when it comes to my road bike.  Most old-timers are looking for one of those ridiculously oversized, covers your entire ass with a few inches each side to spare, saddles with eight inches of padding on them.  What they’re obviously missing is that we serious cyclists aren’t into masochism.  If we were, we’d go whole-hog and line our saddles with little thorns so we could look extra badass.  The saddle is just the most popular issue I end up answering though…

If you are one of those who can’t figure out those little “seats”, this is the post for you.

Ah, the tiny, hard-looking saddle.  You think they look like they hurt but that’s because you’ve never ridden on one or had your bike so perfectly fitted and tuned to your body that the saddle works as it should…  They are so utterly, perfectly fitted to our body, it’s like riding on a piece of silk – even after a hundred miles.  Well, maybe that’s going a little far.  Truthfully, not only are they comfortable, the entire principle behind those hard looking saddles is exactly opposite your understanding…  Less padding on the saddle means more comfort.  See, that saddle you’re looking in the photo above is actually fitted to my sit bones and my style of riding.  I have an aggressive posture on my bike, that saddle is made specifically for aggressive postures and is 143 mm wide at the important part where my sit bones rest on the saddle.  Couple that with minimalist padding and arterial blood flows where blood is needed.  In fact, what happens with those heavily padded seats is the cutoff of blood circulation – and that’s why your butt hurts so bad after five miles.  You mistakenly think you need more padding, get a thicker saddle (or one of those awful gel-filled saddle covers), and make the problem worse.  This works great for the two-mile trip to the grocery store, but you’d be miserable before the first rest stop on a 100 miler.  Tiny saddles, when they’re sized properly and on a properly fitted bike, are wonderful.

Show of hands, how many people nose their saddle down, thinking that will leave more room for the important parts?  This is another of those counter-intuitive problems that we see in anything from inexperienced cyclists all the way up to the fairly knowledgeable.  While nosing the saddle down may seem like a good idea, what you actually end up doing is putting too much pressure on your arms and shoulders because you’re always trying to push yourself back on the saddle to keep your butt where it belongs.  While a degree or two may not be too bad, great care should be taken to install your saddle as level as possible.  That said, I have seen numerous reputable sources that suggest a slight nose-down saddle can be very helpful to female cyclists.  With most things cycling, I would never be silly enough to claim that I am knowledgeable when it comes to bike fitting.  I most certainly am not – that’s why I had the pro at my local bike shop fit my bikes…  Point is, before you start tilting your saddle, check with a pro fitter to make sure that you’re not trying to correct a different problem with your setup by nosing the saddle down, thereby creating new problems.

As for nosing the saddle up, now there is something to doing that:

I did this to my bike about a year-and-a-half ago now.  It felt good for about two hours but I went back to level because the nose was putting too much pressure on places that didn’t like having too much pressure put on them.  That said, I had a fairly aggressive posture back then and it’s even more aggressive now…  The nose up does help support the rider when their setup is more upright.

The aggressive setup – is not bad for the back.

I am not a particularly flexible fellow.  I still can’t touch my toes (unless I’m sitting down), yet the setup on my road bike is exceptionally aggressive: 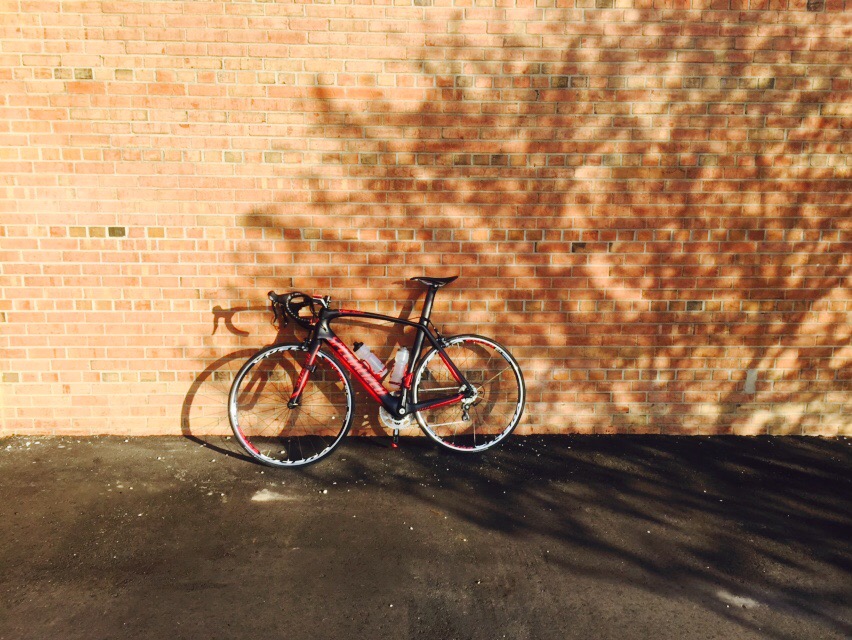 Another assumption people make is that riding like this is uncomfortable, especially on the back.  If anything, my back feels infinitely better today than it did when I started cycling in that position.  In fact, ,my back feels better today at 44 than it did when I was 20.  Why is this?  Hey, I wish I could tell you but I can’t.  All I can do is say try it out, you might like it.  The best explanation I was given, and the one that makes sense to me, is this:  When you’re riding upright, your body takes a lot of the shock from riding over bumps.  This is so because on a road bike, we’re riding on high-pressure tires with no suspension on the bike.  If I’m riding upright and I hit a bump, the shock travels right up my seat post, then up my back.  On the other hand, when I’m riding as shown above, my back acts as one-half of a leaf spring…  With my arms bent, my upper body is able to move up and down with the little jolts so the shock doesn’t travel up my body the same way.

Now, I’m sure the cycling industry has gone with the upright position as the most comfortable for a reason, even if I don’t understand it.  In fact, my first fitted road bike came home with the upright setup, where the saddle was only a couple of inches higher than the bar top because it was supposed to be more comfortable.  Over the course of a few months, I started lowering it, little by little, until it was aggressive and I was comfortable.  That bike isn’t quite as low or comfortable as the Venge shown above, but it’ll do in a pinch – or a rain storm.  The point is, if you want to ride aggressively, you don’t have to settle for the industry’s word.  It’s comfortable to ride low if you work at it and get used to it.