Home » Cycling » The Noob’s Guide to Cycling: What Every Noob Needs to Know About Riding Their First Century…

The Noob’s Guide to Cycling: What Every Noob Needs to Know About Riding Their First Century…

For the longest time, this series on my blog has been about mistakes that I made. I would pass them on with the hope that the information might help others…  well, this post came about through my watching a new, budding noob cut his teeth on cycling.

A friend whom I regularly ride with has a son who is just getting started and after only a month on the bike he rode his first century Sunday.  He rode hard and completed the whole ride, only his fifth time on a bike, and his previous longest ride was only 55 miles.  It was an amazing show of guts, with a few momentary lapses in concentration and a few errors in judgement that cost him finishing with the group.  Still, I really respected the effort – going that far, that fast, that soon was some kind of gutsy.

SUNSCREEN! Nobody in our group, including me, got burned on this oppressively hot ride (91 and sunny, no wind).  We were all heavily coated long before we rolled out.  A sunny century requires sunscreen.  Period.  Up to a metric century I can get away with 30 SPF.  For a full century, I reach for the big gun…  50.

Hydration, hydration, hydration…  I hydrated all day Saturday after my 50 miler, then more Sunday morning before I left.  On the ride, I drank 24 ounces of Hammer Heed and 24 of Perpetuem laced water, then hammered down some water during a nature stop at a park.  With lunch I drank a medium Coke and a PowerAde,  then filled a bottle up with more PowerAde (at mile 57).  At mile 75 I drank a can of Coke, a bottle of sparkling flavored water and refilled my bottles with Gatorade.  It was enough.  Barely.  I drank two small Gatorades and a water afterwards too.  If Gatorade or PowerAde doesn’t agree with you, there are dozens of alternatives.  In seriously hot weather, water is not enough.  It’s better than nothing but you need the electrolytes.  I’ll make this simple:  The quickest way to have a crappy experience is to skimp on hydration.  It’s also the easiest way to bonk or end up plugged into an IV.

Pay Attention!  If you’re riding with a group, remember that paying attention for 5 hours (or more) gets tough.  In addition,  if we get the hydration or fuel wrong, concentration is almost impossible those last fifteen miles.  Riding in a group at speed is tough enough at the best of times, after several grueling hours in the saddle it’s easy to lose focus.  Don’t.  Bad things happen when we lose focus. 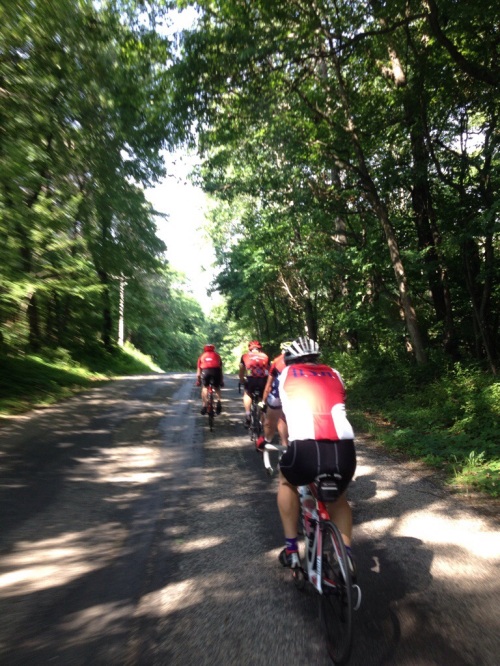 Be Aware of Your Energy Level. This one is exceptionally important. As the miles pile up and the day wears on, your ability to do things other than pedal declines. Precipitously. Stopping becomes something you actually have to think about. Pulling the brake levers with the proper oomph is tough and can have you overshooting your intended stopping point. I’ve seen experienced horses run into guys, turning their rear wheel into a taco. Heck, I had one such horse run into me, in a rest-stop parking lot. Fortunately my wheel wasn’t bent bad enough to call the SAG wagon but I had to open my brakes all the way to make it home. Know this will happen to you. Be prepared for it. Pay attention at stops, at intersections and in the group. When it’s time to stop, do it carefully and deliberately.

Unclip – and on the proper side. This goes back to my last point. As we tire out, even unclipping may have to be concentrated on. I saw a kid fall over the other day simply because he unclipped the wrong foot first. The end of a century is not the time for hotdogging it. The end of a century is time for damage control. Playing around is for when you feel good, not when you’re smoked and half dehydrated.

Signal Properly Till the Finish Line.  As we tire out, many have a tendency to throw signaling to the wayside.  Don’t.  Signal properly, especially slowing and stopping, all the way till the sprint at the end.

Fully clean your bike. Before and after the ride.  Cycling is an exceptionally mental sport, even more than most.  Your mind can push you through hard times or leave you cooked, sitting under a tree.  A century is hard enough under the best of conditions, why give your melon committee more ammo than it needs?  Then, the day after the ride get all of the dried sweat and Gatorade off of it, clean the wheels, maybe even the chain if it needs it.  Tighten the important bolts (I run through mine with a set torque wrench), the stem (all six bolts), the stem cap, the seat post bolts and the saddle bolt(s).  I do this before and after a big ride.  There’s rarely anything lose but I have caught a bolt or two that would have developed into a problem had I not taken the 1m:43s to check them.