Home » Cycling » DALMAC: Simply Put, a 388 Mile Ride with Friends. How I Found the Right Crew…

DALMAC: Simply Put, a 388 Mile Ride with Friends. How I Found the Right Crew…

This won’t be a write-up, in typical fashion.  I won’t be writing about average speeds, finishing a hard 72 mile final day with several thousand feet of climbing in under 3h:45m, about stinky locker rooms (Thanks Boyne City Football, you stinky bastards…  The other team will smell you coming for a mile, that’s for sure.  Next year maybe we can help with a present in the helmets, eh?).

Ladies and gentlemen, this post isn’t about light bikes versus heavy bikes.  It isn’t about high tech wheels, stems, bars, or carbon fiber frames – even though my Venge was one of the cheaper bikes in the group, if you can believe it…

This post is about falling in, and fitting in, with the right crew, because DALMAC alone would be demoralizingly tough.  Brutal.  Without the right friends.

Now, deserving prominent accolades [Cue trumpets and timpani drums] is my wife.  Mrs. Bgddy deserves the kindest, sincerest, kind thanks I can muster (and has received them) for SAG’ing.  As it was, I didn’t take so much as a single aspirin all weekend long.  I’d have subsisted on Aleve had I stayed alone in a tent.

I am with the right crew.  We laugh, ride hard together, or at least Adam and Diane ride hard and we draft them well.  Semantics don’t ya know.  We can still hammer on our own, plenty of us strong guys out there, Chuck, Mike Matt and Phill, Chad…  Then there were this year’s noobs:  Ron, Eli and me… Though we wouldn’t let Eli pull because he was only fifteen and we didn’t want him to burn out (though he did bridge a quarter-mile gap with the three strongest guys going into Lake City -Day Two, so there’s that).

We are all pretty fairly matched up, we ride well together, know each other’s strengths and weaknesses and so forth.  Most importantly, with a few minor exceptions, we all enjoy each other’s company off the bikes as well.

While we all did our own thing up there, we spent every meal together and grew memories that we’ll be able to share when we’re old and decrepit.  Sadly, I only have maybe a decade with our current crew.  Some will slow down and grow too old to bother, so it’ll be up to Diane, Adam, Phill, my wife Ron and me to carry the torch to the next generation…  But I’m going to enjoy every minute of every day until the elders of the group start falling off.

So here’s my version of the “how”…. First, I found people who ride about the same pace I do and I do my best to be an upstanding member of that group. I help when I can and make sure that I’m not an ass. Other than that, it’s not rocket science. It’s pretty simple. Show up, ride hard, do my share and be a good guy. I’ve seen what happens when the group has a jerk in the mix (it is quite sad to see actually) and I won’t be that guy…

I learned a valuable lesson at DALMAC this year about being with the right crew too. The importance of having fun with the people I ride with.

Halfway through the final day of DALMAC, my friend Chuck swerved to miss a pothole.  I was right on his wheel and had no time to react…  I think I saw New Zealand at the bottom of that hole and hit it dead square.  My tool case hit the ground and I almost lost both water bottles.  I hit that hole so hard, my cage in back busted.  It broke.

The entire 20 man group soft-pedaled while I went back to retrieve my stuff and catch back on.  We rode into Harbor Springs together, with a planned stop at Touring Gear, a Harbor Springs bike shop, where I had my cage replaced… 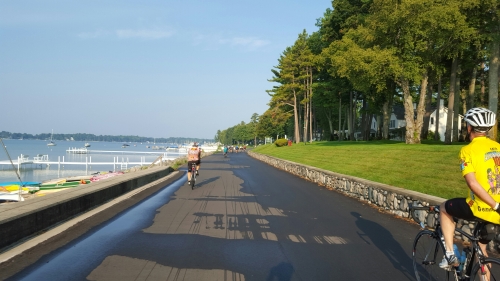 At the bike shop, they were taking a long time getting me sorted and I started getting antsy.  My friend Mike came in and said, “Don’t worry, take your time.  We’ll wait for you…  Matt and Phill are soft pedaling and we’ll get us back to the group.”

They finished a few minutes later and we were off.  We climbed (dear God did we climb) out of Harbor Springs and took “The Chute”:

Matt dropped shortly after this to find someone else to ride with.  He wasn’t in such a hurry and knew his way to Mackinaw (at least that’s what we figured he’d say – he ended up catching on with two friends of his and they finished a short while behind us).

Mike and Phill pulled me through to the “Tunnel of Trees”.  A bucket-list ride for me, it was epically beautiful: 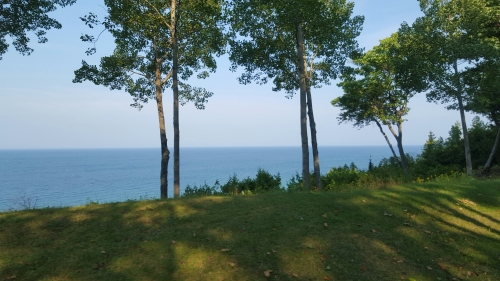 We stopped for an amazing (if extra quick) lunch so we could ride back on with the group.  They were going to “take it easy” because Eli was struggling a little…  They also soft pedaled for a few minutes when we rode up the coast so I could snap these photos: 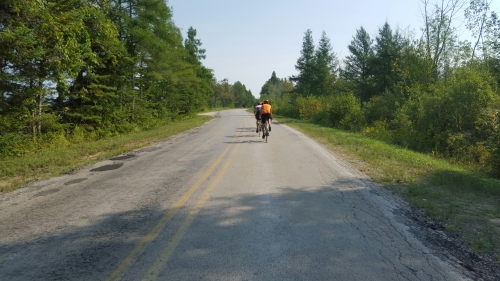 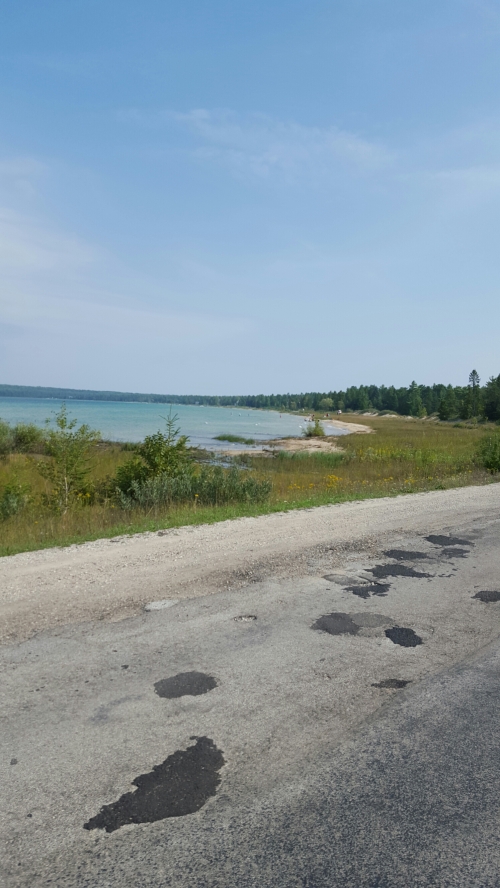 Shortly after this photo was taken and my phone was secured, Diane and Adam put the hammer down.  With a fair tailwind we maintained about a 26 mph average for at least ten miles.  We were cruising along the coast, on the flat roads, at 28 mph.  Even drafting at that pace gets rough, but I hung on for all I was worth…  Then at 71 miles, everyone sat up and they called Ron, Eli and me to the front…

We led the procession down the hill to the finish…  Only there was no Mark Cavendish/Andre Greipel/Peter Sagan bunch sprint…  Just the three of us up front, leading the group in.  Ron and I held back just a bit so we formed an arrowhead…  So Eli could “win” his first DALMAC. 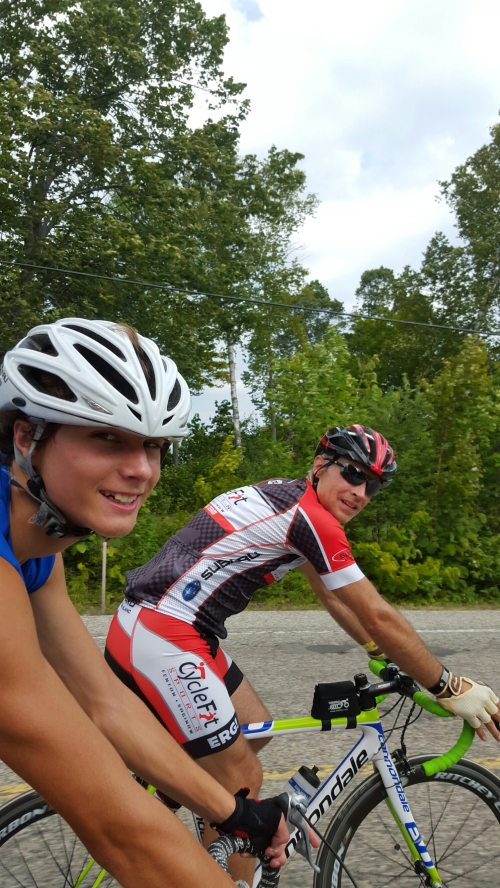 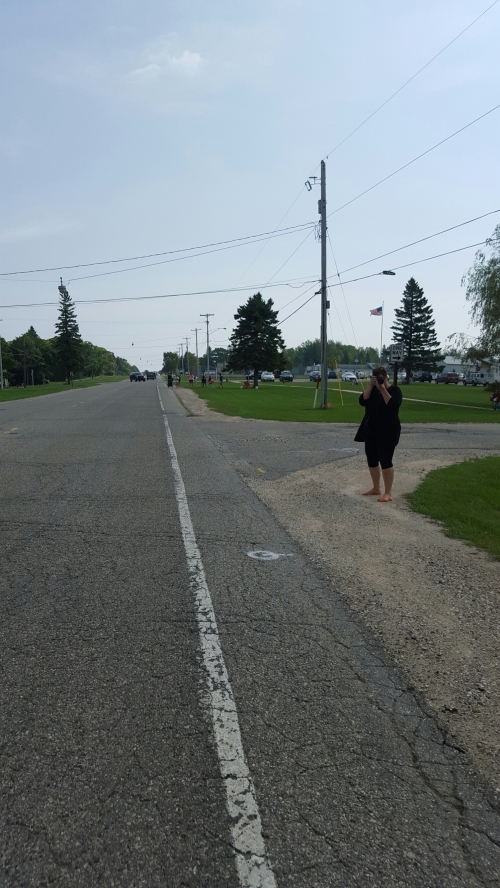 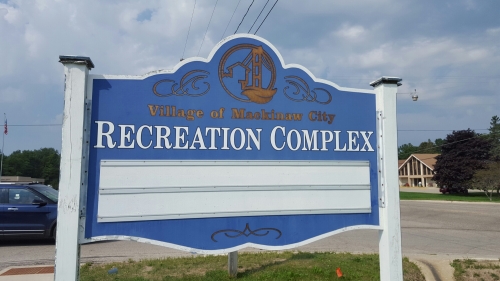 In that middle photo, my wife and daughters were out cheering us in.

Overcome, I got misty.  Couldn’t help it.  The whole crew gave a little bit so we could get to the finish line, and they gave us the lead so our families could get clear photos of finishing our first DALMAC.  Even Ron and I got to chip in for Eli…  And Mike, Matt and Phill who worked so hard to get me there – and for Chuck, Adam and Diane and the rest of the crew who waited for us…

This is how you know you’re in the right crew, and for them, I am truly grateful. 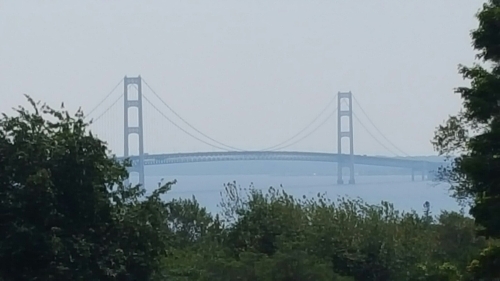 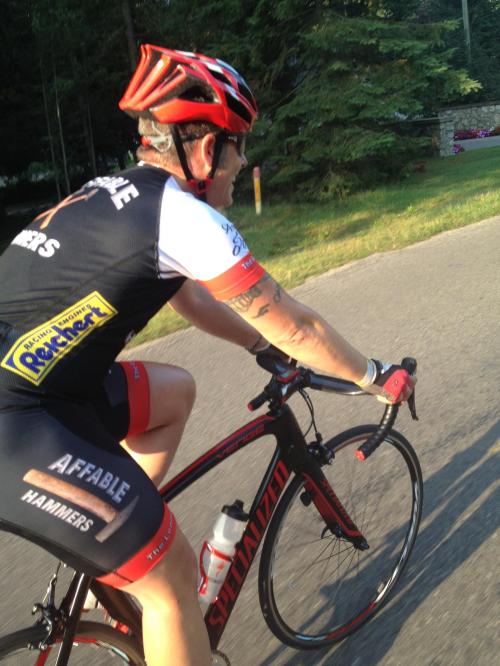 Oh, so heading into the shower, my daughters with me and my wife packing bikes up, my daughter, Bella, asks if I’m going to get something to drink…  I left my money back at the car so I said we’d stop in a bit.

I get out of the shower and she’s standing there with an ice-cold orange pop extended and a root beer in her other hand… and she said, “Daddy, I forgot I had some money.  Here you go.”

Best orange soda I ever drank.

I am a blessed man.

Like Loading...
By bgddyjim in Cycling, Fitness, Recovery on September 7, 2015.
← Sexiest thing I’ve seen in four days (that wasn’t my wife): DALMAC 2015: I Rode Hard and Everything Was Wet… Till Sunday. →