Anyone who’s had a parent with Alzheimer’s knows the medication that keeps them from falling off the Alzheimer’s cliff is expensive.  My dad’s medication, after Medicare cost more than $800 a month (if I remember correctly – it’s been a while) while he was in the medication donut hole.  The point is, that stuff is expensive.  On the other hand, once you get over the side effects, it does slow the progression of the disease.

That said, it is well known that there’s something else, available over the counter without even a prescription, that costs around $800 but only once (not once a month) and actually works better than the medication, if used on a regular basis: 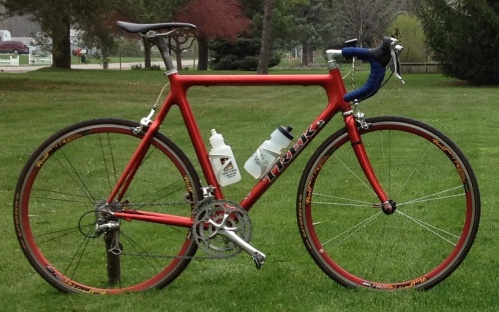 Ladies and gentlemen, meet the common, every day, bicycle.  Actually, my 5200 isn’t exactly what you’d call “common”, that frame is responsible for more State Championship wins than any other frame made.  Still, studies have shown that regular exercise (no easy task, I know) delays or can even prevent the onset of Alzheimer’s symptoms.  The trick, of course, is that one can’t simply start exercising once they’re diagnosed and hope for the best results – you’ve got to maintain your fitness as a lifestyle.  I know, this is hard too…  On the other hand, it’s a lot easier than dealing with Alzheimer’s at an early age.

So, pick your poison.  Fitness now or a medication that costs more than a decent mortgage later.  Of course, on the negative side, you’ll need a new set of tires, a chain and new brake and shifter cables once a year for a grand total of about $100, so there is that…  Oh, that’s $100 a year, not a month, by the way.