The Case for the Multiple Day Cycling Tour: Why Every Cyclist Should Try It Once. With Friends

December 18, 2015 1:00 pm / 13 Comments on The Case for the Multiple Day Cycling Tour: Why Every Cyclist Should Try It Once. With Friends

This year was my first for attempting multiple day cycling tours.  I did two this year, technically.  A two-day in Kentucky at the Horsey Hundred and the four-day DALMAC (Lansing to Mackinaw), one in the early summer and the four-day in the late summer.  They were, without a doubt, worth every penny and the effort and I can’t wait for next year where I’ll do the same two plus I’ll add a third with two separate events back to back – the One Day Ride Across Michigan and the Assenmacher 100 Pre-Ride (two days, 250 miles).

My cycling followed a progression.  I started off on a mountain bike, four days a week, then five and six.  Then came the road bikes.  I went from 100 miles to 200 miles being a decent week over two years.  Last year, 22o miles was a decent week.  This year, 250 with the exception of one week – Labor Day weekend.  446 glorious miles – 385 in just four days.

I have always ridden most days of the week but only rarely would I ride two hard days in a row.  By “hard”, I mean north of 19 mph average over a distance greater than 30 miles each day.  Say I had a century on Sunday.  I would absolutely ride on Saturday but it would be at an easy, slow pace over a short distance.  Maybe 20 or 25 miles at a leisurely pace around 17-18 mph so I could save up for the big ride.

With most of the group above, our goal for DALMAC was four days, 380 miles, and an average pace north of 20 mph for the whole tour.  We were only a few tenths short of that when all was said and done and we managed a 21.7 mph pace on the last, shortest day (72 miles).

The first Day’s 106 miles were pretty rough but only because we had to ride through a gnarly thunderstorm (or three).  The worst, thankfully, came just five miles before lunchtime so we sat and ate through most of it.  With temps in the low 90’s the rain was actually quite welcome and the only time I was cold through the whole day was when we sat down to eat.  The second day was misty and quite a bit cooler (see the photo above).  Humorously, I tried out one of those $30 plastic rain jackets because it was just a wee bit too cool for me, in the mid 60’s.  Sadly, it wasn’t closer to freezing in that jacket.  I will never use that stupid jacket again.  I was sweating so much that I had to wring out my gloves to keep a grip in the drops.  In fact, when I pulled that jacket out at the first stop, a couple of my buddies laughed and recommended against it.  I should have heeded that advice.  The second day, with 106 more miles in, we finished just under 20 mph for the day and I finished with two other friends in a breakaway that succeeded.

The third day finally brought a break in the wet riding conditions.  The temperatures were quite nice, upper 70’s but under cloud cover for the first half of the day.  My wife and I had everyone over for coffee the evening before and we tamped down an insurrection, the notion of shortening the third day’s route.  Eventually we settled on doing the whole ride because, after all, damn the pace, we were out there to ride our bikes with our friends and it only made sense to get in every mile.  In the end, we finished only slightly under the 20 mph target pace.

That third day was my toughest.  While the second day had the most climbing, technically, it was only a gradual climb.  Most of the time we couldn’t even tell we were ascending because the grade was so mild.  Not so on day three.  There were plenty of steep climbs to be dealt with.  Add to that, I was getting tired.  A century is an excellent feat of fitness.  A century in the 5 hour range, even more so.  Three in a row is a grind.

My wife and I had our friends over again that evening.  After I ate my first dinner in the cafeteria, I headed back to the camper and cooked steaks for my wife and kids.  I cooked enough that I needed some help from the boys to finish them off.  I also spent an hour cleaning the grime off of my bike and trying to get the shifting squared away (the road grit was having a profound affect on the derailleurs, especially the rear).

The fourth day, much to my amazement, was really fast.  We only had 72 miles to go, through the most beautiful scenery of the entire ride. 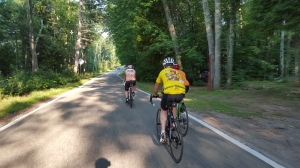 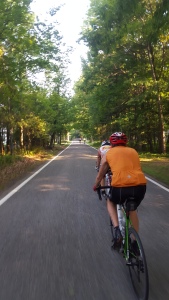 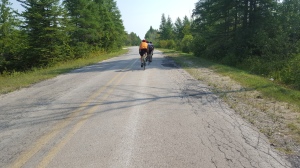 We finished the day strong, the last 20 miles covered in about 48 minutes (we averaged around 25 mph) and it hurt.  I was dangling at the back for much of that last bit.  My legs were absolutely smoked and a rarity on a shorter ride like that, I just wanted to be done.

Then came the last mile.  The veterans brought us rookies up front and let us lead the group home to the finish: 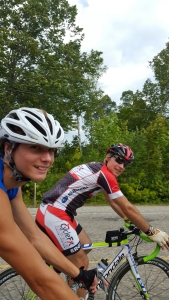 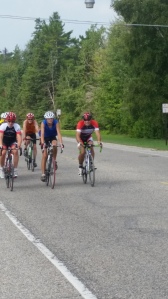 That’s Ron on the outside and Eli (just 15 years old at the time).

I have ridden thousands of miles with my friends, in that last photo the guy in the orange is my buddy Mike, with whom I have logged more miles than with anyone else, including my wife.  My wife and two daughters were at the finish to cheer us in.  I am rarely emotional finishing a run or a ride anymore, I’ve done enough of them that it’s not that big a deal…  I got a little misty after my first half-marathon, after my first metric century on a bike and after my second full century (my wife or wife and daughters were at all three – in fact, my wife was pregnant with my oldest daughter at the half marathon).  For the finish of DALMAC I was definitely wellin’ up.  My daughters gave me huge hugs and my wife a big, sloppy kiss and it was good.

My wife, my best friend, sacrificed her whole four-day weekend tending to me, lugging the camper around so I could have a nice, dry bed to sleep in.  My kids sacrificed two days of their weekend to travel with us.  My cycling friends helped pull me home and made the ride an experience not to be missed.  There is something special about a group of people sharing a grueling effort like.  Every ride with my friends after that, there’s been something different, better.  We’re closer, laugh just a little more, we have many more stories to laugh about while we’re on a normal weekend 70 miler.

I can’t promise you as profound an experience as I enjoyed on your multi-day event but as good as it was, the benefits are worth chancing it.  Find a good group, train hard, and ride that ride with a smile.