It didn’t take long to get my first ride in on the newly repainted 5200.  We put in a great 30 miles yesterday…  Thank God for El Nino winters!  If the rain holds off, and it’s supposed to, we’re meeting this morning to put in another 40.

My wife and I had to move some things from one church to another first thing yesterday morning so while my friends all started at 10, my wife and I couldn’t make it until 11 so the fellas looped back and picked us up less than a mile from our house.  We then headed south into a ridiculously heavy wind 15-20+ mph wind.  Normally that’s maybe enough to sniff at but yesterday it was pretty tough (I think not all winds are created equal – some are heavier than others).  I got wow’s all around from my buddies on the new paint job, Mike, Phill and Chuck and we formed up and headed into the southwest wind…

Just a mile and a half down the road and Mike starts looking over his shoulder. Then he moved a little to the left, which I’m good with because that’s the direction the wind is coming from anyway so it’s a little easier to draft. Then he called Phill to come up and he started talking about ride plans for tomorrow so I’m just sitting in, paying just enough attention to be safe in the pace line…

And Phill made a move for a town sign. I was caught unaware and had no chance. Mike had me perfectly boxed out. I gave Phill a deserved fist bump when we caught up to him.

The group moved fairly well considering the wind and we didn’t miss much since the close of last season. We just fell into our places. Six miles later and I set myself up for a good one… Gaines Twp has two signs, maybe 300 yards apart and I was going to take both.

I was second bike behind Chuck and he’d been up there for a while so I tried to bide my time without waiting too long… I launched early to catch everyone else off guard. I passed Chuck pretty handily and pounded the pedals but I noticed Chuck’s wheel to my right, he was going to give me a run! That’s when my gears started skipping.

When I saw Chuck’s wheel I reached down deep for another gear and went for it. I realized quickly that the more aggressively I pedaled, the worse my gears skipped so I tried to round out my stroke. When that didn’t work, I just hammered it, gears be damned. I held Chuck off by a matter of inches – and almost felt guilty… his effort was plenty tough after pulling for more than a mile.

We both dropped from 25 mph down to about 12 to catch our breath and let the others catch up… Then I surprised him with a second weak sprint before the others caught up. Perfect, two down.

We resumed normal cycling till we hit the Byron town sign but I was leading out into a gnarly cross headwind and had nothing in the tank for a sprint. Mike ate me up, and I let him (hey, sometimes I’m the sprinter and sometimes I’m the lead out). The rest of the ride was pretty tame but my gears were slipping a lot more now… and I figured out the problem about four miles from home.

When I put the Trek back together I went with 5 mm housing instead of 4. This gives a better shift quality but the 5 mm housing caps I was given are too tight for the rear derailleur cable boss. I tried my best to jam it in there but it must have worked loose. As I get into the smaller (harder) cogs on the back, the cable slacked, allowing the cap to come out of the boss… this meant the cable moved and changed the tension on the derailleur so it tried to shift into another gear. Thus, what felt like the gear slipping was actually the derailleur trying to shift.

After I got home and showered up I went to the shop and picked up a different cap. I took three minutes to take the cable apart and change the cap, put the cable back together and voila, no more slipping. It’s crazy that something so simple could cause so much trouble, but there it is.

I knew my chain and cassette were good, I just replaced them about 500 miles earlier, so it had to be in the cable. All bikes that have externally routed cables have attachment points where the cable and housings are kept to the frame:

Okay, so you can see what I’m referring to… you see three distinct pieces of metal (not including the cable). The piece on the left, that’s the boss and it’s bolted to the frame. Then you have that odd looking lever** in the middle, then the housing cap. That cap is pushed into a corresponding hole in the lever… this is what it looks like when it’s right: 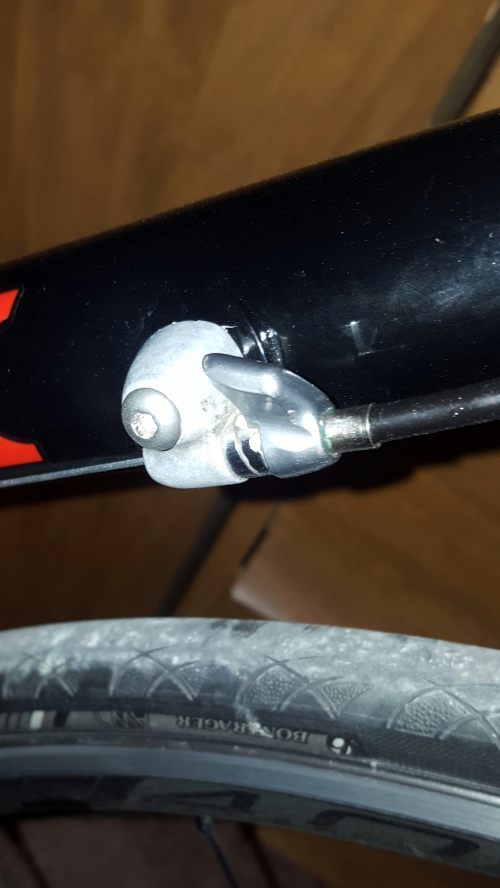 You should be able to see that a lot less of the cap is showing in the photo above… Without getting too technical, derailleurs work by being pulled into position by a cable. The smaller the gear (this holds for both derailleurs), the less tension there is on the cable. As the gears get bigger, tension increases on the cable. When I’m cruising at 18 mph, in the middle ring up front and the middle gears in the back, everything is okay because there’s tension holding the cap in that hole… When I shifted to a harder, smaller gear for that sprint into Gaines, I decreased the tension on the cable and there was a little bit of slack at the cap. When I hit a bump, the weight of the housing pulled the cable to the ground, creating a lever or more precisely a fulcrum at the end of the cable housing cap and the hole in the lever. When that cable dropped, for a split second the tension on the cable was increased and the derailleur tried to shift to an easier gear. Thus, what felt like a slip, it was actually the derailleur doing what it’s designed to do.

Knowing my way around my bikes pays off again. And now I also know that all caps are not created equal.

** The lever… In those zoomed photos, that lever that the cap sits in is a very special lever designed to be used in the event that the rear shifter breaks and cannot be used to shift the bike. There are three positions. The current resting position, then you reach down and twist it away from the frame… this changes the tension in the cable enough to give you two more gears. Kind of neat actually. Most bikes don’t have this feature, it just appeared for a short time in the past – whether it is exclusive to Trek or not, I do not know.

Like Loading...
By bgddyjim in Uncategorized on January 31, 2016.
← Rebuilding My Trek, A Confession and Apology… 38 More Miles for the Trek and Some Humble Pie →