Home » Uncategorized » The Anatomy of a Racing Bicycle, and the Reasons they DON’T Hurt: The Saddle

The Anatomy of a Racing Bicycle, and the Reasons they DON’T Hurt: The Saddle

If I had a dollar for every time someone told me they couldn’t ride my bike because it looked like it would hurt too much, or was asked how I can do it, I’d have a much nicer set of wheels on this bike: 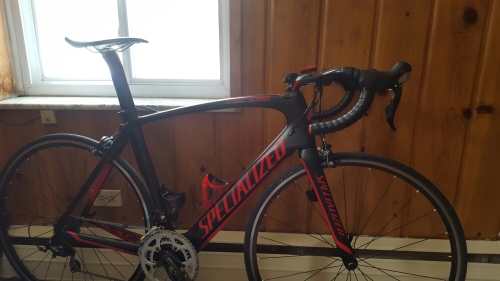 Okay, first things first:  I went through a three hour fitting on that bike, and that was just videos, setting the cleat angle, saddle height and the fore/aft position of the saddle (everything else was perfect, stem length, crank arm length, bar reach, bar width, drop, reach and drop from the nose of the saddle to the bar, etc.).  My cleat angle changed considerably.  Specially designed pedal blocks are used to allow the feet to swing left to right freely and the cleats are dialed in with lasers and pointers so the entire leg, including the knee, operates in the perfect up and down motion.  From there, my saddle was lowered two millimeters and I rode on a trainer.  Videos were taken (more for my benefit, a good fitting pro doesn’t need them) and examined against my fitness, my weight and flexibility.

Everything, and I mean everything, was dialed in to the closest millimeter possible for my body, including my saddle (my sit bones were measured and I purchased the saddle that best matched the width between them and the type of setup I ride with [aggressive posture]).  Flexibility plays quite a bit in that drop from the saddle to the handlebar and the reach (stem length).  While I don’t consider myself all that flexible, I apparently bend well in the right places.  Weight matters too.  I’m at the upper end of my BMW but that has a lot to do with the fact that my legs are much bigger than average and it’s almost all muscle, so it adds weight.  Where this counts is in the belly, and I don’t have much of one.

With that out of the way, we have the most obvious cringe inducer:  My saddle: 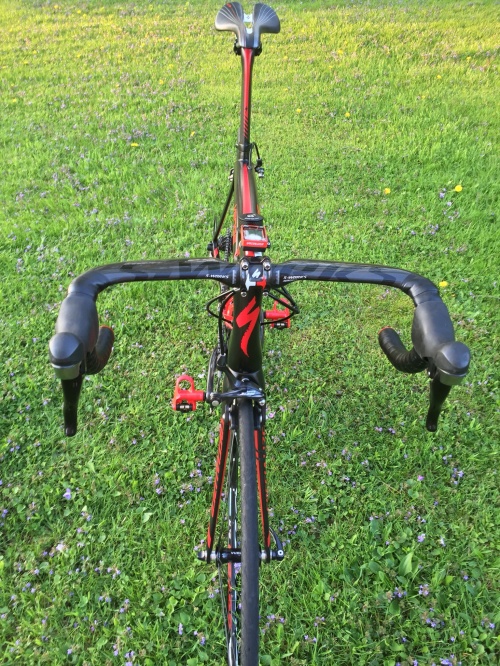 Everyone who doesn’t spend hours on end in a saddle like that, or has a saddle with ten centimeters of padding on it (4 inches), looks at that and cringes.  My saddle has, maybe, two millimeters of padding.  Now, because I have my rain bike at my office today and don’t have any stock photos of the saddle on my Venge, I’m going to switch to the saddle on my Trek for this next part, because the photos are important (it’s the exact same saddle, one year newer, on my Trek): 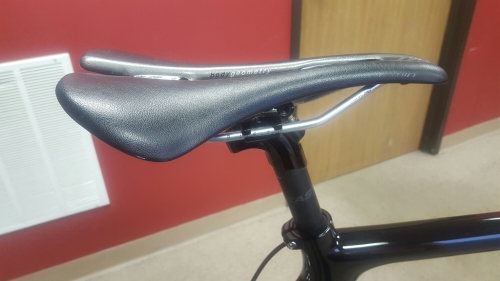 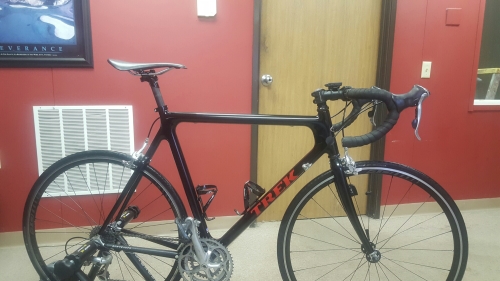 I didn’t do myself any favors with the angle of the bike to the wall and the camera but it should be evident that A) there isn’t a lot of padding on that saddle and B) that it’s not quite level (from the back of the saddle to the front of the saddle, it’s nosed down a few degrees).  This is by design according to the saddle type (contoured).  Now, If I were able to ride a bike like the pros do, with a ridiculous 6″ to 8″ of drop from the nose of the saddle to the handlebar, I would have the nose of the saddle pointing down even farther.  The contoured section of the saddle is actually meant to cradle the sit bones when riding in the drops.  In fact, if we look at my Trek head on, you can see how the wings in the back angle up: 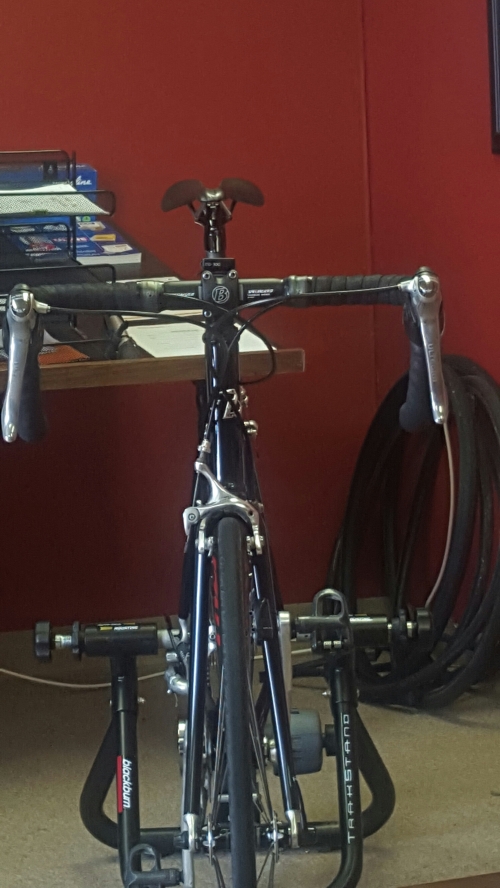 Now, where this gets really fun is that I don’t have the same saddle tilt on both the Trek and my Venge…  There’s a little more saddle/bar drop on the Venge so the nose on that saddle points down maybe a single degree more that it does on the Trek.  We’re only talking a fraction of an inch here, but it matters.  If I were to match the tilts, because the bar is just a few millimeters higher on the Trek, my backside wouldn’t be cradled the way it should be and I would be pushed to the front of my saddle.  Hopefully this all makes sense, the important point is that to get a race bike comfortable, the setup is tweaked so all of the three contact points on the bike (the feet, the hands and the backside) balance out.  With that done correctly, a race bike will feel awesome  Skip the setup and it’ll feel like riding on barbed wire after 20 miles.

From there, all one needs is a decent pair of cycling shoes and some high-end cycling shorts (with built in padding) and that thin saddle feels like riding on butter, and that is a very good thing.

The common mistake people make when contemplating a bicycle saddle is to believe that more padding means more comfort.  This is absolutely not the case!  Less padding on the saddle, a decent pair of cycling shorts and a proper setup mean more comfort.  Too much padding staunches the blood flow to some very important parts of the body.  The longer you ride, the more painful it becomes and all the while you’re thinking you need another ten centimeters of padding on that 20 pound saddle.

Simply put, as counterintuitive as a stout saddle may seem, take it from those of us who spend 300-500 hours a year on a bike:  If it hurt to ride on that saddle, don’t you think we’d have switched to a pillow top saddle long ago?

Like Loading...
By bgddyjim in Uncategorized on March 9, 2016.
← An Older Post that Made Me Smile Reading it again. A Few Thousand Words on Why The Sugoi Zap Rain Jacket is the Best Cycling Rain Jacket I Know Of. →