I’m a big anti-flat kind of guy so generally speaking I put more weight on flat protection than anything else.  My first pair of decent tires were purchased at cost because I know a lawyer who works for them…  The tires were very fast and they were wonderful for cornering but they left a lot to be desired when it came to getting flats.  After my second flat and a busted belt I decided to go in a different direction.  I went through a pair of Specialized Espoir Sport’s next and liked them well enough.  They didn’t corner like the Gatorskins but they didn’t go flat either.  I was quite okay with giving up a little performance to forgo changing tubes on the side of the road because a pebble managed to embed in the rubber and work through the Kevlar lining (seriously).  Then I bought my Venge and that came with a set of Turbo Pro’s.  Now I liked those.  They were rough slicks so they handled great and were decent on flat protection.  If memory serves I didn’t get a flat with those.  They were a bit pricey at the time though so I opted for a set of Turbo Elite’s when the time came.  I got one pinch flat with those but that was more my fault than anything else.

Then, on recommendation from one of the mechanics at the bike shop, I decided to try Bontrager AW1’s.  They were touted for their superior flat protection and extended wear and they lived up to their billing.  There was only one problem:  They’re slow.  It’s like you’re pedaling in mud.  I’ve heard reports of people dropping as much as a mile and a half an hour because of them.  Even so, that didn’t stop me from buying a second set when the time came.  I figured I’d muscle through with a little extra “want to”.  The flat protection on the AW1’s is nothing short of stellar.  I’ve got more than 1,000 miles on this tire since this happened: 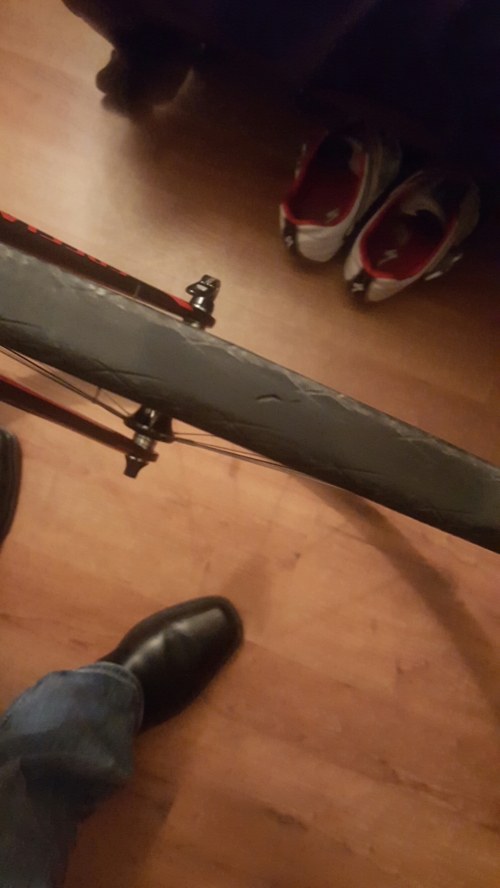 That might be a little tough to see. Let me zoom in a bit…

They’re that good.  Still, as you can see by the wear it’s time for a new set of tires anyway and I decided to go back to Specialized.  Puddle of Mud was a great band but it’s hell to try to ride through.  I’m going back to the Turbo Pro’s – but this year they did away with the 23’s and are offering 24’s and 26’s

I put the new tires on last night. Hopefully I’ll be able to give them a go in the next few days but it’s doubtful. The forecast is atrocious.

So for the record, my experience is: