Cleaning the Bike after the Big Ride…  Pay Attention to Detail.

I test-rode a friend’s bike a while back to help the local shop techs find an elusive “creak”.  I found it, and the source (worn out pedal bearing) and in the process found that his rear derailleur was out of adjustment.  Worse, the barrel adjuster was frozen solid.  This is what the adjuster on my Trek looks like:

His was dirty, and corroded with road debris and sweat.  He never cleaned it and thus, it froze up on him.  The repair took the owner of the shop more than a half-hour and he has access to tools most of us don’t.  Cleaning and lubing the barrel adjuster once every couple of months takes three minutes, if that.  If you look closely you can even see the fresh lube between the cable housing end cap and the barrel adjuster.

The bike looked like this, a while before that photo was taken:

My Venge presents an interesting problem as well…  The brake cable exits the frame in a lousy spot that is prone to collect sweat and salt from the dried sweat.  I went for a year and a half without cleaning it once and completely froze the bolt into the bolt hole.  It took a mechanic more than an hour to fix that.

Loosen the brake cable nut so the brakes open all the way up.  Take out the bolt that holds the cable housing zert in place:

Clean the bolt hole and all around the zert.  Put the bolt back, tighten the brake cable and Bob’s your uncle.

No stuck bolt, no worries.

I have to pay attention to the little details when I clean my bike if I don’t want my bike sitting in the shop when I’d rather be riding it.  And I don’t. It’s a matter of a little time and energy now or a lot of money over the winter when I have to pay someone to get it running in tip-top shape.  I opt for the former over the later.

Other items to keep an eye on and clean up once or twice a season:

If you don’t know how to do any of these, YouTube.  It’s not as difficult as many think.

The Best Assenmacher 100 Yet…  No Noodle Salad, but Coney Dogs’ll Do.

Last year for the Assenmacher 100 the whole Affable Hammers gang left right at 8 am.  We started out with 40 and within 20 miles we caught and picked up two more groups.  We had a full peloton of more than 70 cyclists in a double pace line.

Cars couldn’t pass and motorists became obviously agitated trying to get by us.

This year we decided to stagger the groups so that didn’t happen.  We also split up the A’s and B’s, not so much to shrink the group but so we could enjoy the ride rather than finish with our tongues hanging out, completely dusted.

It turned out to be an excellent idea.

We had a deep group and the strongest tandem couple on the whole course:

Ladies and gentlemen, we had a 10-14 mph wind in our face for all of 54 miles and they pulled the whole way.  I was second or third bike for 45 of those miles before I finally went back for a rest, and we averaged 19.4 when we pulled into the rest stop at 57 miles.

We fueled up, filled our bottles, and let some water back out and rolled – but not before we took a minute for a group photo: 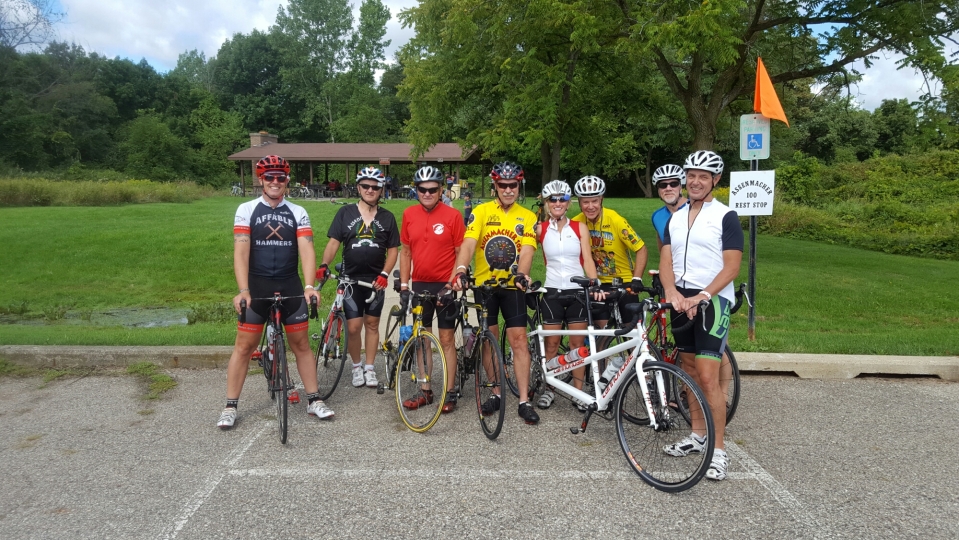 20 miles after that photo, Adam was done.  Put a fork in him done.  We were sitting at 19.8 mph but had a wicked tailwind.  Dave, the middle guy in yellow and I took the front and pulled for five miles.  I headed back a few bikes and took a spot in front of Adam and Diane so I could make sure they got the best draft possible.

We were cranking out miles north of 24 mph.

This is why I chose to go along with a B group.  I could have gone with the A guys. I’d have been spit off the back somewhere around 80 miles and I’d still have ended with a 21 to 22 mph average.  I’d have been hanging on at the back the whole time, tongue hanging out, and I’d have been spent.

Instead, we finished the hundred miles at 4:58:10 and I was useful to my friends.

I enjoy helping people I like ride faster than they would if I wasn’t there.  I like being a contributing member of the group.  In the end, being able to say I was useful at 20.2 mph is way better than only being able to say I finished with a 21.5 mph average.  Any day of the week and, in this case, twice on Sunday.

So, back to the title…  No noodle salad on hand and we had tacos for dinner so noodle salad would have been a little off.  However, two minutes after we pulled into the parking lot I was munching on two coney dogs, and they were good.

That was good enough.

This will go down as one of my most enjoyable Assenmacher Hundreds.  I worked hard but I had big fun.  And my buddy, Mike, recovering from open heart surgery, was at one of the corners cheering us on.  It was a special day, all around.