Last night was my buddy Mike’s triumphant return to the club ride.  He called me on Monday to lay down the ground rule:  No waiting for him.

Part of me wanted to ride with him.  To wait.  A bigger part of me was like, “Well okay, brother!”  I wanted to try to stay all the way with the A’s.

The warm-up was a quick out and back six miles.  With the exception of the southeast wind, the only interesting part was riding with my friend again.  It was awesome.

We rolled out at 5:30 as one big group.  There had to be 30 of us.  The rollout was fast, especially with the tailwind, but I was holding easy and feeling excellent.

Then we hit the the cross headwind from the left and I was in the wrong lane.  Worse, after a decent turn at the front, I found myself directly behind Time Trial Bike Guy.  Dammit.

In the headwind he let a gap form because he was… Anyone care to guess?

If you guessed “because he was in the wrong gear – because he was on a damned Time Trial bike”, two points for you!  Fortunately I didn’t hesitate and immediately went around him but the lead group was at 25 mph into a 12 mph headwind which meant I had to crank it up to 28 to catch up and I spent too much time in the red zone.  I never recovered.  I hung on for another four miles but I was cooked.  The gap that TTBG left decimated the group and what was once 30 was down to twelve or so.

In those four miles I was almost to the front and my breathing and heart rate were spiked.  I hung on till I had nothing left and motioned to the guys behind me to come up.  Then I sped up so I wouldn’t leave a gap and pulled out of the line to slip off the back.  If I can’t do my fair share, I’ll ride alone. 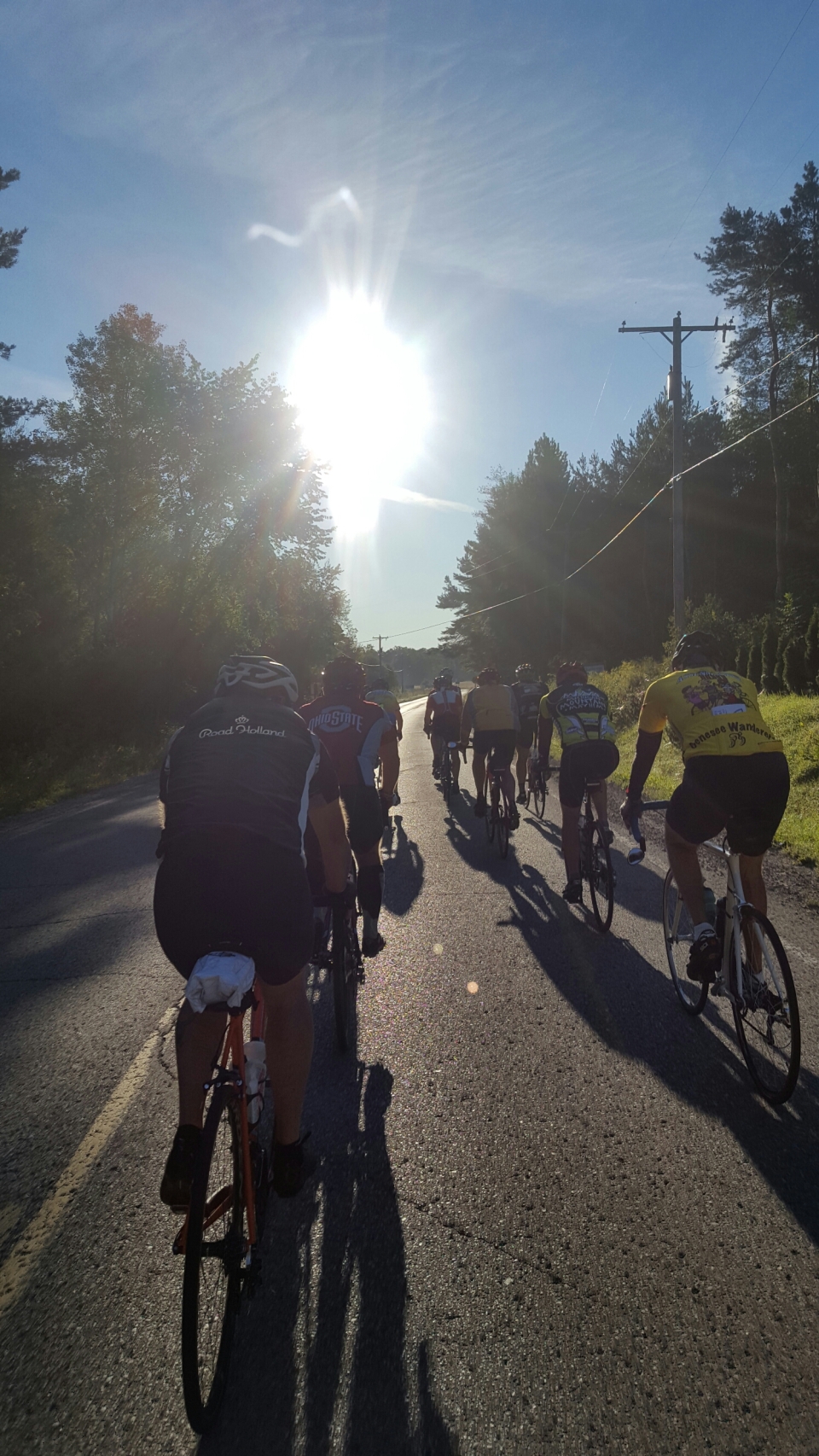 This is not what we look like with TTBG in the group….

After a few miles several guys who dropped before me had formed a decent line so I waited for them to catch me and hopped on the back.  Much to my consternation TTBG was with them as well.  Dammit.

Then, with seven miles to go, the A guys came flying by…  Every single week this year, I’d let them go.  Not last night.  I got on my horse and stayed on with them.  All the way to the finish line.  With the exception of getting stuck behind a farm tractor momentarily, we never dropped below 24 mph and a good stretch was spent north of 30.

Anyway, a while back a friend  asked if TTBG was still a knob.  The answer is tricky because he has good days and bad, sometimes good moments and bad.  I think I figured out part of the problem last night:  It appears as though he lacks the desire or capacity to think of the others he rides with while he is on his bike.  It’s not necessarily that he wants to be a lousy cyclist, he just lacks the capacity to not be a lousy cyclist.  The truth is, he’s a really nice guy, he just does exactly the wrong thing, often, when he rides with the group.