Understanding Pace Line Cycling; a few How To and Where to Be Tips for Cycling with an Advanced Group!

October 26, 2016 8:00 pm / 4 Comments on Understanding Pace Line Cycling; a few How To and Where to Be Tips for Cycling with an Advanced Group!

I had a very interesting scenario unfold last night at the club ride that was the impetus for this post.

An older woman who has been a cyclist for some time and is currently the stoker on my buddy, Brad’s tandem (and a good one at that), rode with us last night for the final club ride of the season.  With her years of experience and riding with Brad on the tandem, I expected that she’d fit right in.

My expectations were clearly too high.

She was all over the place.  Hanging out in the wind half the time, to the left side, to the right side… trying to horn in on someone else’s draft when she started tiring out…  I couldn’t believe what I was seeing.

Now, it gets better because I ride a lot with Brad… she slid over next to me and started carrying on a conversation (we were in a single file pace line).  As she starts to tire out, she began crowding me out of my spot in the pace line.  Befuddled (and with plenty of gas in my tank), I opened up a gap and said there you are, if you want my spot so bad, take it.

I stayed away from her the rest of the time she was with us, which wasn’t very long the way she was riding….

Being me, I want everyone to fit into the group.  I want to be welcoming, as others were with me, and to be accommodating wherever possible.  That makes my pet peeve, having someone in the group who doesn’t understand how they fit into a group, a little difficult.  It’s a struggle, though I’m glad to have the problems I do.  Everyone should be so lucky.

In any event, before I get into this simple post, please allow me the dalliance of an explanation:  I am not talking about the old ladies’ no-drop 14 mph average ride here.  We’re talking about the big boy and girl “you’d better keep up or we’ll see you later” ride.

With that out of the way, something occurred to me before I was able to get upset about the way things were unfolding:  The woman in question was used to riding with the 15-16 mph average C group, where hanging out side-by-side is not a big deal.  With the 22 mph average B crew, especially when you’re jumping up a group, there’s simply no room for that – even I have to be careful to pick and choose when I want to ride up alongside someone for a chat.  Too long doing that and I’d drop too – which is exactly what happened to the subject of this post.  She was off the back within ten miles, and we didn’t wait for her (my wife went back and rode her to the parking lot, but even my wife noticed small issues, like she was often on the wrong side of the wind to get a good draft).

When I see people riding like this, I assume there are others, and unlike the government, I actually am here to help.  If you’re new to a group, try these simple suggestions (oh, and just because I call them suggestions, it doesn’t mean you should choose to be a punk and ignore them…  When you jump out of an airplane they “suggest” you pull the ripcord before you hit the ground.  Go ahead and try to cheat that one):

The first lesson of cycling club is:  Do as the others in cycling club do.  If you see a perfectly smooth line of cyclists executing a perfect pace line, don’t try to show everyone how awesome you are by riding next to someone else.  Get in the pace line and wait until there’s a break and others sit up.  You won’t look awesome as you’re fading off the back over the horizon, so don’t try to be cute. 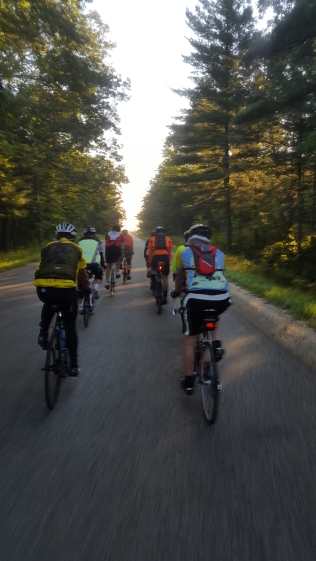 The second lesson of cycling club is:  Don’t ever, if you’re in a double pace line, ride in the middle of the two lines.  The only exception is if there is an odd number of cyclists and you’re the last one in line.  As soon as the two at the front come back, either make a gap for them if you’re too weak to pull through or pick a side.  If you try to stay in the middle with cyclists behind you, you will hear about it and it won’t be pretty.  Expect lots of cussing and talk about the social status of your mother.  And know this; You deserve it. 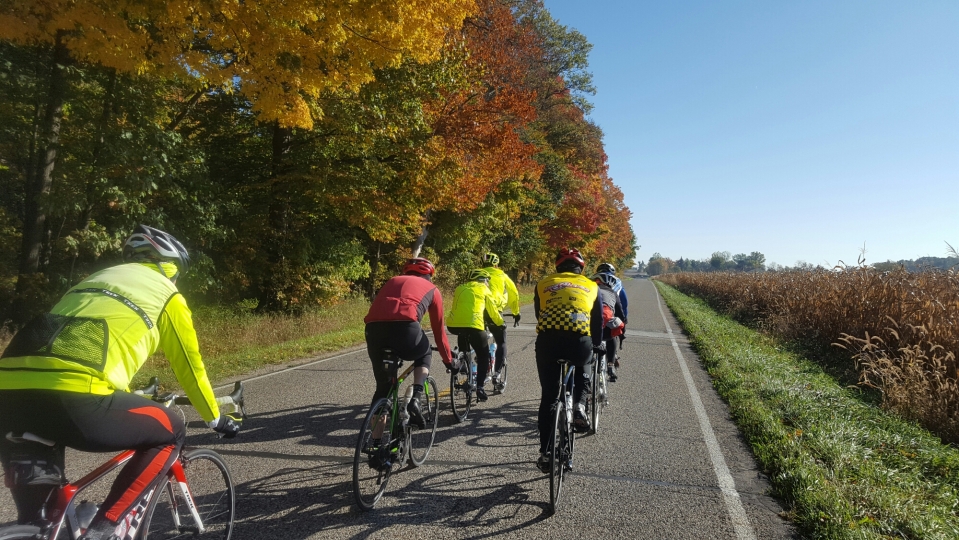 The third lesson of cycling club is:  The goal is to make it to the finish line with the group.  If you’re struggling to hang on, stay at the back and out of the way so the others can work.

The fourth lesson of cycling club is:  Be someone the others want to have around.  Be selfless as you can without getting yourself dropped.  Ride well and be considerate of those riding with you…. this is the best way to not only be invited back to ride with the group on the scheduled night, it’s the best way to get yourself invited to the weekend rides as well.

The fifth lesson of cycling club is:  Don’t try to pull too long at the front when you do pull through.  If you’ve paid attention to the first four lessons, the group will want you to ride with them.  You do no good off the back and on your own.  We were all once where you are, just doing your best, struggling to hold on.  We know for a fact that your time up front will improve as the months roll on, so be smart about it…  Ten, twenty or thirty seconds up front is plenty for noobs.

These tips are all for advanced pace lines.  When you’re in the no-drop rides, they’re social events.  When you’re in the advanced rides, the socializing happens before and after – and between hyperventilating breaths while your out on the road, whilst (and at the same time) trying to keep from getting your tongue wrapped up in your spokes.  Don’t try to do too much, just your part will do nicely.

This has been a cycling public service announcement brought to you by Fit Recovery.

Cycling season 2016 is officially over next Tuesday, our night ride.

To fit last evening’s ride in we had to start at 5:00 on the nose, no warmup.

We had a fantastic crowd, considering.  My wife and I rode, along with my friends, Mike, Phill, Chuck, Chuck, Mike and Diane on their tandem, Karen, Gary, and Jonathan.

We set a fair pace but that lack of a warmup really made it tough.  I struggled for the first ten miles but oddly, only when I was at the front.  I took my lumps of course, but I was always huffing and puffing by the time I went back to hide again.

Karen dropped first and my wife went with her so she wasn’t alone. If I had to guess, this was about eight to ten miles in – and what intrigued me about the fact that she dropped was how she was riding…. she was all over the place in the pace line, off to either side rather than in the draft.  This is a pet peeve of mine, but more on that in another post.

We kept it to a fair 21-22 mph and it was a wonderfully paced ride.  Nothing too difficult but hard enough.  Coming into Shiatown we pulled off to the side of the road to wait for Gary who had struggled through the hills and fell off the back.

From there, we’ve got a nice little quarter-mile descent followed by a steep-ish climb that settles down into another half-mile of up but at a milder grade.  After we crest that, it’s a slight downhill for almost a mile and a half where we keep it pegged, normally, between 26 and 30 mph.  Last night we were dealing with a bit of a headwind so the speed was a bit more subdued, if harder to hold at the front – and I was up there.  This is always a tricky spot for me.  In that mile and a half we’ve got our first sprint heading into Vernon.  Normally I like to be about four back – this gives me a great draft but I’m not so far back that I have to weed through a bunch of other guys going for it as well.  Where I don’t want to be is up front.  I took my mile turn and headed back for a quick recovery.  I did a couple of trick breathing exercises to clear the CO2 and waited  for my spot…  My timing was perfect and I shot around the front at 32 mph.  When I was sure I had a good gap I checked over my shoulder and sat up for the last 40 feet or so.

Gary had fallen off the back again and Chuck went back for him (that’s the guy on the left in my header photo).  Gary was alright with riding alone and sent Chuck back to us… just two miles up the road he joined back up with us huffing like he’d been pulling a dragon behind him.

Fast forward, passing over some boring miles to the final sprint of the season……

I was caught out front yet again, because I can be stupid that way sometimes, leading into the last two miles.  Again, I didn’t want to take a sissy pull up front to rest so I settled in for a mile to try the same thing I’d done just ten miles earlier.  Out of nowhere I see Chuck’s wheel on my left shoulder and he’s charging hard.  I figure he’s going to make an early move so after three-quarters of a mile up front I had to jump onto his wheel.  He created a substantial gap at 26 mph and just twenty seconds into his charge he arm-flicked out.  He set me up (that what I think anyway, we still had a quarter-mile left to the sprint).  Rather than try charging on alone I waited for the group because I was fairly smoked.  I’d spent a lot of tough time up front and if I tried to stay off the front I’d have been swallowed up by the pace line well short of the finish.  The group caught me and I assumed my position about four guys back and tried to recover my breathing.  The launch was just around the corner.  Ten seconds…  Five… Three – Two – One…

I jumped out of my saddle and gave it everything I had but the second Chuck was watching for me in his little helmet mounted mirror – he was only a half-second late starting his charge.  We flew by everybody else and I was putting every ounce of push I had left in my burning legs into getting the pedals around.  Chuck matched me perfectly…  I tried to dodge around him to the left but I just didn’t have enough to make it around him.  He was too strong and I crossed the line just behind him.  It was a fantastic finish to the season.

As we made our way to the parking lot it was all high-fives and fist bumps, laughs and tales from another fantastic club season….  This has been my most enjoyable season to date.  It just keeps getting better, so I can’t wait to see what next year holds.  One thing is for certain though, if I’m going to enjoy it there won’t be any time for vacations.  I want to be even stronger next year – and that’s a good enough goal.