‘Tis the Season… For Mountain Bikes! Well, for Roadies it is.

Sadly, its lighter, faster sibling is hung up till springtime…

I brought my 29’er to the office on Tuesday morning so I could get it cleaned up for next weekend after a particularly muddy ride on Sunday.  Just for fun I lowered the stem the rest of the way, just to give me a little more drop.  I also rotated the handlebar back just a smidge for the same reason.  ‘Tis also the season to tinker with your bicycles, because nobody ever got good at wrenching on a bike by paying someone else to do it.

As an interesting side note, that’s a Rockhopper 29’er right there.  That’s my “good weather” mountain bike.  It’s faster than my 26″ Trek 3700 on dirt roads by a little more than a mile an hour.  On the other hand, the 26″ Trek is vastly more nimble when it comes to handling and probably a little more fun to ride because of that fact.  The Rockhopper is a decent mid-range mountain bike.  While many of the components come from the entry-level Rockhopper, there are upgrades in the suspension fork and the brakes.  Mine has premium discs (the cheaper ones warp when they’re used till they’re hot and then get splashed with water), hydraulic brakes and a beefier fork.  The Trek, on the other hand, is entry-level for the high-end mountain bikes.  While it doesn’t have much in the way of features, it’s mechanically perfect.  Working (if cheap) wheels, brand new shifters/cables/brake levers, a new bottom bracket….

Speaking of the 3700, I decided to bring that one in the next day to get it cleaned up for the winter trashing as well, and to remove some useless extra weight (chuckle).  Take a look at this photo and tell me what’s wrong (other than the dirt):

The correct answer is:  “That bike has reflectors on it and the noob detection device hasn’t been removed from behind the cassette”.

The removal of the reflectors is quite simple:

The Noob Detection Device (NDD) is a different story.  Normally, I’d just show a couple of photos of me removing the cassette and taking that worthless piece of plastic off of my bike…  It takes about three minutes.  Unfortunately I didn’t have the right cassette nut so I had to cut the NDD off with a knife and pull it off with a pair of pliers.  It took a bit more than a few minutes.

Anyway, after that I cleaned the chain, lubed it and the derailleurs and cleaned the rest of the bike and dropped the stem one more spacer:

Notice the noob detection device is not on the rear wheel anymore?  If you’re offended, likely because you still have yours on your bike, the spoke protector is useless (they’re there for the attorneys).  The reason they aren’t necessary is that you know how to properly adjust a rear derailleur, including the fact that once you’ve set your set screws, the likelihood they’ll need to be moved or adjusted later on down the line is nil.  If the set screws are set correctly, your chain can’t over shift into the spokes.  If your chain can’t over shift into the spokes, a guard to protect from the chain shifting into the spokes is?  Anyone?

Useless.  This is why they are noob detection devices.  Now, this isn’t to say that an overly concerned cyclist can’t leave theirs on the bike – you can.  Just know that all of the good cyclists are chuckling at you (whether out loud or in the privacy of their gray matter).  That’s okay though, better safe than sorry, I always say.  Chuckle.

Now, when it comes to the reflectors I always remove mine.  I don’t ride in the dark without a headlight, a blinkie (taillight), and a reflective jacket that lights up better than any silly bicycle reflector on the market.  In other words, my reflectors are useless…  Even if the State Bureaucracy requires they’re sold on the bike.  The Trek, my first decent bicycle, was the only bike that still had them: 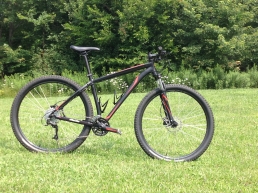 However, upon further consideration, I should caution you before you remove a safety device or safety sticker from your own bike… because someone could do something stupid, get hit by a car and sue me because they read this post.  So definitely don’t remove any of that bullshit if you’re stupid enough to need it.  By stupid I mean:

Look, please allow me to apologize if you took offense at some of the sarcasm in this post.  I was simply being funny by poking fun at the absurdity of a few things that I find silly – especially when it comes to those stupid yellow safety warning stickers!