That First Big Ride of the Season.  Better Eat Your Wheaties!

Our first big ride of the year was Friday.  Nothing too ridiculous, 36 miles, but that’ll go a long way to knocking the rust off… and it’ll definitely let you know how diligent you were with the training over the winter.

If this is an indicator, it’s going to be a good year for me.  Mrs. Bgddy too.

My friends spent my first four years of my cycling taking a lot of time up front, pulling me around various courses.  Two three years ago I started doing my fair share.  Last year I started paying that back.  Well let’s just say I’m excited to continue on that path, doing more than my fair share this year.  It was a productive winter for me.

Saturday was 20 on the mountain bikes and back roads with Mrs. Bgddy in perfect weather!  A little windy, yes, but 63 sunny degrees.  It was my first ride in months without tights.  In fact, it was so nice we actually pulled off our arm warmers within a mile.  Glorious. 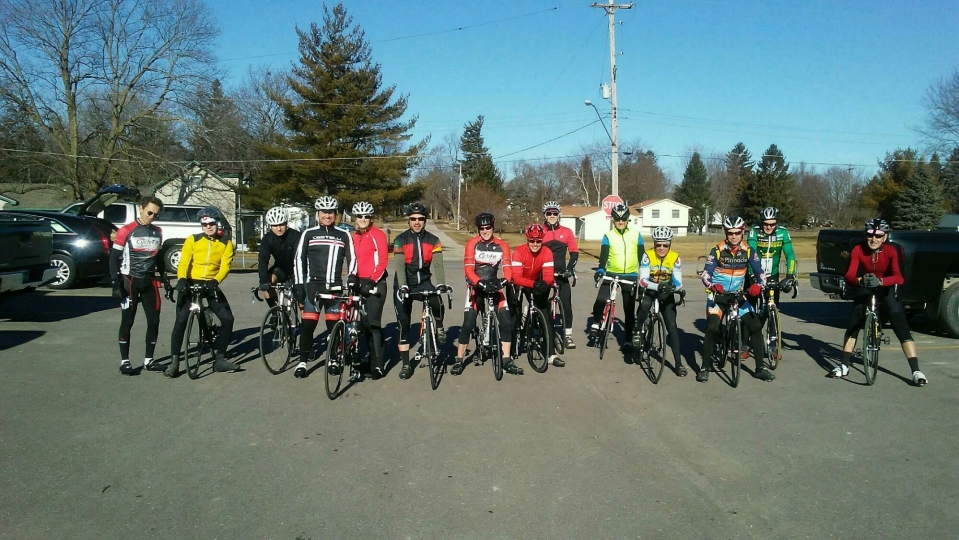 Sunday’s group was awesome – fourteen there, plus Mike, who took the picture.  It was beautiful.  A little on the chilly side (I think it was 45 when we rolled out but it made it up to 55 before we were done).  We quickly worked up to 21 mph and pretty much kept it there for the first half of the “into the wind” part of the ride.  There was an upside and a downside to that, though.  The upside was that four bikes back, it was fairly easy going.  The downside was that there were more than a few guys hiding at the back.  I settled, early on, to stay in the front rotation and just take quick turns up front so I didn’t burn myself up too soon and I didn’t have to mess around with the fracas at the back, with five guys trying like hell not to go to the front (it’s always a little choppier when you have a quarter of the group trying to hide at the back).

Twice I had no choice – I had to get to the back for a rest.  I’d tried to spend too much time at the front.  I don’t know if this is just me, but I feel there’s a time where I feel I should go to the back and rest.  If I push through that though, I can last quite a bit longer before I actually have to head back for a rest.  This could, of course, just be middle of the season phenomena, I don’t know.  Either way, it didn’t work on Sunday.

Once we started heading back with a decent the pace really picked up.  With a crosswind we managed to keep it around 23 but with the tailwind we were often up to 25 or 26 mph and there were a few times when it got ugly for me.  I almost thought I didn’t have enough… and then Greg headed for home and the pace moderated a little.

Before I knew it we were on the home stretch.  I didn’t bother sprinting for the last sign, I’d had enough.  I was done.  We rolled into the parking lot with 37-1/2 miles and a 21 mph average.  An awesome way to start the season.

Of course, I wasn’t done…  When I got home, Mrs. Bgddy asked me to go back out with her so she could get a ride in.  I put in another 16-1/2 miles but those were markedly slower.  It took us a whole hour to get those done, and I needed every second.  I ended up with a little over 110 miles for Friday, Saturday and Sunday and 164 total miles for the week.

I’ll have a Brontosaurus Burger, with a side of free-range chicken fries and a grass-fed, medium-rare side of porterhouse!!!

Let me get that to go.  I’ve got about 184 miles to put in before I can actually afford to eat that….