Witnessed yesterday, live and in person, picture this:

A man rides down a short, steep hill.  One hand on the hood, feathering the brake, the other holding a can of beer.  He picks up speed coming down the hill (I needed and used both brakes) and promptly hit a spray paint marked speed bump at what looked to be 15 to 20 mph.

Long story short, he stopped his bike the rest of the way with his face.

As he sat there on the ground bleeding on the pavement, another cyclist walked over with a half-crushed can, head oozing from the can’s opening and hands it to the dazed man… who says, “You didn’t spill all of your beer.”  It was priceless.

The injured man finished the ride on his bike.  The crash was at mile 60(ish) of 100.  One could hardly call the crash an “accident”.

My friends, please don’t ride stupid.  The idea is to keep the rubber side down.  Oh, and if drinking and driving a car don’t mix, you have to be worthy of the Darwin Award to ride a bike and drink.

Stupid is as stupid does, Forrest.

On a brighter note: 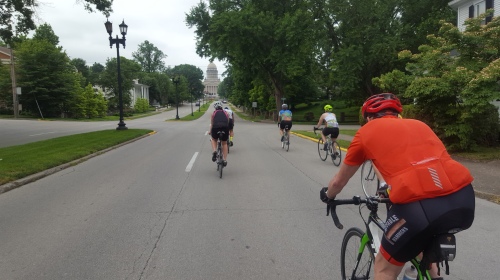 The woman in pink and black up ahead is Mrs. Bgddy completing her first century.

Like Loading...
By bgddyjim in Cycling, Fitness, Humor, Injury, Mountain Biking, Sports, Triathlon on May 28, 2017.
← Defining Fitness through Quality of Life – or Better, the Other way Around The Noob’s Guide to Cycling:  The Godforsaken Unfindable Bicycle “Click”.  How to Find It (BY Throwing the Kitchen Sink at It).  →