The Anatomy of a Road Bike: How to Make Yours Fit, Cool and Comfortable

Technically, this post is “how I did mine”.  All I really have to offer is my own experience.  Take it and use it if you like…

I want to show you something intriguing.  First, have a gander at my Venge:

Looking at those two photos, I’d bet you think there’s more of a drop to the Venge (saddle tip to bar top) than the 5200.  Let’s look at the two bikes with some reference lines, in the form of the overhead door to my warehouse at the office: 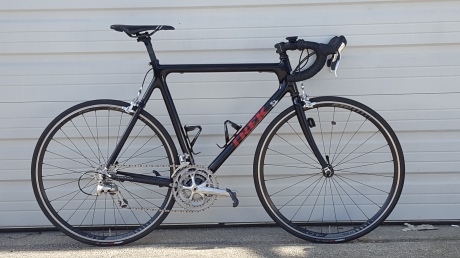 I set the photos up side-by-side to illustrate something of an optical illusion.  I do have more drop to the Venge in reality, but it’s only a 5mm difference.  Where this gets fun is to look at the hoods.  I’ll spoil it, they’re on the exact same plane.  On the Venge the bar top/top line of the drop follows the stem angle (as it fashionably should).  On the Trek, I’ve got the bar tilted down just a bit and I did it by and for feel. It’s still well within conventional awesomeness as the bottom of the drops are well within the few degrees of horizontal allowed by decorum.

I took a couple of photos that show the optical illusion even better:

In other words, I’ve got almost the same setup on two vastly different bikes.
The Trek is a 58cm Traditional frame race bike, meant for GC contenders.  The Specialized is a 56cm compact frame, a sprinter’s bike – and almost fifteen years of technology separate the them.

The stem on the Trek is 80mm, 100mm for the Venge.  Crank arms are 172.5 on both.  Handlebars are 42cm, though the reach is 5mm shorter and drop is 5mm shallower on the Venge – and yet with a little tilt of the handlebar and a carefully chosen stem, I managed to get the hoods and drop bars ridiculously close on both bikes.

The trick is knowing what to tweak, and how, and that knowledge isn’t necessarily easy to come by.  In my case, several different things transpired to get me to a point where I had a decent education when it came to bike fitting.

First, I had desire and time after work to research.  I wanted to know what I was doing.  Second, I had a decent bike, in the Trek, that was set up for the traditional upright riding style, and that wasn’t me.  I wanted low and fast, so not only did I have the desire to learn, I had the desire to change what I was sent home with.

Next, I had some flexibility.  Not much, but enough.

I had a shop owner who was willing to show me the ropes of how fitting a bike worked while he was fitting my Venge to me with what became Specialized’s new fitting process, the BG Fit (BG standing for Body Geometry).  I was one of his guinea pigs.  As he explained measurements and video results, I paid attention.

Once I had the Venge setup done, I transferred that setup to the Trek, the best I could….  Then I changed the setup on the Venge, changing the stack of spacers from below the stem to the top of the stem: 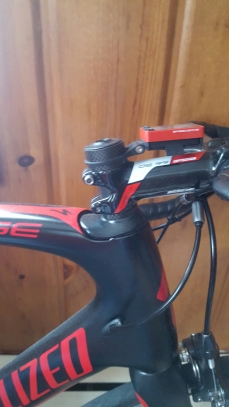 Once I was comfortable with where the bar was and knew I couldn’t go any lower, I had the fork cut so I could lose the spacers stacked on top of the stem.

The 5200 was an entirely different case when it came to the stem, and dropping it.  The 1999 5200 came with a quill stem – much easier to adjust, but a lot less versatile.  Switching bars and changing the stem length were both major ordeals.  It was so bad I finally opted for the strait quill stem adapter so I could put a newer stem and standard drop bar on the bike.  While it was a pain, to get through, once I finally decided on a course of action, everything worked out:

Finally, and this is where all of this comes together, I’ve always wanted my bikes to look good, to be cool.  This has been an ongoing experiment until just recently with the Trek and last year for the Specialized.  I haven’t picked up a new part for the Venge since that red bottle cage last year.  The Trek has required some parts, on the other hand.  The headset was completely worn out, so that was changed when I had the bike painted.  The shifters were replaced and so were the wheels.  She’s right as rain now, though.

The biggest mistakes I made in setting my bikes up, there were two, had to do with settling for parts that I knew wouldn’t work (poorly matching bottle cages cost me a small fortune) or parts that simply didn’t fit (a 60mm stem for the 5200 comes to mind – I thought it made sense when I bought it but it was too short).  The second, and hardest to stomach, was not having a coherent strategy for a color scheme on the Trek.  I originally was stuck on red white and blue but that never worked with the shade of red the bike was (candy apple red over gold flake – my wife like to call it “burnt orange”).  I pigheadedly stuck with that color scheme until I finally decided to “follow the rules” of decorum when it came to cages, bar tape and saddle….  I kept the white cages but everything else went black and the bike looked better for it: 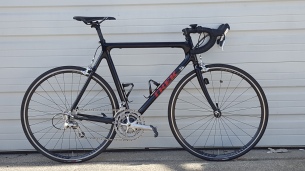 While many bemoan “The Rules” as described by Velominati as overbearing, I’m hear to tell you, it pays to follow them if you have any hope of looking good as a cyclist.  Nobody, not one person I ride with, gave me a hard time about my bike or the colors I chose (just my wife, and that was mostly good-natured fun).

It wasn’t until I had the benefit of hindsight that I wished I’d heeded The Rules.

In the end, what’s most important is that I am a happy cyclist.  That’s what gets me out on the road, day after day, so I can be healthy and bright-eyed.  If my bike fits poorly and looks ugly, there’s a greater chance I’ll leave it in the garage to polish the leather on my couch with my butt.  If I feel and look good, there’s no stopping me…  And that’s how I did it with two very different bikes.

Oh, and for those new to my blog, if you think the red and black is taken a little too far….