Home » Cycling » All Waxed Up and LOTS of Places to Go!  What I had to do to my old school bike to make it road trip worthy…. Once again.

All Waxed Up and LOTS of Places to Go!  What I had to do to my old school bike to make it road trip worthy…. Once again.

Zoom in, I’ll give you a second……  That’s right, shiny baby.  That’s beside the point though.  Lots of places to go, that’s the main point.  Yes.

It used to be, not long ago, I would loath riding the 5200.  My biggest problem, of course, is that I bought a high-end race bike… fourteen years newer than my once trusty Trek.  I used to wonder how Lance could have won a Tour de France on it compared to my Venge.

Then the rear rim blew out so I had to put new wheels on it.  Then I decided the seat post had to go so I could get something more adjustable (see below).  Then I found out the headset was shot…. and I mean shot.  Chris King to the rescue (heavy, but stupid smooth).  Finally, the bottom bracket bearings had to be tended to.  Oh, and new shifters/brake levers too.  I almost forgot.  And a different saddle!  The original 155mm Trek saddle had my hamstrings barking like junkyard dogs.

With all of that done, that 18 year-old bike rides like new.  Or at least close to new.

The headset being shot was the biggest problem.  The bike’s steering was never quite right and I would develop a speed shimmy above 45 mph.  Today I can blow right by 45 without worrying.

While writing this post I’d almost forgotten the original saddle on the 5200, the original 155mm behemoth had me in serious pain when I started ratcheting up the mileage on it.  I actually had to take time off the bike, though I thought the problem was running related initially (and wrote about it here).  I need a 138-145mm saddle. 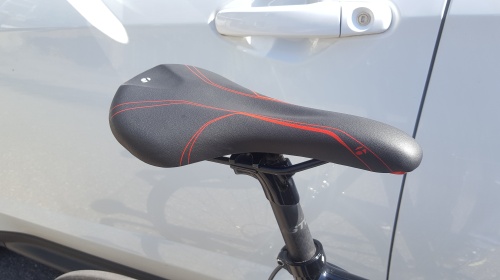 The shifters were the next in order of importance, and thank God for MicroSHIFT.  $75 for 9 speed shifters that work perfectly, are three times less than Shimano Sora 9 sp., and they don’t have those silly gear indicators.  The old shifters had been dying for s couple of years and the right shifter finally went the way of the Dodo.  The right simply wouldn’t shift anymore.  The new MicroSHIFT shifters were a vast improvement over the worn out Shimano Ultegra shifters and didn’t break the bank. 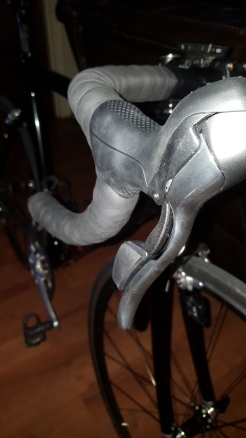 The next big piece of the puzzle were the wheels.  The ’99 5200 came with what became known as a “bomb proof” Rolf Vector Comp and was excellent at holding its true with a minimal number of spokes.  Unfortunately, and no fault of the wheels or Rolf, the sidewalls became thin after years of heavy use and braking.  The rear rim blew out at the brake track.  I put the wheels that came on my race bike on the Trek.  They’re heavy, but have held up well under hard miles in poor conditions.

Getting into the smaller items, I replaced the seat post because I didn’t like how it adjusted nose up and down.  Level was between clicks, that’d be the simplest way to put it.  I wanted something that I could adjust the saddle exactly to where I wanted it.

Then there was the maintenance on the bottom bracket bearings.  This was just simple maintenance:  Clean out the sealed bearings, clean and lube the housings, repack the bearings.  Years of rough riding and winters on the trainer had taken their toll.  This was done when the headset was replaced and frame painted:

All told, I probably have about as much into that bike as if I had purchased it new.  I paid $750 for it when it was 14 or 15 years-old and I actually took the time to detail what I put into the bike since:

Add to that photo the $75 shifters and $50 for another saddle, and that’ll get you there.

And this is the finished product again: 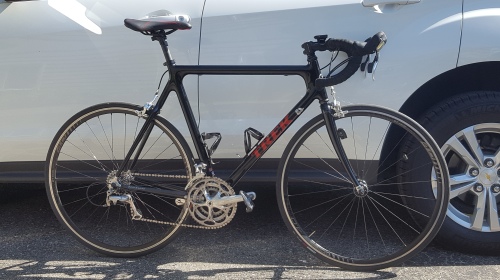 After all of that, the bike went from okay to superb.  I went from riding it only so I could keep my nice bike from the rain, to preferring it under certain circumstances.

To be clear, my Specialized Venge is a vastly superior bicycle.  It’s faster, lighter, and more comfortable on rougher pavement.  On the other hand, with some of those upgrades, the Trek closed the gap…. and even though it’s about four pounds heavier, it’s a better climbing bike.  You’ve gotta love a 30 tooth chain ring on a 20% grade, that’s all I have to say.

The significance here is in all that had to be done to make that used bike right.  Parts wear out and break, it’s the curse of riding lightweight products, they wear out and it’s not always as easy as a shifter not shifting anymore to know that something serious is wrong.  My bad headset is a perfect example.  That headset was gone when I bought the bike but it got a lot worse over the next two years I owned it.  I finally figured it out just before I had the frame painted.  I could feel play in the fork started under heavy front breaking.  When I tried to tighten everything up, the steering bound up.  Before sinking all of that money into the bike, I thought it was about done – and that’ll show you how wrong I was.  With some new parts, that old school Trek just started its second life.

Like Loading...
By bgddyjim in Cycling, Fitness on July 13, 2017.
← There’s a Difference between Hoping and Knowing when it comes to Your Ticker… A Record-ish Week on the Bike is a Mix of Fitness, Laughter, Good Times and Noodle Salad, Baby. →