Home » Cycling » Leaving it all on the Road

Leaving it all on the Road

I rolled out with my wife and friends at 8:02 yesterday morning.  Why the 02?  Winston texted me at 7:56 that he was running late.  Punctuality is not his strong suit.  He pulls like a tiny Clydesdale though, so what’s two minutes between friends, eh?  Nothing. 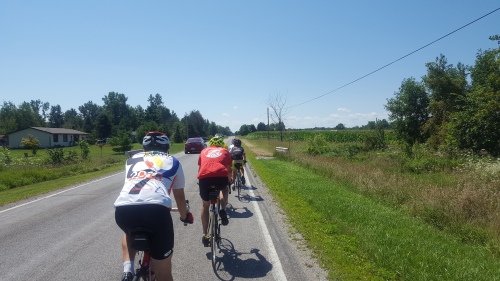 At some point, around 20 miles in, the guy at the front missed pointing out a hole in the asphalt.  It was hard to see, as the road had simply sunk in a 6″ round hole so there was barely a shadow.  I missed it but several behind me didn’t.  Lynn didn’t.  He was taking a swig one handed when he hit it.  He lost control and endo’d down a 10-15′ deep ditch.  It was something out of a TdF crash video.

Amazingly, he was okay.  A little scratched up and his bike was going to need new bar tape and his shifter lever straightened, but he was back and riding after we formed a human chain to pull him out of the ditch.  Seriously.

We sorted him out and once we were certain he was okay, we rolled on.

From that point, there were a few issues that popped up.  One of the guys was struggling to keep up so Winston and I dropped back to bring him back to the group.  Chuck’s rear wheel decided to start rubbing his frame so he dropped out of the group to wait for a ride to pick him up (he ended up letting a little air pressure out of the tire and that gave him enough clearance to finish but he was out there for 45 miles on his own – talk about gutting it out…), and Lynn’s adrenaline from the accident finally wore off and he slowed down and dropped off the back.

In the end, we all finished and my buddy Mike took the sprint at 99.5 miles.  I took the final pull, starting at 95 miles, and kept it between 21 and 22 mph until we hit 98-1/2.  The idea at that point was to ramp it up to see if I could drop everyone else and cruise over the line alone.  I was so close too.  I dropped everybody but Mike and Brad – they managed to stay on like dug-in ticks…  I came over a little rise at 25 and accelerated to 28 heading back down what could barely be called a hill.  Brad ran out of gas but Mike got me by a half a bike length.  Unfortunately my strategy was a little lacking.  I didn’t have anything left – no more gears left in me to answer him.

In the last ten miles I’d pulled all but three of them.

There once was a time, not too long ago actually, when an 18.9 mph 100 miles would have been a bummer.  I was always shooting for that 20 mph average.  Those days are long gone.  Nowadays it’s more about spending time with my friends and building memories to laugh about as I get older.  If I feel I need to work a little harder, all I have to do is stay up front.

Lynn and Chuck left a lot more on the road yesterday than I did (I still feel a little selfish for not waiting for Chuck and letting the rest of the group go).  It was still a heck of a lot of fun and I left enough out there for government work.