Home » Cycling » Fitness and Fun; Desire and Dedication.  And a Side of Happy.  Bikes are the Answer to All of Your Fitness Needs….  If done Correctly.

Fitness and Fun; Desire and Dedication.  And a Side of Happy.  Bikes are the Answer to All of Your Fitness Needs….  If done Correctly.

My friends showed up Saturday morning and we rolled out, after Gary and I tinkered with his front derailleur to get it to stop dropping the chain into the bottom bracket when he was in the three easiest gears on the cassette….  Fortunately, I have a good set of cycling tools I carry in a duffle bag.

We all know riding with friends always beats riding alone.  Maybe we don’t….  It does, trust me.  From safety in numbers to laughs and good conversation, there’s nothing better. 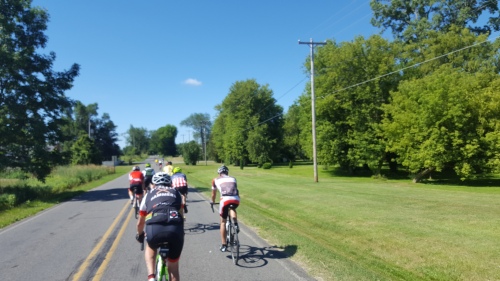 We had some real wind to contend with for the first time in at least a month so having a draft to rely on was awesome.  That said, the 2 hours 35 minutes went by pretty fast.

Sunday morning was more of the same, but we chose a different route, better for those light breeze days because it’s straight west, a little south, then a lot of west.  We had eight so a perfect double pace line.

I was feeling surprisingly strong, considering I’d helped a friend of mine hang some drywall after riding on Saturday and I figured I wouldn’t be worth much.  I helped bring the group back together a couple of times and stayed with one of the guys who had to deal with a flat so I could help him back, too.

Quite often it’s suggested that we ride in a group that has cyclists just a touch faster than we are so we can get faster.  That great to a point, and maybe once during a weekday ride that’s a brilliant idea.

On the weekends, though, might I suggest riding in a group of people who are your equal.  Not only can you enjoy some excellent conversation and laughter, if someone drops you’ll be able to help them back.  Not much feels better than helping a compadre back to the group.  Well, at least not much that can be done with clothes on.

But that’s a story for a different blog.

Cycling opens up a whole world of awesome when it comes to fitness, but when done correctly with a club, the fitness is more a side-affect.

Like Loading...
By bgddyjim in Cycling, Fitness, Humor, Mountain Biking, Recovery, Triathlon on August 27, 2017.
← A Revolutionary Way of Looking at Recovery from Addiction Decisions, Decisions…  Picking the Proper Bike for the Ride and a Bonus Creak in the Unlikeliest of Places →