Home » Cycling » A Good Bike Starts with Good Wheels; A Lesson I Learned Over 40,000 Miles

A Good Bike Starts with Good Wheels; A Lesson I Learned Over 40,000 Miles

I’ve ridden three road bikes over 40,000 miles since I started riding just six years ago.  I’ve ridden on super-cheap all the way up to decent wheels, but limited to aluminum only.  I’ve had “bomb-proof” Rolf Vector Comp’s, Specialized El-cheapo DT Axis 4.0’s (I despise these wheels), a set of hybrid Vuelta Corsa SLR/Velocity wheels I had built after the Vuelta’s ran into big problems due to lightweight rims, and a set of old-school cheap wheels that came with my ’91 Cannondale SR-400.

That said, the Vuelta/Velocity wheels are vastly faster and more enjoyable to ride.  The differences come down to the hubs (and I’ll be replacing the hubs on the DT’s as soon as disposable income allows).  The Vuelta hubs are closed bearings while the DT Swiss hub internals are the old-school cone race, loose bearing type.  The Axis 4.0’s simply don’t roll as well…. and they’re impossible to get all of the play out of the rear hub without making the bearings too tight to roll. 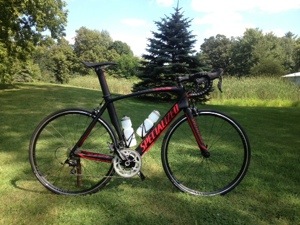 A while back, a blogger/racer I hold in high regard wrote a list of important features to look for when purchasing a bike, I believe it was a top ten.  At the top was a good frame.  Wheels were all the way at the bottom of the list, least important.

I don’t own a poor frame, but I do own a decent frame and a top notch frame.  I also don’t race, so I assumed he knew better than I about the order of importance of the two.

I respect his opinion, but as far as enthusiastic road cycling goes (lots of miles, very fast), In my experience, good wheels trump a good frame.

The Trek, with the cheap wheels, is a ho-hum ride.  It’s acceptable, but not noteworthy, and slower.  Put the upgrade wheels on that bike and it’s transformed from a decent ride to a great ride.

Follow that to its logical conclusion and put the cheap wheels on the Venge and they take the Venge from a rocket ship to an “above average” frame at best.

Having considered this over the last week-ish, with the proper set-up, a good set of wheels can improve a frame’s characteristics.  Having my druthers, I would take a decent set of wheels over a great frame, any day of the week and twice on Sunday.

Like Loading...
By bgddyjim in Cycling, Fitness, Mountain Biking, Triathlon on August 29, 2017.
← Those who have missed Led Zeppelin as much as I have… Some Days are Meant for the Couch….  Or Dialing in My Wife’s Bike, THEN the Couch. →