The One Road Bike that can Do Everything….

When I got into road cycling, there were a few types of road bikes.  You had your road race bikes and your cyclocross bikes (though they weren’t all that popular yet).  The squishy/endurance bikes were just starting to gain a little traction as well…

Oh, if they had gravel bikes when I started cycling!

I won’t even mess with the suspense.  If you’re looking for a go anywhere, do anything road bike, you want a modern gravel bike (or maybe a cyclocross bike, though I prefer the gravel bike for the normal bottom bracket height).

If you can feel a pound when riding, and believe me you can, seven is beyond noticeable, and tap-dancing “in your face”.

In my case, I’ve already got two decent race bikes and I was buying two gravel bikes (one for my wife, too)…  I simply didn’t have to go big on the gravel bike.  For someone looking to a gravel bike to be their only road bike, you would want to go mid-grade, or even upper echelon.  If it were me, I’d go with something like the Diverge Comp model ($3,000 – carbon frame, 11 speed 105 drivetrain, 48/32 crankset, hydraulic brakes, etc.).

The Expert (one step up) has an x1 drive with only one chain ring (up front) so I would advise against using one as a “do anything” road bike, because you can’t keep up with a fast group, especially a surge or sprint in a fast group, with a 42 tooth chain ring (max speed is approximately 27 mph).  I should note, I have a nasty disdain for the x1 drivetrain on road bikes in club settings.  One of the toughest aspects of cycling in a fast group is picking the right gear for the pace.  With the x1 drives you’re limited to 11 (or supposedly 12 in the near future) gears in the cassette and you need some climbing gears thrown in there too, so call it an 11-32 cassette.  There are a lot of 2 and 3 tooth jumps in the cassette gears, especially when you get down to the 11-15 tooth cogs, big jumps make it tough to match the pace of the group – you’ll often find yourself in between gears, which means you’ll have to push too hard a gear to keep up.  I would recommend a “do anything” bike, not a “do some stuff” bike.

Sadly, we’re not done yet…  While you could use tires that are okay for the dirt and the paved road, I would opt for two sets of wheels with different tires for dirt and pavement.  While you could change tires every time you change riding surfaces, that’ll get old in a hurry.  The dirt wheels will generally, unless you get the high-end gravel bike, be the wheels that come on the bike.  You get an upgrade set of carbon wheels for the road wheels and put the proper cassette on the road wheels, and all you have to do to switch surfaces is change your wheels.  That’ll take about one minute.

What I like about gravel bikes is that they can do anything a race bike, rain bike, or dirt bike can do, as long as they’re fitted with the proper tires.  You don’t miss a thing.  With other bikes, there’s always a big sacrifice.  Take a hybrid as an example.  Halfway between a road bike and a mountain bike, yet it does neither well.  No bueno. 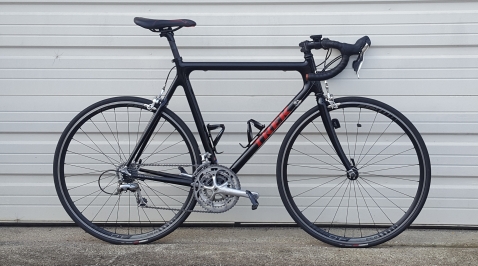