Home » Humor » Letting My Inner Star Wars Geek Out with My Daughter: A Simple Dream Realized

Letting My Inner Star Wars Geek Out with My Daughter: A Simple Dream Realized 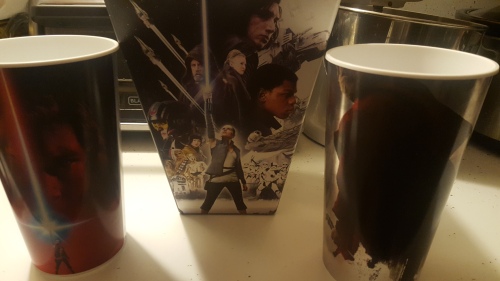 My fourteen year-old daughter and I wanted to see the new Star Wars movie in 3-D.  My youngest daughter hates 3-D Movies because she suffers from motion sickness trying to sit through them.  I, on the other hand, do not.  My eldest suffers, to a lesser degree, but she weathers the storm because the new 3-D technology can make a great movie simply amazing.  We saw The Last Jedi a couple of days after it opened, last week, in I-Max 2-D as a family but my daughter and I cemented plans to revisit the theater together, after Christmas, to catch the movie in all of its 3-D glory…. and thus, a small dream of mine was realized.

My wife’s cousin had a fantastic relationship with his daughter, well into her teenage years.  I know what a feat this is, but I set that as a goal while my eldest daughter was just three or four years-old.  I wanted to be a good enough dad that my kid and I would still have a good relationship into her teens.  I knew this would leave a lot to chance, in my daughter’s choices, so I didn’t hang too much on the outcome – I would simply concentrate on my part and let the chips fall.

So without getting too mushy about it, my kid and I had a better time than I could have hoped for.  It was a perfect night of laughing, popcorn, Star Wars, and entirely geeking out.  I won’t claim to have crossed a finish line, because we all know there are no finish lines, but last night was definitely a small dream realized.

And yes, she knows how special the night was to me because I told her.

Like Loading...
By bgddyjim in Humor, Recovery on December 27, 2017.
← Another Way of Looking at Cheat Days and the Ruination they Lead to – from the Perspective of an Ex-drunk. Fit Recovery’s Idea of a Week Off the Bike →