Home » Cycling » Road Bikes: How to Slam Your Stem when there’s no more Slam Left…

Road Bikes: How to Slam Your Stem when there’s no more Slam Left…

Often, the bike we own limits our ability to modify it to fit.  In my case, my Trek is a 58cm standard frame.  It is the exact size for my height.  If I’d bought a 56cm, there would be a little more room in the cockpit for adjustment, but then the back half measurements are a little bit more finicky.  Today’s modern compact frames allow for a little more adjustability in that respect…

I wrote, last week, about a change I decided to make to the Trek, where I went from a 10° stem (flipped) to a 17° stem (flipped as well), both were 90mm***.  I did this to make the rain bike (or winter bike as they’re called in the UK – there’s no such thing as a road bike for the winter up in the northern Midwest of the U.S.A. – we have to use fat bikes for winter with the amount of snow we get). Point is, there are no spacers that aren’t necessary to the function of the bike below the stem – I’ve run out of spacers, so the only thing left to lower the handlebar was to go with a more aggressive stem. We’re seeing a lot more of this in the pro ranks as well, though they go a lot farther than I ever would. Where I’m at now, I’m maxed out as my flexibility goes.

Let’s do a before and after – some things to look for: The angle of the handlebar – I was able to rotate the bar forward so the bottom of the drops were parallel with the ground, and that changed how my weight was handled at the front of the bike. Because the hoods are now parallel to the ground, my weight is better centered on the bike rather than the hoods pulling me forward to the front of the bike. 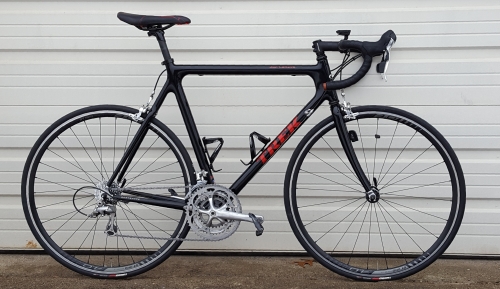 Now, it’s easy to get lost in the little details, especially as the bottom of the brake levers look to be quite close to the same level in both photos… This is because I could rotate the bar up a little bit. Look at the bottom of the drops, though. In the top photo they’re clearly above the closest line. In the bottom photo they clearly split that same line in the garage door. In other words, I’ve got a couple of centimeters more drop in the handlebar by switching to the 17° stem. The bike also looks slammin’ with the new stem on there. I have to do something with the computer mount as that clearly won’t do, but that notwithstanding, the bike is much more comfortable to ride.

So, if you run out of spacers and you would like a little more drop, go with a more aggressive stem… I’m vastly happier for having finally done it. Best I can tell, because I never bothered to measure anything, I ended up with about 1″ of drop, swapping out the stems, or about 2.7 cm. Give or take.

Finally, I have one little, exceptionally important tip;  You don’t have to go it alone on this change if you don’t know exactly what you want. Ask if you can borrow a used stem in the length and rise you want at your local shop to try.  Being the cycling geek I am, I knew exactly what I wanted. If you don’t, your local shop will work with you. Just know this: If you bum a stem from the local shop, only to turn around and order what you want online, you are, in cycling parlance, what is called a twatwaffle. If we were to use non-cycling parlance, we would say snake shit is higher than you. Actually, check that, monkeys fling you… Get it?

If you’re going to buy on the net, at least do the honorable thing and order what you think you want and try it. If you don’t like what you got, send it back and try another size/rise.

***My old flipped 10° stem and the new flipped 17° were both 90mm. The 17° stem increases the reach by more than a few millimeters when you flip it (it decreases the reach when you use it right-side-up. Be careful here, especially if you’re going from a 6° to a 17… The difference in reach can be significant and you might need a shorter stem to keep your cockpit reach comfortable.

Like Loading...
By bgddyjim in Cycling, Fitness, Gravel Biking, Humor, Mountain Biking, Triathlon on February 20, 2018.
← First Two-a-Day of 2018 – Unorthodox Absolutely, but Two Indeed… The Biggest Hurdle to Clear in Continuous Recovery isn’t the Drink or Drug… →