Sobriety, Happiness and Peace is All About What We Do with the Other Twenty-Three Hours in a Day

When it comes to my posts about recovery, I tend to pick hard hitting topics and drive emotion into them.  Recovering from addiction is a big deal in some aspects, but in others, it’s mostly just a day to day, easy does it.

When I first sobered up, the whole idea was pretty simple for the first year; don’t f*ckin’ drink.  I went to a lot of meetings to make sure I would make it.  The first half of the year I hit a meeting every day – sometimes two.

Many people who fail with recovery, have a tough time grasping that true freedom from addiction isn’t realized until the other twenty-three hours of the day are dealt with successfully.

Anyone can stay clean and sober in an in-patient rehab facility.  It’s what happens when we step outside that causes us trouble.

I’ve gotten to the point in recovery where I don’t worry much about alcohol and drugs anymore.  My natural reaction to being anywhere near them is to recoil – to think things through.  When I wake up in the morning, after thanking God for another day on the right side of the grass, I think about what I can do better today.  I think about where I might have fallen short yesterday, and what I need to do to be a better me.

This is the best way I know to start a day.  Focused on how I can be a better version of me.  This is how I do good with the other twenty-three hours of the day.

I was about twelve seconds away from choosing sports cars as my hobby.  I’ve got an ’86 Mazda RX-7 GXL in the garage that my aunt gave to me for doing some work on her house to get it ready to sell a few years before she died.  It needs considerable work done to it and now that I’m into cycling I don’t have the time, disposable cash, or “want to” to bother with it.  Had I stuck with running, this post would be very different.

With that history out of the way, I hadn’t planned on getting into bike refurbishing when I started the sport.  I was simply happy to get outside and turn the pedals.  Oh, and I had no idea what went into maintaining bikes, let alone building or restoring them from the ground up but the owner of our local bike shop set me free one day.  He told me to go ahead and tinker with my bikes.  He ended with, “You can’t break it bad enough that we can’t fix it.”

Years later, someone knocked my Trek off the rack at a supported ride in Flint.  The top tube was gouged and a glob of baby blue paint from the rack was transferred to my frame.  It broke my heart.  The bike was a mess, so I decided to remake it the way I wanted it. 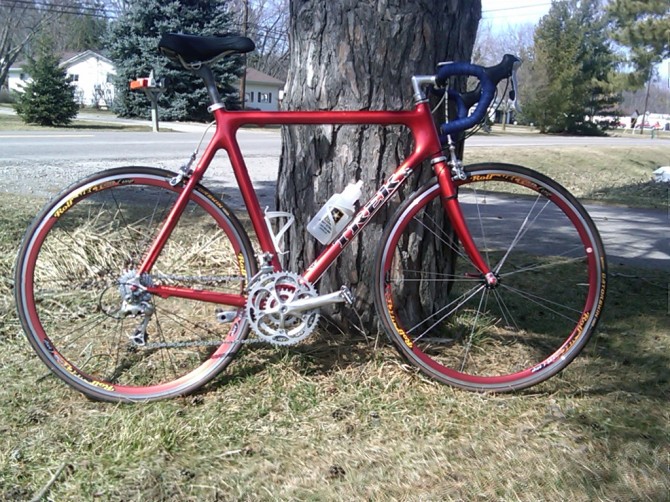 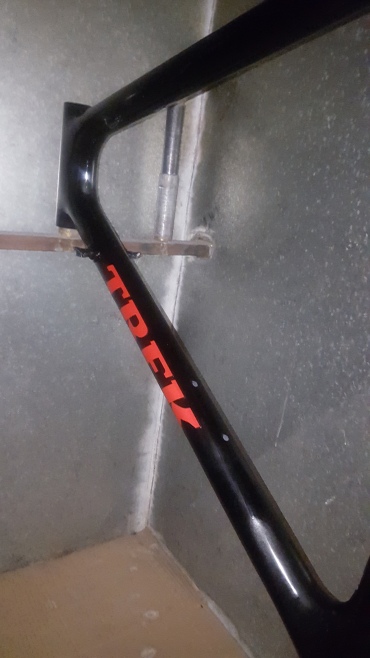 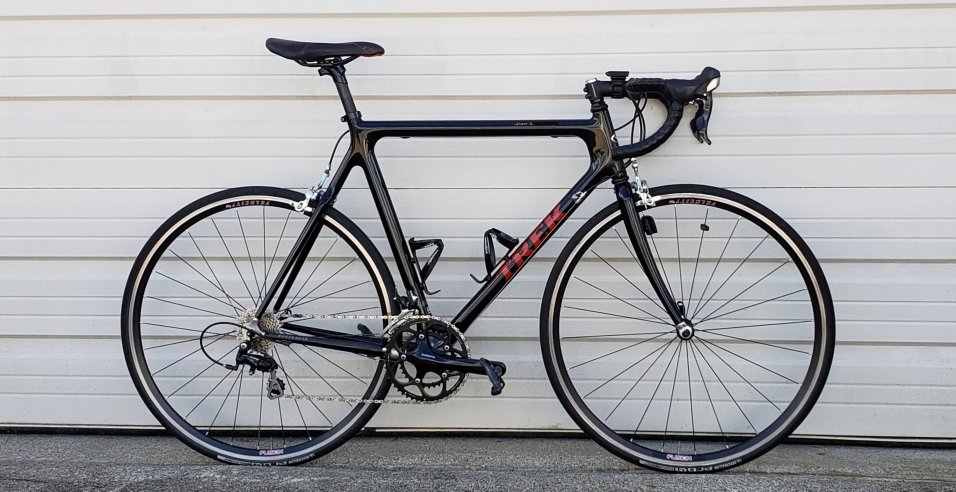 My trusty, old Trek went from decently cool to undeniably spectacular in the space of a couple of six months – and I managed to drop a couple of pounds off of it in the process.

Just like customizing a car (only with fewer moving parts), breathing new life into a classic bike is a labor of love.  Though unlike a car, a complete transformation will be (fairly) reasonable on the finances.  At least relatively speaking.

Once I got going, I went all in.  In addition to the paint job, the bike got better, lighter wheels, a lighter double crankset in lieu of a heavy, inefficient triple, a ten speed drivetrain in lieu of a nine speed, a new seat post, a new flipped 17° in lieu of a flipped 12° stem, a new headset, and a new bottom bracket, and real leather bar tape (the cat’s pajamas).  The bike started out with a lot of brushed aluminum parts but I changed everything over to black, right down to the seat post collar.  I did leave the brakes alone, for now, mainly to keep something on the bike original other than the frame, fork and chainring bolts.  That’ll change this year, though.  Those brakes are going to be black as well, and shortly.

Thankfully, that ’99 Trek frame is just new enough that modern components work on the frame.  Some things I had to account for – and having friends at the local bike shop helped immensely, because I’d have been lost without them – the distance between the rear chainstay dropouts (130mm for 10sp. 131 for 11sp. and the extra millimeter doesn’t matter, I’ve got 11sp. wheels on the race bike with a 10sp. drivetrain and a spacer on the cassette), the seat post diameter, handlebar diameter, the handlebar width, the seat post collar diameter, put simply, if you’re going to bolt a part onto a bike, the measurements matter.  Watch the details, too; most people won’t go to the length of actually ordering a new seat post collar in black, but it made a big difference to my eyes.  The Trek has a quill stem, unlike the newer threadless stems.  I opted for a quill post with a newer stem rather than trying to find a proper black one-piece quill stem (they are out there, I just thought it would be simpler to go with the newer threadless stems – more options available).  Swapping the 9sp. triple drivetrain for a 10sp. compact double was a snap.  I needed a new Ultegra English threaded bottom bracket ($38 installed) and a new crankset ($20 – used, bought from a mechanic at the shop who had an extra from a new bike that he’d upgraded), and new chainrings ($60).  Much to my surprise, once the old bottom bracket was taken out, the new went in as easy as could be hoped, even though the bottom bracket designs were completely different:

It cannot be stated strongly enough how much better the new crank and bottom bracket setup is contrasted to the old.  The old required constant cleaning and maintenance.  The new has been, up to this point, set and forget.  I’ve taken the assembly apart a few times to make sure everything was clean but it wasn’t necessary.  The old would get a little creaky now and again (usually dirt working its way to the bearings) but the new hasn’t creaked once – it’s been incredibly quiet.

After all of the work and money that went into the transformation, I can say without question, the bike I’ve got today is vastly superior to what it was just a few years ago.  Vastly….

… and it was worth every penny.  The Trek went from my “ride four times a season as a rain bike” to my go-to tour bike.

To wrap this post up, there’s one thing that has to be addressed early on in the project.  Are you going to go retro and keep the bike original or are you going to go modern?  I chose to modernize the bike.  A cleaned up front end with newer shifters meant the cable housings travel under the bar tape.  Changing the drivetrain from triple to double improved the efficiency in shifting and dropped some decent weight.  The seat post went from alloy to carbon fiber, but the big change was made to improve my ability to adjust the seat angle (the old seat post had notches so the seat nose was too high on one notch and too low on the next).  There will be work in either option – whether finding new components that match up with your old frame, or finding vintage parts.  Either option presents its challenges.

In my case, I was interested in functionality.  I wanted the bike to not only look smashing, I wanted it to meet specific operating criteria.  I wanted a bike that was easy on the eyes and superior in its operation.  That meant newer components – there never was a question for me.  It took a while to make it what I wanted, but I’m glad I went to the trouble.