Home » Cycling » The Noob’s Guide to Cycling; The Specifics of Dialing a Saddle In by Feel (Rather than Numbers).

The Noob’s Guide to Cycling; The Specifics of Dialing a Saddle In by Feel (Rather than Numbers).

Numbers, contrary to popular mathematical belief, can lie when it comes to cycling and saddle position.  Numbers are a great start, but sooner or later you’re going to want to go by feel…  And I’ve never subscribed to the notion of “level it and forget it”.

When you’ve got some padding on a saddle, you have a little room for error in the setup when you’re riding 30-40 miles. 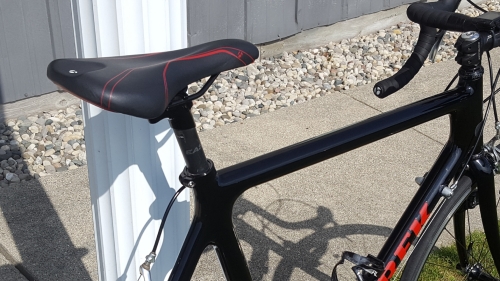 Take away most of that padding and jump that mileage up by double or even triple, you better have that saddle right or you’ll be hating life. And your bike. And your shorts. And your saddle. 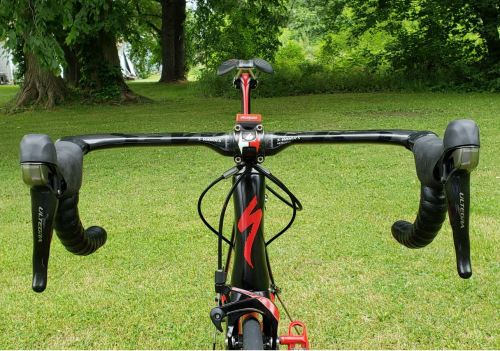 Now, keep the mileage up and cut the padding in half again. One look at that saddle and you wonder if two pairs of shorts would work… 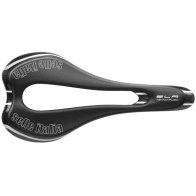 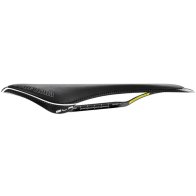 No two saddles are alike… unless they really are alike. Erm… I’ve got two Specialized Romin saddles, one on the Venge and one on the tandem. I set them both by numbers, then feel.  By chance, I had them set side by side one day in the bike room. A simple glance and I noticed they’re on exactly the same plane.  I set the saddles next to each other and stepped back for a closer look; same plane. 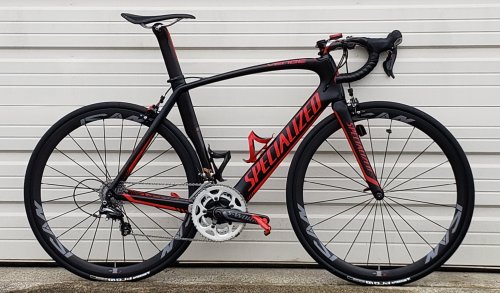 Over a hundred miles (or 50 on the tandem), the heinie don’t lie.

So, I thought I might take a moment to share with you, my friends, my unscientific method for dialing in a new saddle.

First, as the process goes, the less padding, the better – you get a lot more feedback.

I like to start on a trainer with a new saddle. I’ll be in the saddle most, if not all, of the time so it helps to feel what’s going on. For the new Selle, I matched the tilt from the old saddle after setting the fore/aft. Then I set the height (36-3/8″, to be exact). Then I climbed on with the intention of giving it 45 minutes.

I lasted five. Maybe. I could feel my hips rocking a little bit. Hips rocking means the saddle is too high. I don’t know how that was possible, though. 36-3/8″ should have been dead nu… Um, phrasing. I lowered it a millimeter.  The saddle could be a little farther back than the old saddle was, that would require the saddle to be a shade lower…

Another five minutes. I lowered it again. Just a millimeter. Another 20 minutes.

I could feel pressure from the nose of the saddle that kept me from wanting to ride in the drops. It wasn’t outrageously uncomfortable, just a little nag. I lowered the nose a quarter-turn on the front bolt.

And there the saddle stayed for more than a week.  I thought I was done.  The saddle felt okay, about as good as you’d expect from just one millimeter of padding (not much).

I’ve worn, over the last week, every pair of heavily padded bibs I own and took a few spins on medium padded bibs to make sure the saddle is where I want to it be.  Last night, I’m about ten minutes into my ride and something just wasn’t right.  The fore/aft position of the saddle was perfect, I’d already lowered the saddle a couple of millimeters so that wasn’t it… I could simply sense something was a little off, a little pressure where there shouldn’t be pressure in front of the sit bones.  This calls for a systematic “shotgun” approach.  I had a sneaky suspicion I just needed to lower the nose a pinch…  I backed out the rear mounting bolt an eighth of a turn and tightened the front bolt the same amount and climbed aboard.

And the angels sang.

Once the pressure was off… um, a very delicate area that doesn’t much like pressure, and the saddle felt like a $400+ saddle should feel like.  It’s still stiff, but I wasn’t thinking much about where my butt was on the saddle as I finished my ride, either.

This is why I love breaking a new saddle in on the trainer.  Outdoors there are too many distractions and variables.  Bumps, rough pavement, in the saddle, out of the saddle… up a hill, down a hill.  Accelerate, decelerate, headwind, tailwind, crosswind, traffic, pedestrians…  On a trainer, it’s just my butt and that saddle for 45 minutes.  I get a lot of good feedback when all I have to distract me is a movie I’ve already seen five times.

And that’s about the done of that.  I think.  Maybe.

By bgddyjim in Cycling, Fitness, Gravel Biking, Humor, Mountain Biking, Triathlon on February 20, 2019.
← Two Weeks Till Spring… It’s Time to Hit It Hard. I Am Going to Have to Rethink that “Two Weeks Left till We’re Outside”, Thing… →