Home » Cycling » The Humble Bumble Gravel Bike: What You Do and Don’t Need in Your Gravel Bike to Be Able to Love It

The Humble Bumble Gravel Bike: What You Do and Don’t Need in Your Gravel Bike to Be Able to Love It

Ah, the humble gravel bike.  Well, some aren’t so humble.  I’ve got a friend who rides a Pinarello Grevil eTap and he’s got more into that than I do into both my race and rain road bikes.  My gravel bike is humble, though.  My 24 pound Specialized Diverge A1:

A lot of roadies in the US are turning to dirt roads in the off-season to escape traffic.  For those getting into the dirt, one might wonder just how much bike is necessary to enjoy dirt road cycling.  In my experience, the answer is encouraging; not much.

The modesty of my bike room aside, $5,000 separates those two bikes… and just shy of nine pounds. My gravel bike (front) isn’t much in the “you paid what for that thing?!” department, but there’s no question it’s an enjoyable ride.

I have a few friends who have almost as much into their gravel bikes as they do in their road bikes. I simply wouldn’t afford that – sitting just outside the frame is my wife’s gravel bike. Everything is in twos, now, so things get pricey in a hurry.  For the gravel bikes, we had to be less… flashy.

Gravel season, for a roadie, is a fantastic time of year.  For many, especially in the farther north (and south) reaches of the globe, everything slows down for a couple of months as we enjoy just being outside before the snow flies.  For others, dirt season is just an extension of road season where miles are pounded out and average speed matters.  The trick is to figure out which is you.  Some stick to mountain bikes only – but we roadies need the speed.  Even when we’re puttering about on the back roads on a mountain bike, we’ve got this nagging sucker  in the back of the melon committee with his hand raised, jumping up and down shouting, “you’d be a lot faster on a road bike, knucklehead”.  Eventually, that jerk can’t be drowned out anymore with happy thoughts of cruising the back roads.  Thus, gravel bikes. 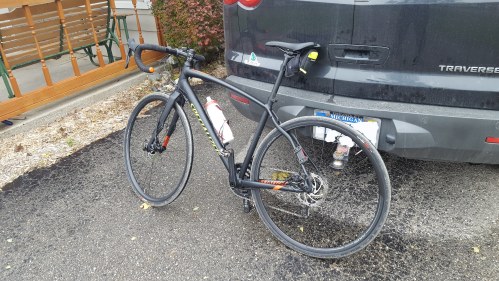 For the easy gravel rider, where I ride, gravel season doesn’t require an expensive, carbon fiber bike.  I prefer something with a Shimano Sora drivetrain as a minimum.  Recent (2017) improvements in the Sora line mean the 105 and Ultegra lines aren’t as necessary as they once were.  Looking at the lesser drivetrain lines, I just don’t like the way the Claris line operates.  We have that on my wife’s gravel bike and I’m going to switch that out first chance I get to slip a few hundred bucks under the radar.  Claris is finicky.  Sora, at least, operates on par with its more expensive, lighter siblings.  The frame is going to be aluminum because with the wider tires (I run 32’s, the widest that’ll fit betwixt the seat stays), I’m not going to have to worry about the ride quality inadequacies of an aluminum frame. 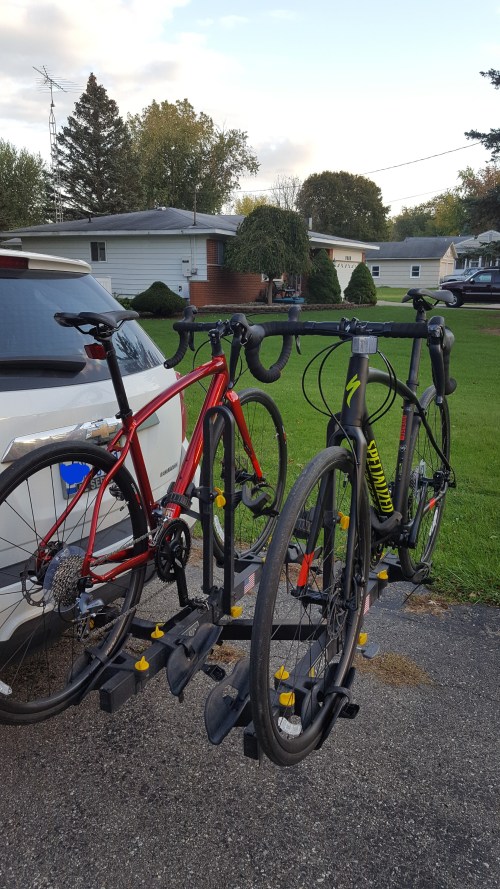 The day the bikes came home from the shop. The lawyer weight was removed shortly thereafter.

Brakes are a big deal.  For a gravel bike, I’d never go with a rim brake – heck, that goes for anything I’m going to be riding in the dirt.  There’s nothing wrong with rim brakes, as long as you’re willing to accept that they get gummed up with dirt and grit which eventually wears down the wheel’s rims.  I’d never buy a rim brake gravel bike with discs out there (heck, if I ever buy another road bike, it’ll have discs on it).

The only question left on the subject of brakes is mechanical or hydraulic?

Hydraulic brakes will come on upgraded drivetrain packages, you’re entry-level bikes come with mechanical brakes.  Hydraulics are vastly, vastly superior to mechanical.  If, however, you’re just going to be using the bike to grind out some post-season miles, mechanical disc brakes are just fine.  I’ve got hydraulic on my mountain bike and mechanical on my gravel bike and I definitely appreciate the hydraulics, but the gravel bike’s brakes do the job.  Brakes only slow you down, anyway, as the saying goes.

Tires are important, too.  I could write a series of posts on the importance of tires.  You’re going to need something that’s got a little give and has some tread while giving you a center strip for when you’re cruising on paved/hard-packed roads.  I’m currently riding 32 mm Michelin ProTek Cross tires (between $20 and $25 each, depending on where you buy them) and I love them.  Gravel tires can get expensive in a hurry and I simply didn’t want to blow between $200 & $300 on tires for the gravel bikes.  The Michelins are fantastic for all dirt needs.  They’re just heavy.

I was, at one time, a bike snob.  Heck, facing facts, I still am, though it’s more accurate to call me a road bike snob.  My Specialized Diverge Sport A1 is proof that even a bike snob can love an entry-level gravel bike – when it’s used properly.  The key here, for me, had to do with managing expectations.  At first, I won’t lie, I was a little bummed at having to bring home an entry-level bike.  What I found, though, once I got the setup and tires right, was surprising; my bike is adequate for how I ride it.  I just have to work harder to keep up, and that’s not a big deal at all when we’re all riding to enjoy the miles anyway.

I’ve found the bike’s setup, how it fits, to be the most important piece of loving my gravel bike.  Once I got the fit right, saddle and cockpit, the tires made up for the aluminum frame and the Shimano Sora groupset is adequate.  Now, if I were interested in riding the bike a bit more competitively, entry-level wouldn’t work.  For what I want out of a gravel bike, the one tick above entry-level gravel bike is easy to love.