How To Rebuild a Bike From the Ground Up: Part Five. The Drivetrain

Sadly, a bicycle’s drivetrain won’t last forever.  Eventually you’ll have to replace parts of, or the entire, drivetrain.  The tricky part is matching up a new drivetrain that’ll work on your old frame.  You’ll have to make sure you pick up the right front derailleur (braze on or clamp on).  You’ll have to make sure you get the right rear derailleur (medium or long cage, clutch or no clutch).  You may even have to decide whether or not you want to stay with a triple crankset or go with a double (I definitely, happily went with the double). 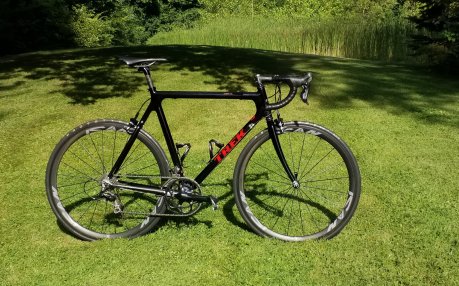 The problem with my old 9-speed Ultegra drivetrain was trying to find replacement parts for it.  The chainrings were in bad shape and didn’t have much life left in them.  They wear out over time, and the set on my Trek were almost 20 years-old when I upgraded the drivetrain.  The bike wasn’t shifting well between the big and middle chainrings so something had to be done.  Unfortunately, decent 9-speed triple chainrings aren’t easy to come by.  I also wore out the right/rear shift lever… one too many shifts.  I made due for a while with aftermarket MicroSHIFT 9 sp. shift levers, but….

I lucked out one day when a friend asked if I wanted to buy his 10-speed Ultegra drivetrain.  He was upgrading to 11-speed.  I jumped at the offer and put the Ultegra on my Specialized and transferred the 10-speed 105 drivetrain from the Specialized to the Trek.

To replace a full drivetrain, you’ll need shifters, a front and rear derailleur – unless you’re staying with the same number of chainrings in the front – in that case, you may be able to keep the front.  You’ll likely need a bottom bracket (they’re pretty reasonable), a chain, and a cassette.  In my case, I’d have changed the front derailleur either way – I wanted the system to match.

Now, as drivetrains go, you’ll have to pick your poison.  You can spend as much as $1,500 for a full Dura-Ace mechanical drivetrain.  You’ll blow a bit more than $500 for Ultegra shifters, derailleurs, a cassette and chain, or a bit more than $630 for the set.  The real bargain is the 105 groupset… you can get a full set for $350-$500.  You’ll give up a little in weight, but the 105 drivetrain is the cat’s pajamas for the price – especially if you’re upgrading an old bike.  In my case, I dropped a considerable amount of weight going from a 1999 Ultegra 9-speed triple to a 105 10-speed double (including a new Ultegra bottom bracket in lieu of the old clunker).  There was enough trickle down that the 15-year newer 105 set was about three-quarters of a pound lighter.

Drivetrains, particularly cranksets, are a little tricky to get right with the 5,000,000,000,000 and change bottom brackets there are (a slight exaggeration).  In my case, the shop just installed a new Ultegra bottom bracket (English threads) and I slid on a standard crankset that I bought off a mechanic friend at the bike shop.  In my case, it was simple as simple gets.

Rebuilding a bike is the perfect time to tailor your drivetrain to your specific desired use for the bike.

My Trek is my rain/tour bike.  If we’ve got rain anywhere in the forecast, I take the Trek.  When we go on multi-day trips, I take the Trek.  In both instances, I’m not as worried about top-end speed as I am about being able to climb any hill I bump into.  For that reason, I opted for the compact 50/34 crankset paired with the 11-28 cassette.  I can climb anything up to 25% on the bike (and probably more, just never tried anything greater than 22%) and I’ve got an escape velocity of 40-ish-mph (the speed at which you can’t pedal any faster to make the bike go faster).  Put simply, the gearing is perfectly suited to how I ride the bike… and with a ten-speed drivetrain, I shouldn’t run into any problems with obsolescence in the next… carry the one… I don’t know, fourteen weeks or so?

The last big thing to discuss here is the crankset, going from a triple to a double.  The triple is a bit on the finicky side to keep tuned.  Everything has to be just right to hit all of the gears without chain rub.  There’s also a lot of overlap between gearing in the three chainrings, which translates to inefficiency.  I wanted to simplify the whole experience so going to a double made all the sense in the world.  Triples are great, don’t get me wrong… on a tandem.

Finally, with a new drivetrain on my 20-year-old Trek, I’ll have trouble-free shifting and cycling for years to come.   That’s exactly what I wanted when I rebuilt the bike.