Home » Cycling » What Every Cyclist Needs to Know About Saddles; It’s Not the Padding, It’s the Contour of the Saddle

What Every Cyclist Needs to Know About Saddles; It’s Not the Padding, It’s the Contour of the Saddle

Cycling in the United States is on the rise.  From what I’ve been reading, we’re talking epic proportions, only this time the word “epic” is actually being used correctly.  This is a good thing, and I’m excited about it.

For those new, or contemplating getting into this most excellent sport, many think they know that the only reason enthusiasts ride around on those tiny saddles is because they don’t weigh much, so they’re willing to put up with the pain over a hundred miles at a time because they’re crazy.  Or something.  The cycling noob is certain that the answer is to just add more padding to make the ride more comfortable.

There’s not one part of that notion that’s correct.  It’s all wrong.

Yes, the saddles enthusiasts ride on are light, but they are anything but painful.  If those vastly over-padded monstrosities were really comfortable, we’d be riding on the lightest, smallest version of them.  Those tiny saddles are actually more comfortable that their bulbous brethren when covering big miles and long hours.

Those are the road saddles I have on my two road bikes.  Two different brands, but almost the exact contour.  The contour matches the rider’s flexibility and desired riding posture on the bike.  Bontrager/Trek has a very nice system for this, and their saddles, while not the lightest, are exceptionally comfortable.

I am a Posture 2 guy.  Not quite a pro posture, because I’m almost 50 for God’s sake, but close enough for government work.

I’m a Specialized guy when I’m not on my Trek, though.  The original saddle that came on my Trek was too wide for my sit bones, so the local bike shop set me up with a Specialized Romin saddle, because they had one in stock and it matched my sit bones (143 mm) and my aggressive riding style.  From that day forward, all saddles I’ve ridden on have been compared to that saddle.  I have one on my Specialized Venge and one on my tandem.  I bought the Bontrager Montrose (above) because it matched the profile of my Romin.

Another company that does a good job of making different saddles for different riders is Fi’zi:k (don’t mind the silly spelling, they’re excellent saddles – I have several friends who swear by them):

I don’t know about their flat and wide for the two more flexible postures, but I don’t ride their saddles so I can’t comment intelligently on their system.  I do have two flat Selle Italia saddles and I can’t ride on either of them, no matter how hard I try to dial them in… and one is the lightest saddle I’ve ever owned.  It’s retail price is $420 and it’s a full carbon fiber model (a friend gave it to me).  Therefore, if there were any truth to the notion that people like me would put up with pain to have a light saddle, guess what?  It’s simply not true.  You can bet I tried, though!

To wrap up the road saddles, comfort is all about fit (location on the bike – up/down/front/back) and contour.  Highly flexible people can handle a flat saddle.  I’m not one.  Also, as you can see in the photos above, I don’t ride on a lot of padding because it’s unnecessary once you know how to dial in the proper location.  For those who don’t know, the people at your local bike shop should be able to help, or check out some of my previous articles on subject on this page. 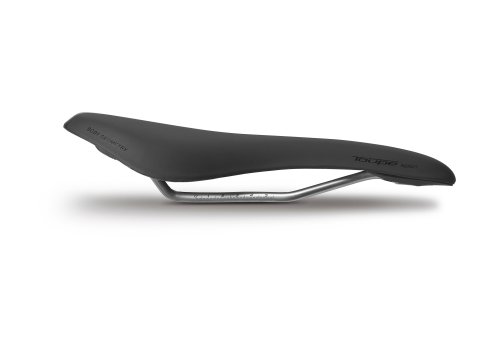 Same contour, a little more padding.  And because I have the bike setup right, that saddle is excellent on all but the nastiest of roads.  Now, part of the comfort of the bike has to do with tire choice, but that’s for another post.

My butt hurts just looking at that photo!  Now, let’s deal with those round, fluffy saddles for just a minute.  There’s no doubt, a big butt will require a bigger saddle, but that big fella above would take a mighty big heinie!  The large saddles tend to restrict blood flow where blood really needs to flow, and that’s why they hurt so much after an extended period in the saddle.  When a bulbous saddle hurts, a new cyclist naturally thinks more padding is necessary, so they go for one of those saddle covers, which cuts off more blood, thus making the ride even less comfortable.  Usually by this time, arms are thrown in the air and the bike starts collecting dust in the garage.  It’s not the bike that’s giving you fits, it’s that big saddle.  Unless you’re content on a cruiser (leisure bike), broom that big saddle and have a fitting performed at your local shop.  A few weeks of decent mileage later and you’re but will start feeling better.

Also, if you’re going to try those tiny saddles that we’re so fond of, click here to learn how to pick your shorts.  You’ll need a few pair of them.

By bgddyjim in Cycling, Fitness, Gravel Biking, Humor, Mountain Biking, Triathlon on February 2, 2020.
← The Rule on Wearing Team Jerseys… The Side Rule That Shall Not Be Broken, Lest You Incur Good-natured Verbal Abuse and Laughter for the Infraction Halftime Show for the Ages… It Was Fun Explaining Why Grown Women Wear What They Do to My Daughters →