Home » Cycling » What Kind of Road Bike Does One Need to Fit Their Skills and Needs? More Important, How Much is Too Much Bike?!

What Kind of Road Bike Does One Need to Fit Their Skills and Needs? More Important, How Much is Too Much Bike?!

As one might imagine, this is a topic near and dear to my heart. I’m going to enjoy writing this series. 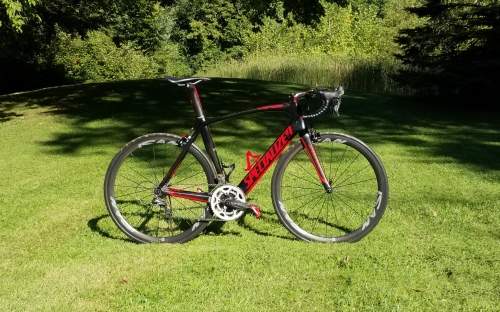 The amazing, fantastic, fast, sexy-in-a-Ferrari-kind-of-way, road bike. For those who want to get down the road as fast as is scientifically possible on their own power, the road bike is the most efficient machine on the planet to do that. Now, to be fair to the time trialists, a claim could very well be made that the time trial bike is indeed more efficient – and that is correct… until one adds a friend. When riding any more than solo, the TT bike is a death trap in all but the soberest, pro-est, of hands. For that reason, and the fact I’m a social cyclist and a little selfish (it’s my blog, baby!), I’m going to stick with the road bike.

Depending on what you want to do with your road bike, where you want to ride, and with whom you want to ride, your needs will change. With this post I hope to help new cyclists enter into an exceedingly expensive sport with a little knowledge that might help save some headache and money. 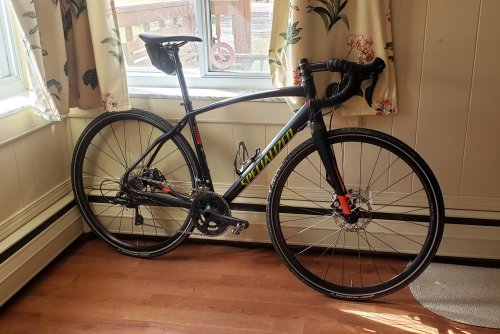 For an in-depth look at what you might want in a gravel bike, click (here). For the larger overview, if you can only have one road bike, the gravel bike is the way to go. With the right gravel bike and two sets of wheels (and tires – one for dirt, one for pavement), you can do anything. With the right setup and the proper level of gravel bike (and the fitness to move it), you’ll be able to keep up with any group you want – as long as you’re willing to put the work in. 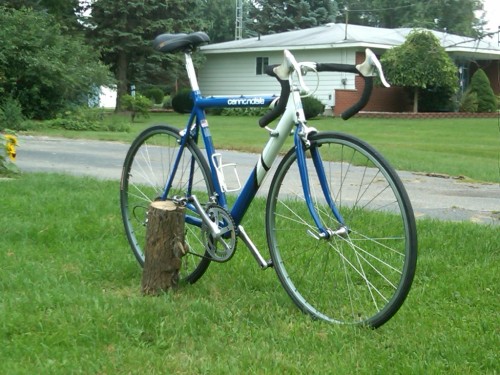 Please forgive the log prop… I was a noob back then and didn’t know any better (as one would be able to tell from the saddle).

If you’re going to be rolling with the 10-mph to 16-mph crowd, a good old-fashioned classic will do just fine. You’ll have to work a little harder than everyone riding modern rigs on hills because shifting is awkward by comparison, but you’ll make up for any disadvantages with want to. If you’re “noob” enough to think this will be okay (obviously I was/did), accept that you’re probably wrong and you’ll be buying another bike shortly after you purchase this one. The real question will be, are you stubborn enough to stick with your choice? Because those old classics require a lot more fitness to keep up with others. I was not willing. I picked up a better bike less than six months later (see “The 10-20-year-old Classic with Modern Components” below). Five months to be exact. I know what you’re thinking; I’ll be able to make it on a classic. You’ll be right if you’re riding with the slower crowd. If you want to ride with the C, B, or A groups, you’re going to need a better bike… and even if you don’t need one, you’ll want one. 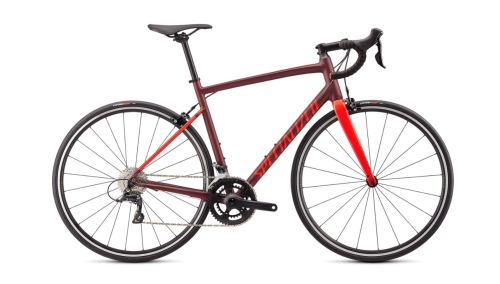 Many of us start out on a $1,000 road bike like the Specialized Allez (pronounced Ah-lay – it’s French, they shout it at the Tour de France, it means “come on”) because a $4,000 price tag on a bicycle seems outrageous. The Allez is a decent place to start, of course. Decent for the money. This will be good for the 12 to 20-mph average pace crowd. Any faster than that and a heavy entry-level bike will be too much work. From the terrible wheels, to the poor gearing choices, to the heavy overall weight of the bike, for the F through C groups, an entry-level bike will do. I’ve only seen one guy ride an Allez in a B Group setting. One. He’s since upgraded to a Specialized Venge. If you’re going to settle for entry-level, you’ll have to ask yourself, are you that person? If not, grade up. 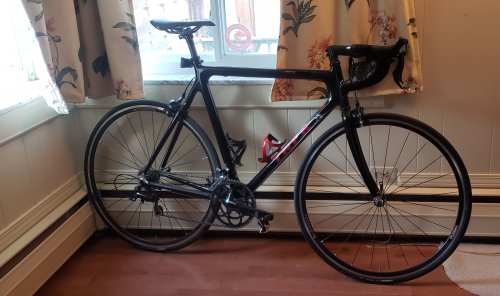 If you know how to look, you’ll find fantastic deals on used classic bikes. I picked the gem above up for a cool $750 from the local bike shop. Then I dropped $450 to have it painted, about $500 for some decent wheels and another $350 on other parts. I can ride that bike with anyone up to the 23-mph average crowd. The wheels do make it tough work, though – I could use a set of 38-50 mm carbon wheels on that bike because they allow you to keep the bike up to speed a little easier. On a bike like the one shown, with the right fitness and a decent set of deep dish wheels, you’ll be able to keep up with any group your fitness will allow you to. Doing the math, I have between $2,100 and $2,700 give or take, into a race-quality bike (I don’t even the remember the right amount the bike’s been through so many changes). On a budget, that’s as good as you’re going to get. Throw in another $700 for an upgraded set of wheels and your fitness will be your only limitation. With this bike, with the right transmission to suit your needs and decent wheels, you’ll be able to show up and ride with anyone your fitness will allow – A through F groups. 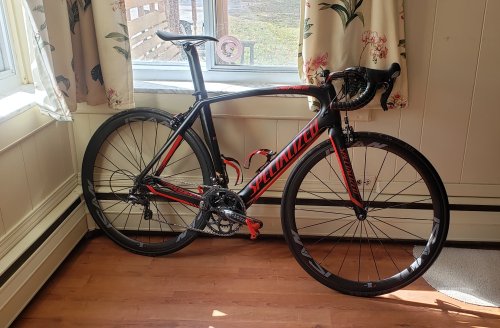 The mid-range race bike will run you between $3,000 & $7,000 and once you get to this quality in a bike, you have no more excuses as to why you can’t keep up. At this point, if you can’t keep up with the group you want to ride with, it’s most definitely you. Spending $3,000 on a bicycle isn’t easy – spending double that is harder… but it’s oh so worth it once you throw a leg over the top tube and clip in. This is where you can start to bump your head on too much bike for a group. While I don’t know many people who would ever deny another the enjoyment of riding a top-level race bike out of jealousy, a steed like this isn’t meant to be ridden on a nice little weekender with granny. If your idea of riding a bike is a nice 15-mile ride over the course of an hour and a half, you don’t need anywhere near this level of bike. Groups D through A; your only limitation will be how hard you can push on the pedals.

The top of the line in road bikes will set you back between $8,000 and, for either of the two high-end racers above, $12,500. You can spend more on a top-of-the-line bike (the Bianchi-Scuderia Ferrari with Campagnolo components will run you a cool $18,600), but at that point you’re paying for the nameplate. You’ll be riding what the pros ride. You’ll have the lightweightiest, fastest, carbon fiber’est, ceramic bearing’est steed on the market. If you can’t keep up with a group on this bike, saunter up to a mirror and look in it. That’s your problem.

If you can afford a steed like that, ride that rig with a smile on your face because that’s as good as it gets.

If you show up for anything but the A, B or maybe the C ride with a top-end steed, you will unquestionably get a quizzical look or fifteen. Knowing what I know today, if I had the money laying around to blow on his and hers Ferrari’s, I’d do it. Owning one would be spectacular, but mostly unnecessary. I wouldn’t be any faster on that than I would the Specialized Venge I have $6,000 into.  High-end bikes don’t make a cyclist faster.  They make fast easier.

By bgddyjim in Cycling, Fitness, Gravel Biking, Humor, Mountain Biking, Recovery, Triathlon on April 15, 2020.
← What Kind of Road Bike Does One Need to Fit Their Skills and Needs? The Gravel Bike. Just Like That, iSSi Pedals Restored My Venge to Its Former Glory… Err, Only Better. →