Road Bike Shifting – Tinkering Your Way to Perfection (It Takes a While to Figure It Out, But the Practice Is Worth It)

I noticed on Venge Day, by chance, (the first day of the year that warrants taking the good bike out) the chain was rubbing in the little ring when in the last three (small) cogs on the cassette.  Thinking back, I never checked that end of the cassette in the small ring.  I think I forgot… because who rides in that gear combo anyway?!  Now, this would never be a cause for concern, really, as I never use those last gears in the baby ring.  Who would?  A blast from my writing in the past:

If you’re fast enough that you’re in the smallest three gears on your cassette in the baby ring, you should be in the big ring.  Everyone knows this.

With an abundance of time on one’s hands, though, why not play around a bit?  I have always been afraid of set screws because I really messed my first mountain bike up when I was still a noob.  I made an absolute mess of the shifting that took me hours to get right again.  The instructions below changed me, though.  Practice makes perfect and I’m anything but, so I got my tools out to play.

Shimano’s diagram for setting up a front derailleur has been the biggest help to my mechanic skills as anything I’ve read in the last five years… well, accept the directions for how to perfectly wrap a handlebar that Trek now has with all of its Bontrager bar tape. 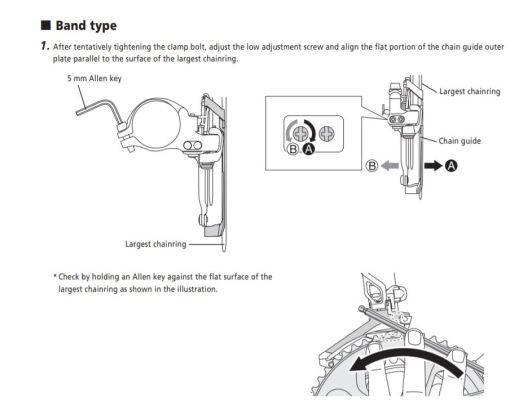 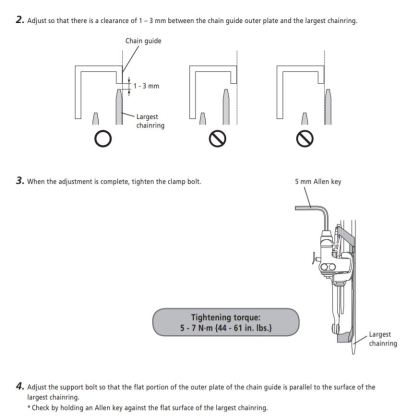 With those simple instructions I was able to set up my Trek flawlessly (every gear, only having to trim the derailleur in the baby ring for the smallest cogs).  Then I did the same to my wife’s 11 speed alias.

With that initial setting done (you do have to make sure the low gear won’t rub), from there it’s just a matter setting the outer limit screw so you don’t rub in the big ring/little cog gear.  Simply shift down to the small cog on the cassette and turn the outer set screw till you’ve got a millimeter of space between the cage and the chain.  That done, the only thing left is a matter of cable tension.

Mrs. Bgddy’s Alias rubbed gears since I brought it home even though it was taken into the shop to have the issue looked at.  After working extensively on my Trek and dabbling a little on the Venge, I set out to fix my wife’s bike once and for all.  Twenty minutes is all it took.  She’s got every gear now (unlike me, my wife has no hangup about using every one of her gears).

Even though my Venge was close enough for government work, with some extra time on my hands, I set out to make awesome better.  First, I took the wheels off and cleaned off what little dirt there was from my first few days outside on the bike.  My Trek can have a little dirt on it.  The Venge?  Not so much.   Then I attended to the front derailleur… after ten minutes of farting around  I got two more gears but still can’t get the 11 tooth cog without messing up the big gears in the big ring.  It’s so close… but I’d rather have all of the gears in the big ring and leave the last gear in the baby ring to rub a little bit.  I just don’t use that gear.  Ever.  Not even by accident.

Tinkering with my bikes over COVIDcation made me a better mechanic.  Tinkering has been a source of joy ever since I brought my old Trek mountain bike home.  It used to drive me nuts to mess things up and have to run a bike up to the shop.  Now that I’ve actually acquired some skills, I have a lot of fun with it.

Speaking of, I’ll have something new to write about in a few days.  C’mon UPS!!!