A Simple, If Humorous, Note on “Listening to Your Body”

Trigger (heh) warning:  If you happen to be a sissy, the following might trigger you into sucking your thumb and curling up into the fetal position for anywhere from five minutes to several days.  Do not read this post if this is something you’re capable of.  I haven’t sucked my thumb since I was knee-high to a grasshopper (I think I was 3) and the last time I was in the fetal position, I was actually in the womb, a person like me would be reasonably safe to read what I’m about to write.  You have been trigger (heh) warned.

My daughter, for my 50th birthday, baked me the most delectable carrot cake (with cream cheese icing, of course) to ever have passed my lips.  It was one of those cake eating experiences that, because it’s so utterly fantastic, makes you close your eyes in ecstasy the first several bites.

So there I am last night, sitting on the couch after a big, fast Thursday night ride (36 total miles) and, because I’m so attuned to what my body is telling me, my body says, “Hey, yo!  Down here!  Hey, I need some carrot cake down here!”

Well, now that’s a reason to rejoice right there!  My body says it needs carrot cake!  Well, you know what happens next:  I’m ass-deep in cream cheese icing when I realized I’d made a mistake in interpretation…

My body only asked for carrots.  My melon filled in the “cake” part.

The Noob’s Guide to Cycling Clothing: Bibs, Shorts, Jerseys… Are The Expensive Options Worth The Money? (And How and When To Go Cheap)

So, I think the real question is this, are those high priced cycling clothes worth the crazy price tag?!

Now, two years ago I’d have said, “it depends” or maybe even given you a flat-out “not really, but(t)”.  See, expensive bibs and shorts are, without question, worth the money if you’re going to be putting in long days on a saddle and you can afford them without undue pain to the finances.  We’re looking at, say 60+ miles in a day.  I’d also have then added, the jerseys really aren’t necessary but they’re a nice luxury.  Today, my opinion has changed for the pricey on the jersey after a few lucky purchases…

We’ve all seen the noob just getting into road cycling sporting the Sponeed kit (hell, I have a Coconut kit myself).  While the Chinese brands are acceptable, even fairly comfortable. for shorter rides, they tend to fall flat (read that “painfull”) over longer stretches in the saddle.  But what about the jersey, you ask?

The jersey is where this gets fun.  I actually really like my Coconut jersey, and Funkier has some good stuff, too.  That said, while the cheaper Chinese stuff is passable, the expensive tech stuff, say the Specialized SL Race and SL Air jerseys, are fantastic in warm temperatures.  Sadly, they suck if you’re a little chunky because they show a lot, but they are vast improvements in that they help to keep you cool in the heat.  A lot better than a standard jersey.

Even our standard Affable Hammers jerseys from Mt. Borah, as fantastic as they are (and as well as they hold up over time – they’re literally spectacular in that regard), pale next to a newer full tech kit (Mt Borah does have a tech line that’s spectacular, I just don’t own any of those jerseys to be able to comment on them – my friends are very pleased).  The newer tech kits are so good at wicking moisture, over a long ride I’ll end up with a salty crust on the outside of the high quality jerseys.

This is where this post is going to get important.  Lean in, real close… [whispering] I can’t afford expensive kits.  I’ve got a fleet of bikes to maintain, my wife and I both ride, and I don’t make a Quarter of a Million Dollars a year.  We feel the pinch of cycling’s expensive nature now and again, but I’ve learned how to avoid paying top Dollar for top-of-the-line cycling clothing.  I buy everything on sale.  The aforementioned Funkier?  They have a sale on bibs going on right now, all sizes available, $19.99.  That’s not a typo.  I bought two pair.  Even if they just sit in the drawer till I need them, they’re worth it.  Specialized team kits – I bought two last year.  Normally $300+ for a jersey and bib set, I paid less than $150 each set.  Specialized’s bibs?  I bought two pair from the SL line for $99.99 – $50 off one pair and $80 off the other.  I bought an SL Air jersey on sale for $37.99, I think that jersey was $60 off retail – and I bought several items for my wife using the same technique.

The key is shopping when I have money, and avoiding it when I don’t.  We’ve had to drop a couple grand on making my vehicle run properly lately and that’s put us in a bit of a pinch so I absolutely quit shopping.  I don’t even look.  No need to tempt myself.  On the other hand, I laid out a lot of cash picking up the items I mentioned above.  $300 for a couple of cycling outfits is a lot of money… but I didn’t spend $600.  The key is finding the deals when they hit and having a little bit of backup cash to blow in the event I find something worth purchasing.

And when cheap will do…

Let’s say you don’t have the disposable cash to make the bigger purchases – $150 for one kit is simply too much.  First, stick to black bibs or shorts because they’ll go with any jersey – don’t purchase a pair of bibs that obviously has a matching jersey that will have to go with the shorts.  You’ll end up buying the jersey when you realize how dorky the shorts look with another jersey.  Second, the less expensive cycling clothing works on shorter rides.  See, I’ve got four distinct kits for long distance cycling – I need that many for DALMAC, a four-day tour from Lansing, MI to Mackinaw City, MI (380 miles in four days).  I’ve also got several less expensive jersey and bib combos to choose from for 20 to 50 mile rides.  It makes sense to not to wear the good stuff on the short rides because I won’t wear it out near as fast if I’m only washing it a dozen times a year, rather than once a week.  Set out with a strategy to maximize the bang for your buck.  You’ll appreciate it when you’re coming down the home stretch of a hundred mile ride in the dead of summer and you’re feeling a lot fresher than you normally would in a lower-quality kit.

And to put a nice little bow on this post, in the event you can only afford the cheap, Chinese Sponeed or Coconut cycling kits, buy ’em and be proud.  “Want to” is a lot more important than an expensive kit.  That “want to” just hurts a little more when you don’t have the best cycling clothing money can buy. 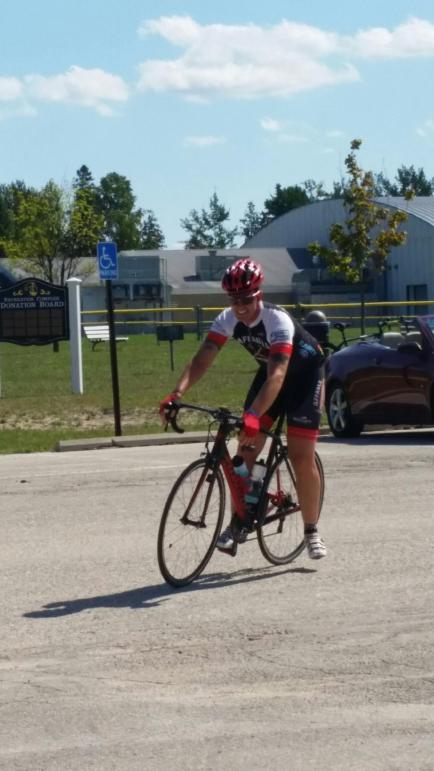 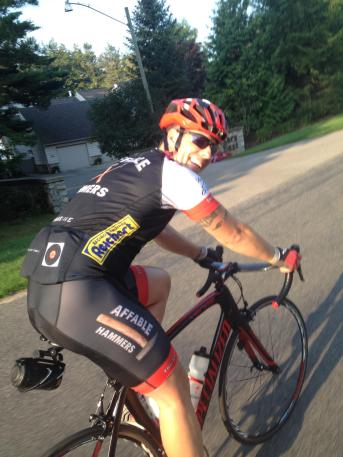 UPDATE:  The Omil, down in the comments section, makes a fantastic point as seasoned cyclists go.  Do give that comment a look.