Home » Cycling » Can Something As Simple As A Quick Release Skewer Change A Bike’s Ride Characteristics? The Halo Hex Lock Skewer.

Can Something As Simple As A Quick Release Skewer Change A Bike’s Ride Characteristics? The Halo Hex Lock Skewer.

I can’t believe I wrote that Title. The idea that a quick release skewer could make a difference in a bike’s ride quality is… well, crazy.

But it’s dead-bang true. A simple skewer can vastly improve the quality of your bike’s ride. A $20 set improved the ride quality of my $6,000, 15-1/2 pound Specialized Venge… and significantly.  I kid you not.

I bought two sets after a friend showed me the set he put on his LeMond 105 steel race bike (it’s a spectacular bike). He said they were surprisingly light and relatively inexpensive. He had me at light weight. Inexpensive helped get them by my wife. One set for each road bike.

They showed up Tuesday, just before I had to split for my normal Tuesday night ride… so I did what every over-exuberant knucklehead cycling enthusiast does when he gets a new, untested piece of high-end equipment… he throws it on the good bike and tests it on the fastest ride of the week.

Had I not had speed on the brain, I might have thought that through a bit more. 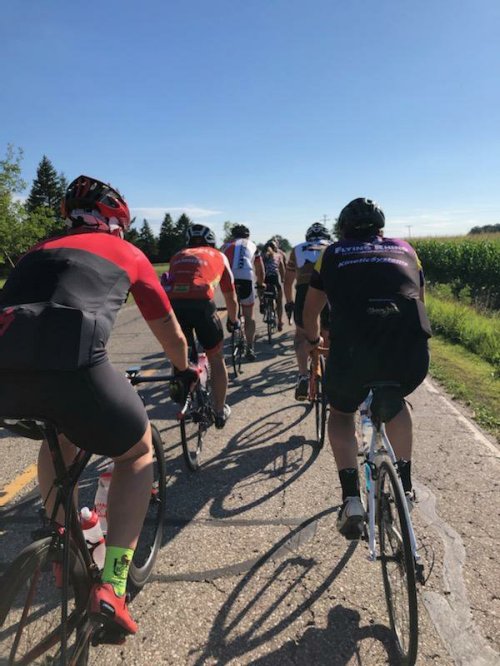 There they are in action.  I’m on the left.  Joel, a good cycling bud of mine, took the photo.

Our Tuesday night ride, if you haven’t read my posts before, is very fast.  I’m in the B-Group and we’re usually between 22 & 24-mph for an average pace over 28(ish) miles.  Much of the asphalt we ride on it great, but a few miles leave a little to be desired.  One of the bad sections has got those expansion cracks every twelve feet or so.  They can be jarring at 28-mph.

The Halo skewers, with no cam action were noticeably rock solid over the pavement so I had a more connected feel through the handlebars throughout the entire ride.  This meant that the tires did what they were supposed to do, absorbing the bumps rather than transferring a little jolt through the forks because the normal quick releases give where the Halo’s don’t.

This will probably read as though the information is a little off.  Surely, when you tighten a normal quick release and bounce the front wheel off the ground, it’s solidly attached and there’s no “give”.  I know, it was very difficult to write what I did, the fear of someone thinking I did something wrong and I’m stupid is there… but I’m not wrong.  No matter how hard you crank down a traditional quick release, it won’t be the same.  Believe me, it’s worth Twenty Bucks to find out for yourself.

They’re so good I’ll be ordering two sets for my wife as well.  One for her road bike, one for the gravel bike.  Halo skewers are incredibly light (the rod is chrome-moly) and absolutely solid.

If you’re happy with your traditional skewers, fantastic.  If, however, you’re tired of the climbing creaks if they’re not cranked down impossibly hard, or you want to shed some weight and have a better feel of the road through the handlebars, try a set of Halo’s.  I’m glad I did.  They’re welcome upgrades to both my race and rain bikes.