My confidence wasn’t where it should have been. Maybe it was the cold. Maybe the third day of gloomy, damp weather in a row. Maybe it was the north wind. It could have been all of it. With the ugliness of the day, I’d always take the Trek. Not today. I needed every advantage I could get. I prepped the Venge. 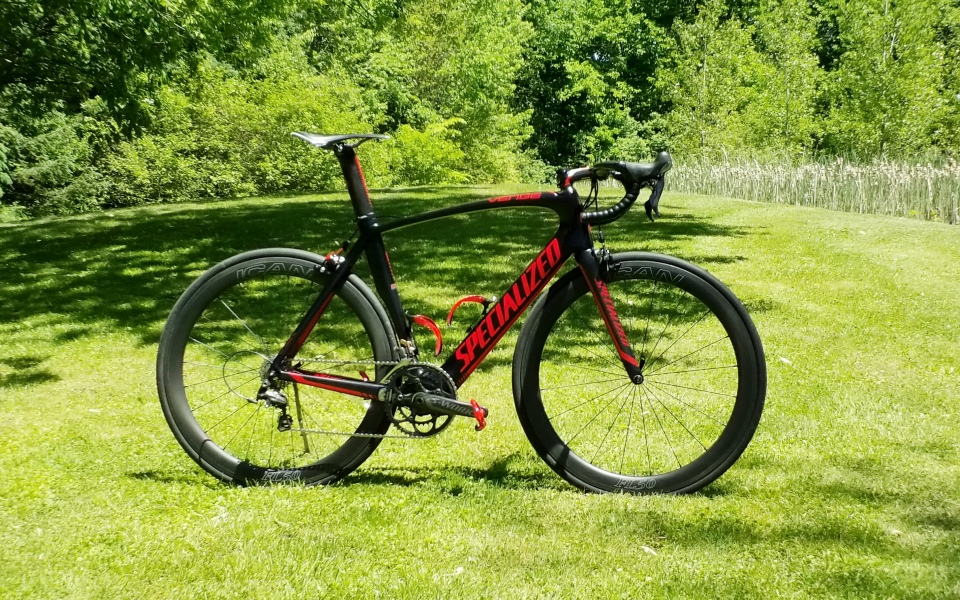 Jason and I were there early and it was looking like a small crew, which I saw as good because I really was hoping for a slow run. I did a few laps around the parking lot as a warm-up rather than burn any matches I didn’t have.

As I was getting the legs ready, the fellas started rolling in. A couple of heavy hitters, a couple in-betweener’s, a few B guys, a C guy… and Lenny. I started chuckling as soon as I saw his car roll in late. Lenny? Fortunately, for once, Lenny opted for his Schwinn road bike over his TT bike (!) so he wasn’t going to be a factor on this ride.

We rolled out after waiting for Lenny to get ready. We should have rolled out at 6, but there were a couple of guys who couldn’t live with doing that to a fella. Lenny, on his 35 pound Schwinn, managed to stay with the group for about 45 seconds. We were off!

The pace jumped right out of the gate. I was a little uncomfortable and trying to settle in – trying to get that nagging negativity out of my head. I freaking hate the cold and at 58°, cloudy and windy, warm it wasn’t. We hammered up the first hill and then down the other side. A right turn, up a highway overpass and down to a left with a long, gradual downhill. I’d been third, then second bike through all of this and Levi flicked me up just as we made the left – which was perfect because I was going to get my pull done before the big, long hill that was staring us in the face. And up comes a new guy from the back who gets in front of me and asks, “Hey, can I take my pull now? I’m going to get dropped”.

My jaw dropped. For those who aren’t up on their pace-line etiquette, this is one enormous @$$hole move. Don’t ever do this to someone. Ever. Still, he’s a new guy and I’m a bad@$$, though on an off day, so I took it. And got dropped 3/4’s of the way up the climb. So the new guy got himself dropped and me with one stone. I knew there was a regroup at the top of the hill anyway, so I didn’t sweat it much… but that’s exactly why you don’t do that $#!+ to someone else. I’d spent a lot of time in tough positions (1st, 2nd and 3rd bike get hammered with more wind than 6th or 7th) with my heart rate nearing my max. By the time the new guy was done with his turn, I was already maxed out and I still had a turn to finish, up a freaking hill, to deal with.

Things calmed down after that, though. Well, ish. It was a really fast night. Levi and Mike were driving the pace and Jason was hard on the gas, too.

The Lake Shannon section of the route is always a blast – a lot like our trip down to Georgia – rollers and twisty roads make for a fast and fun rip around the lake. Last night was perfect. After a decent effort up an ugly climb we regrouped and waited for a few stragglers (as is normal). Once back together, we took a few seconds to form up and spin up to speed. I was starting to get a little antsy and thought about going up front to drive the pace when all hell broke lose.

I switched from the hoods to the drops so I could lower my center of gravity and carve the corners a little better. The increased aero advantage didn’t hurt at that speed, either. We were winding around bends so fast you had to look through the turn to get your bike to follow the right line with your leg out to the inside of the turn to help the bike carve the line. I can’t help but feel spectacular when we’re cranking and banking around corners at 25 to 30-mph in the drops, hellbent for leather. Any cyclist who’s taken corners at speed, especially in a pace-line, can relate. “Invigorating” doesn’t do it justice. “Grin inducing” is close.

Upon exiting the lake subdivision, we’ve got another brutal climb. I PR’ed it last night and still got dropped on the way up. Not by much, though. I’d almost fought back to the group when we hit the next regroup point. The next two miles were fast enough to make my eyes water. Dave had suggested we wait at the top of the final hill, cutting about a mile off the course – and I liked it. The last major hill on the ride, let Levi pound the other guys, while we hang back and join them on the flat!

Sadly, it was all headwind after that, though.

Dave took the stretch waiting for the back four guys to come up the hill and left me with an ugly section, uphill and into the wind, once they did. I took the pace up to 21, but with the incline, it was everything I had. At the crest, I flicked off and enjoyed being towed for the next several miles – including a massive turn up front by Jason who kept a decent “into the wind” pace with quite a lot of up to his turn – at least a mile and a half, maybe two. It was big.

My next turn, then, was with a crosswind and downhill (thanks, Jason!). It was sounding awfully quiet so I took a quick peak back to find nobody there. I slowed up and waited for the group to catch and then cranked it back up. Levi, Mike, and Jason came by on the way up a hill and I latched on with them for the next section.

I was tempted to ask Levi if he was Catholic, because the pace he was holding and length of turn up front he was taking, it had to be penance for something. Fortunately, we had one last regroup after a short climb that I’d managed to fall slightly off on before hammering the last couple of miles.

We went right to it, hammering down the road again. I ended up with one last pull, right before the last big climb and I ran myself out of gas, four of the guys pounding up the hill. I let them go. One of these days I’m going to figure out how not to give up before that hill…

Meh… I pulled into the parking lot with a 20.6-mph average. Not fantastic, but not too shabby, either. I was definitely glad I went.