Go Figure, It’s the Slow Century that Hammers Me Hardest… Plus, REDEMPTION!

Saturday’s ride had all the makings of greatness.  Great group of friends, great mileage, a new route, sunshine (well, ish), decent temps and wind in the single digits… and the promise of a reasonable, easy pace.

We rolled out early with no care in the world about the aforementioned pace.  With everyone formed up and rolling after serveral SNAFU’s, the 65 mile route was fairly enjoyable, though we spent a few miles on roads that resembled the cobbles in the Paris Roubaix.  I think I’ve knocked something loose on the Venge.  I was feeling quite good toward the end of the 100+k’s.

Then came the rough stuff.  Most of our group took their toys and went home leaving Chuck and I to the last 34 miles.  We’d both gone to our respective homes to drop cool weather gear that was no longer needed.  We met on the road near Chuck’s house and headed out with a tailwind to our usual weekday route so we could keep the remainder local and minimize the north/south travel, thus negating much of the headwind.  First was an out and back loop, then to our favorite late century stop, Subway, for lunch.  I like a good, toasted submarine sammich on most days, but 75 miles into a century, I don’t know what it is, but I prefer my favorite sub over a burger.  Every time.

The only problem is starting out after said Subway sammich.  And it really sucked Saturday.  We trundled on, though, taking our time heading to a nice little subdivision that takes a shade more than 2 miles to complete a loop.  We did five, losing several tenths off our average that was already low.  We exited with an 18.1 average and ambled home into a cross-headwind.  Our pace, other than stops for intersections or lunch, was remarkably steady between 18 & 20-mph for the last two-thirds of the ride, though (64 miles).

With eight miles to go, I was ready to be done.  My feet were hurting, and I was tired.  We pressed on, though, and I even had to ride with Chuck most of the way to his house to get another couple of miles, lest I ride all that way to come up two short of an even 100.

I pulled into the driveway with 100.17 miles and I was cooked.  My slowest century in the last seven or eight years, and it hammered me.

I’ll be trying to figure the dynamics of this one for some time.  I had the good bike, an easy pace, perfect weather (if a terrible wind out of the southeast – we simply have no out an back routes to counter that wind), and a good pace-line with a great group of friends.  This one should have been easy.  It wasn’t.  However…

Sunday morning, after raining all night, I prepped the tandem for Sunday Funday.  I woke up a little on the wrecked side, and I was looking forward to an easy 17-mph 40-mile morning.  The pavement was soaked and didn’t look like it would dry up before we rode, so I was infinitely grateful for our fenders… not exactly sexy, but when you’re riding on wet pavement, they keep the bike and my wife and I dry – and whomever happens to be drafting us gets a clean draft rather than having to eat spray.

Unlike Saturday, the first half of this ride was going to be headwind – and with zero chance of us getting all the way out before the wind changed directions.  We had Chucker, Mike, McMike, and Diane and Jeff on Diane’s tandem and we set the pace going out.  Thankfully, there wasn’t much of a breeze for the first six miles but it started picking up as we neared our first turn.  We gave up the front and the group echeloned easily heading south.  We stair-stepped the headwind and, entirely against the norm, entering my favorite sprint in all of the roads we travel, my wife and I remained in formation.  As we passed the City Limits sign I told my wife that I didn’t need to burn matches I didn’t have – we were 14 miles into a 40 miler.

We stopped for a bit and rolled out again into the wind… three more miles dead into it, followed by a crosswind, and then, sweet, glorious tailwind – and the wind had picked up nicely during the crosswind section.  We stopped again after the crosswind section and I bought a Coke for my wife and I to split.  It was a relatively short stop and we were back after it.

We took the lead because I knew, maybe four miles up the road, there was a City Limits sign that I wanted.  We took it fairly easy heading down the road at 22 to 25-mph, letting the wind do its thing.  My wife asked me to shift down a gear so she could spin her legs a little before the sign and I obliged (heh, how cool is that – “I know we’ve got a sprint coming up, so let me get ready”… that’s love, baby).  Up a little incline and just before the top I put the hammer down, my wife in tune with me.  We thundered down the back side of the hill, Mike threatening to overtake on the left.  I gave it one last hammer and we crossed the line, about a bike’s-length to spare at 33-mph.

My wife and I gave up the front after that and, after a longcut around a six-wide train track intersection that we avoid like the plague, we hammered down the road toward home in the draft, picking up a 3rd and 5th place on a couple of seriously contested segments along the way.  I don’t know where it came from, but we were both hitting the pedals hard.  Sometime after our first stop, my legs came back but we were holding speeds north of 25-mph, at times up to 28 with just a 12-mph tailwind.

There were a few times I thought about sitting up and taking it easy heading back but I thought better of it.  We pushed on till the last quarter-mile and we pulled into the driveway with 40 miles at a cool 19-1/2-mph pace.  And redemption.  Saturday was a rough day, but we over-performed Sunday.  Good times for sure. 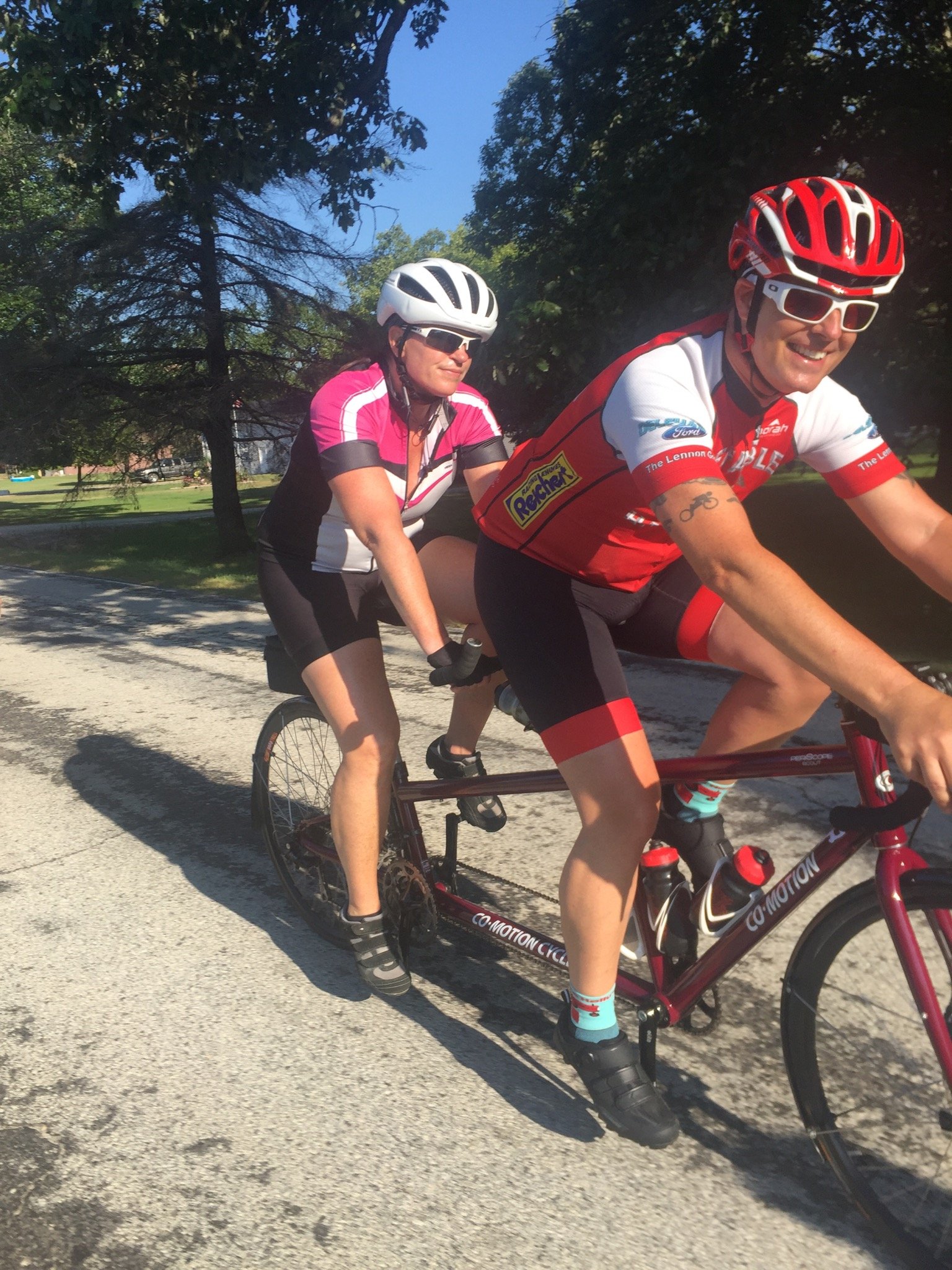