Home » Cycling » An Experiment in Saddle Width: We Know Too Wide is Bad, But What About Too Narrow? I’m About to Find Out the Fun Way

An Experiment in Saddle Width: We Know Too Wide is Bad, But What About Too Narrow? I’m About to Find Out the Fun Way

At the end of autumn, 2012, I was fitted for a Specialized Romin 143 mm saddle.  I’ve got one on my Diverge and one on my Venge.  I rode with one on the tandem for quite some time as well, but switched to a Specialized Toupe Sport – 143 with the hope of a little more comfort as I’m on the saddle for miles on end on the tandem (the saddle that came on my Diverge – I love that saddle).  I’ve ridden 143-mm saddles forever, until I bought a Bontrager Montrose Pro Carbon for my 5200.  That saddle raised my eyebrows it’s so comfortable – and it’s a 138.

When I ride my Venge a lot, and I do ride it a lot, I can end up with a saddle sore on the right side of my inner thigh, just forward of the sit bone.  Some years I go without a saddle sore, others I seem to have one every few weeks.  There’s no rhyme or reason except that they’re painful when present.

That persisted until I started riding the Trek with the 138 Montrose more.  I don’t have the same problem on the Trek.  The Montrose 138-mm saddle doesn’t touch the same location because it’s not as wide.

I pulled the trigger on one after two days of contemplation and some research.  I want to see how I feel on that 128.  The 143 Romin is livable, as I’ve been riding one for the better part of eight years with a few saddle sores to show for it, but I know the 138 is vastly superior… so if 138 is better…

The theory, going from what I’ve read on forums, the more aggressive the position on the bike, the thinner the saddle should be.  When I was measured, all those years ago, I was sitting on a bench in a relaxed, upright, position.  My position on a road bike today is vastly different than that measurement posture.  They say, as the position gets more aggressive and the rider tilts forward, the sit bones narrow.  This aggressive position requires a narrow saddle and would explain some of my past difficulties.

Anyway, I’ll know this afternoon – and I’m fully prepared to, after a few rides, to have to package that bad boy back up and sell it to the shop or put it on eBay.  But I want to know, though.  I’ve gotta test it out.  It’ll be an easy 25+ miler this afternoon, followed by a full-immersion test tomorrow – I’ve got a hundie on the docket.  Hey, why go at it with half-measures?

On a side note, I’ve tried too wide as well.  The original saddle that came on the my 5200 was a 155 and it hurt a lot.  I ended up with severe hamstring pain for riding so much on that behemoth of a saddle.

Now, where this gets really interesting is the bike that new saddle is going on… I’ve only got one Trek in the stable and that bike already has a Montrose on it.  The new Bontrager saddle is going on my Venge. 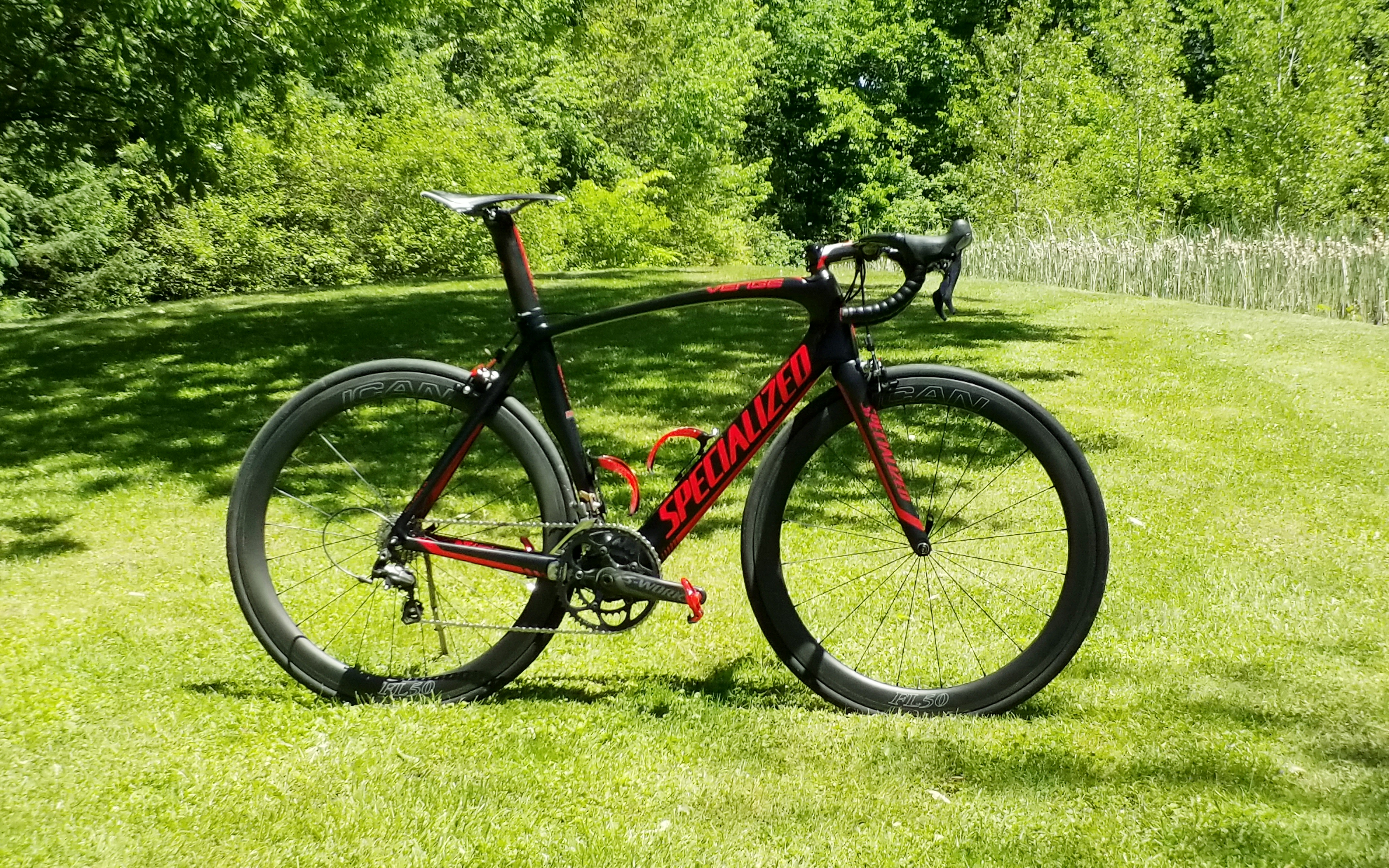 I know, gasps of awe and confusion, shock and chagrin… A Trek saddle on a fully customized, fully badass 1st Gen. Specialized Venge Comp upgraded to an S-Works?  Hey, when a comparable carbon Romin goes for $300 and I can get a lighter saddle I already know I love for $80… well, some of that craziness about mixing and matching brands goes right out the window.  The heinie shall be happy!

More next week.  I’ll either be smiling or limping.  Chuckle.

By bgddyjim in Cycling, Fitness, Gravel Biking, Humor, Mountain Biking, Recovery, Sports, Triathlon on October 9, 2020.
← With Addiction, A Relapse is a Relapse as a Duck is a Duck. An Experiment In Saddle Width: Initial Findings Are… I Have a Narrow Keister →