One of the easier ways to customize a road bike to how you’ll ride is the cassette.

While many will stick with the cassette that came with the bike, because the big manufacturers usually do a pretty good job of including a decent cassette that matches their bike’s intended use, we can do better for the avid enthusiast.

One of the most common cassettes out there is the 11-28 tooth 10, 11, and now 12 speed. Paired with the right chainring combination up front, a decently strong cyclist can climb just about anything on that cassette. I prefer the compact 50/34 setup with the 11-28 cassette, however.  Though I’m a decently strong cyclist, I’m not fast enough to get away with the 52/36 or the 53/39 combo with that cassette. The bigger cogs (easier gears) jump too many teeth, so at critical speeds I always felt like I was in the wrong gear. The “hole” shows up between 18 & 22-mph with the 52/36, but at 14-17 with the 50/34.

The 11/28 paired with a compact crankset, I can ride just about anywhere in my State without worry. This is a great choice for my tour/rain bike. The key, though, is that the cassette perfectly matches my high-end and low-range needs. I can get up to 40-mph before I gear out, and I know from experience I can get up anything up to 22% in the 34/28 front to back combination.

For my race bike, I go with a smaller low (easy) gear. I roll, at least for now, a 52/36 chainring combo with an 11-25 tooth 10sp cassette. The smaller easy gear means only a two tooth jump in gears at the bigger gears.

The smaller low-end gears match my normal riding conditions for that bike perfectly. I rarely climb anything that requires the baby ring up front, let alone the 25 tooth ring in the back (Notice there aren’t any wear marks on it? That cassette is a year-old).

While the Venge would be a formidable climber and tour bike (not touring, tour), I save that for the 5200. The Venge, with its internal cable routing (including through the handlebar) is a little more finicky when it comes to getting wet and dirty. The Trek, on the other hand, is externally routed and very easy to clean, and if necessary, swap out cables and keep it operating smoothly. Besides, it’s nice having a separate bike for fast days and the tours.

Now, if I wanted to be even more persnickety, I could technically drop that 11-25 tooth cassette down to an 11-23 to get the gears even closer to the near perfect “one tooth drop per cog” where I’d only be dropping 5-rpm per gear in my cadence. There’s one reason I don’t; while I don’t use that last 25 tooth cog very often, I do use the 23. If I were to drop to a true corncob cassette (meaning a cassette that more resembles the head of a corncob, where the gears are close together) I’d want to use that last 23 tooth cog regularly, which would mean I would cross-chain in the big chainring. Cross-chaining, or riding in the biggest cog in the back in the big chainring up front (or the small in the back and small up front) puts a lot of stress on the chain and the drivetrain. We want to avoid that whenever possible. In my case, that means going with an 11-25 over an 11-23 tooth cassette.  Sometimes it’s even important to consider the gears you won’t be using.

Why does it even matter!?

For those who ride solo all of the time, who rarely ride with others, but who don’t “compete” in triathlons (if you’re there to “compete”, then paying close attention to gearing is very important, especially on a time trial bike – if you’re just doing triathlons to have fun and as a reason to train, you won’t need to worry as much), you’ll be able to use whatever you’ve got and being finicky won’t be as necessary.

Most newer cyclists aren’t quite aware that a bicycle customization is possible with something as simple as picking a cassette.  We should take every mechanical advantage to make our ride more enjoyable, and where applicable, faster.  The lowly cassette is one of the better, reasonably priced places to start*. 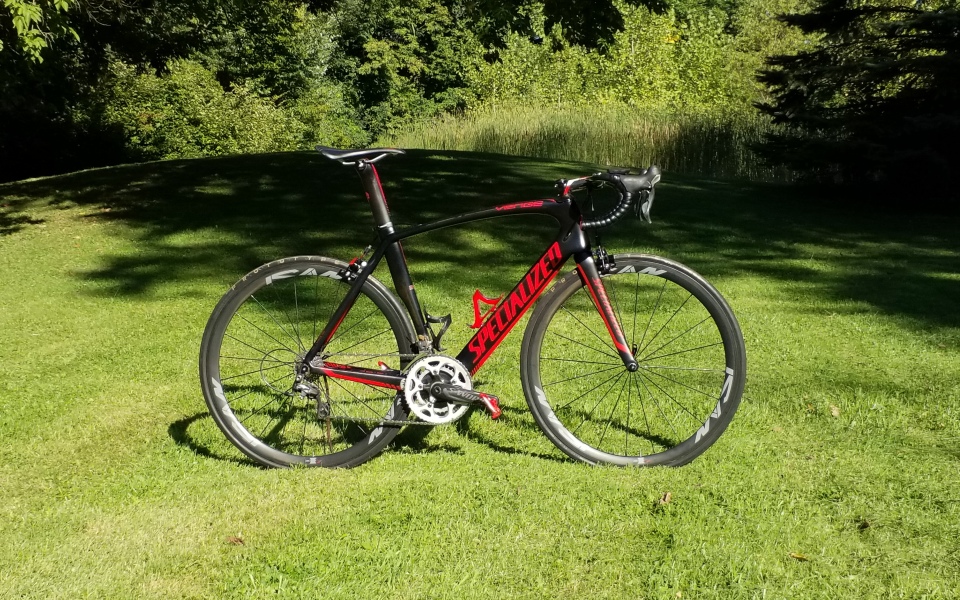 *Reasonably priced tends to be a matter of opinion.  Some people think it’s nuts to spend $80 on a cassette.  Those people should price a SRAM Red cassette and get back to me.

What I Learned about Climbing Hills, Gears and Shifting on My Cycling Sabbatical 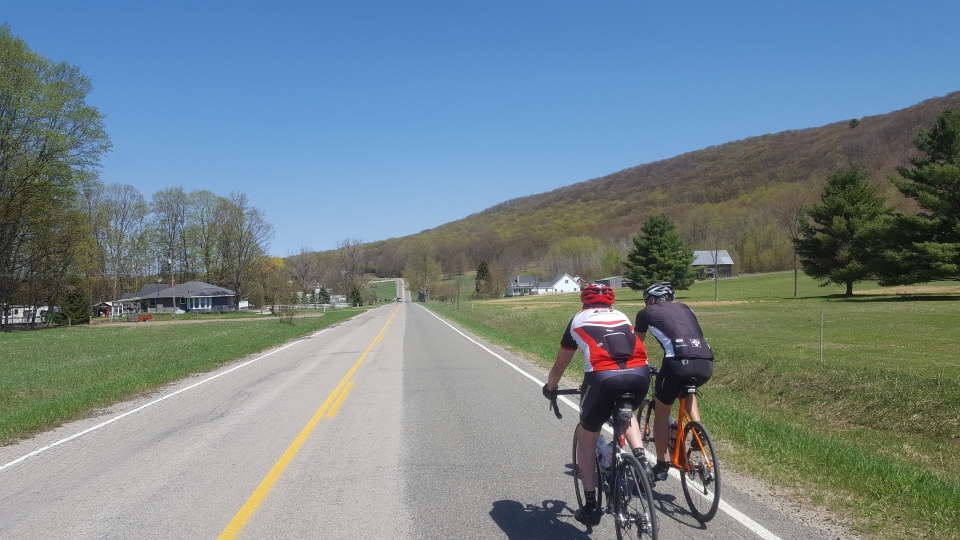 Last year, my friends Mike and Chuck went on a three-day trip up north to Boyne City where a few hard sportives are held every year, the series is called “Mountain Mayhem” and it lives up to the name, at least for flatlanders from southeastern Michigan. I was bummed I couldn’t go last year, but this year the stars aligned and I made the trip with them. Camping, good food, great friends and all of the cycling I could handle – with great weather as well. And more climbing than I could shake a stick at.

Mike has always struggled with hills. He sucks at climbing them. The dude is exceptionally strong on the flat ground, but you put anything more than 5% in front of him and he drops off the back like a lead weight. I’ve tried to work with him in the past, because I can see why he struggles plain as day, but he’s tough to bring around.  He’s one of my best friends on this rock, but that boy is stubborn.

This year, though, I got through to him after the second day of the sabbatical.

I rode behind him leading up to many of the hills on day two and I watched how, and more important, when he shifted. I was typically three gears lower (easier) than he was, and about 30-45 seconds faster at shifting to easier gears.  I would spin right by him as he started grinding his way up a climb.

I anticipate hills and assume I’ll need an easier gear than I likely will. I don’t have a Garmin so I have to go by look and it’s better to be in too easy a gear and shift up than be in too high a gear (especially up front on the chainrings). Say I’m looking at a 10%’er as I round a corner. I might very well be able to climb it in my middle ring and the biggest cog in the back (42/25). On the other hand, with eight cogs behind that on the cassette, why not be prepared and shift immediately to the small ring up front (30t)? Mike stayed in his middle ring and ground up the hill. I’d shift to the baby ring long before and spin right by him with a smile on my face.

There’s no big d*ck prize for grinding up a hill in the biggest gear.

Contrary to popular belief, there are no points for grinding the biggest gear up a hill if you’re the last one to the top every time the road goes up.

Shift early into the baby ring.

Anticipate a low gear because you’ve got a full cassette of harder gears that you can up-shift to if the climb is easier than you thought… downshifting to the baby ring in the middle of a steep climb could end in a dropped chain – in fact, that happened to Mike.  Twice. That’s often followed by a descent to a place where one can turn around and climb the hill in the right gear rather than trying to start out from a stop on a 10% grade.

Now, Mike and I were both riding triple cranks – in fact, we were both riding Trek 5200’s with 9sp triples, so anticipating a hill is a bit of an urgent a matter.  Trying to climb a hill in the middle ring can be an absolute bear if you guess wrong.

Sitting down to dinner on day two, Mike and I had a talk (and Chuck backed me up and filled in some blanks I missed).  I led with the “no big d*ck prize for climbing in the biggest gear” comment and I got through to him.  The next day, Mike followed me up many of the hills and shifted when I did, especially into the small ring.  Lo and behold, he was right on my wheel up most of the toughest climbs, including a couple of brutal “granny gear” hills.

After the ride, I mentioned to Mike how much better he’d done.  Chuck chimed in, right on time, “Well look at that, you can teach an old dog new tricks.”

I don’t know how long that small victory will last, but there are more than enough hills out there to find out, and you can bet we’ll ride them.