I am a proper peacock on a road bike. I offer the distinction of the bicycle type because on a gravel bike I’d be fine, but on a mountain bike, my normal dress would be wildly outside of norms… or overdoing it.

Now, the coming sentence is going to be a little controversial. Please give me a moment to make my case before you storm off in a huff.

The Rules as written by Velominati helped me immensely to get a firm sense of how to look good on a bicycle. First, I really enjoyed the blatantly over-the-top arrogant humor and I was able to keep that in context to use “The Rules” as a guide rather than a straight jacket. I can only offer this, don’t get lost in the over-the-top snarky nature of the rules. Just use them.

So, there are a few simple suggestions people can employ to bring out that inner peacock that will, hopefully keep one spectacular without devolving into looking like you’re in a clown suit.

Examples of manufacturer team kit above… and local team jerseys below – local team kit is absolutely fabulous – you can never go wrong flying your local colors. Assenmacher’s is our local shop, the Affable Hammers are our local team.

To wrap this post up, being a peacock, properly, is never a bad thing. Going to far, into the clownish, is. Know the difference and ride with confidence. And don’t sweat the rules. Too much. Try to see the humor in them and use them for good.

The Rule on Wearing Team Jerseys… The Side Rule That Shall Not Be Broken, Lest You Incur Good-natured Verbal Abuse and Laughter for the Infraction

February 1, 2020 7:00 am / 5 Comments on The Rule on Wearing Team Jerseys… The Side Rule That Shall Not Be Broken, Lest You Incur Good-natured Verbal Abuse and Laughter for the Infraction

Ladies and gentlemen, I realized I made a severe, egregious even, mistake in omitting one small item in my post the other day in which I reviewed my new Ducati Corse team jersey: 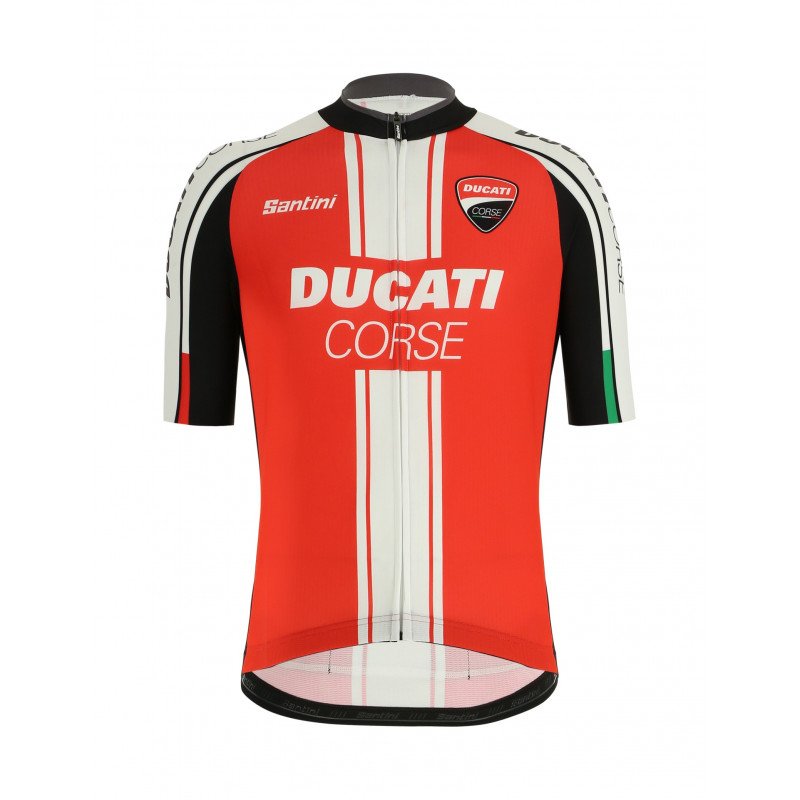 In that post, I wrote that it is becoming increasingly acceptable to wear your favorite team’s jersey as a show of support. Wearing team kit is not directly against Rule #17 which only states team kit is questionable if one isn’t paid to wear it. I think wearing team kit has become far less questionable… as long as it isn’t a zebra or leopard print. In that case, f***, dude.

There is, however, one rule which must not be broken pertaining to team kit:

Rule #16 must not be broken. Respect the jersey. Do NOT wear world or national championship kit. There is a reason for adhering to this rule. It is very simple and easily illustrated with an experience from my cycling past.

I was riding in the Tour des Lac, starting and ending in Fenton, Michigan. 100 miles of fun, and they stuck almost all of the hills at the end. We had a five-man crew comprised of myself, three of my friends, and the German National Champion. His kit said so, right down to his National Champion socks. He was an animal, often pulling for three or four miles at a time, north of 23-mph. By the time we hit 60 miles, I was hurting but I wasn’t about to give up the draft, so I rolled on. A few miles later I was into my second wind and feeling better.

We pulled into a rest stop at the 70 mile mark. I stopped, then my buddy, Phill stopped right next to me… and here comes the German National Champion who was absolutely smoked after just 70 miles with just over 21-mph for an average. He had cycling brain big time and failed to hit his brakes, thereby sliding right into Phill’s rear wheel. Phill didn’t go down though the German Champ did. He also taco’ed Phill’s wheel in the process.

We still laugh about Phill being taken out by the guy… the story gets better every time it’s told and we laugh just a little harder.

You don’t want to be that person. Respect the championship jersey. You’re not good enough or fast enough to wear it. Unless you won it.

Trust me on this one point.

Actually, I don’t even know why they sell them… I can’t believe anyone would be crazy enough to even buy one knowing one mistake in that kit and you’re laughed at.  Forever.

I Shall Flout the Rules on Cycling Caps and You Can’t Stop Me (nanna-nanna, na-nah)

I love cycling caps. I freaking dig them. I have close to a dozen.

Cycling caps are the perfect bug barrier and bee deterrent system so I don’t get stung in the melon.  They’re also cool, in a nerdy “I don’t care if you know I’m a geek for being a cyclist” kinda way.  Finally, for those of us old enough to remember Jesper Parnevick, Jesper Parnevick.

Also, as a little known aside, a cycling cap is an excellent under-cap for a hard hat if you happen to be in construction.

I don’t like the brim when I’m riding, though.  Brim up is the proper way to go, because brim down I can’t see as easily as I’d like when I’m in the drops.  This works with Specialized helmets, but it doesn’t with my Kask Mojito.  The front scoop of the dome protector is all wrong for a cycling cap… Brim up makes the melon protector ride up too high.  I’ve struggled with what to do for the better part of a couple of months.  I almost went back to my Spec. melon protector just so I could continue wearing my cycling caps.

Then it dawned on me; I knew what to do, but The Rules would most certainly prohibit the display.  So unconscionable was my solution, they didn’t even bother addressing it in the rules as they are – but I don’t care.

The solution is to flip the cap backward so the brim covers my neck – but to avoid the obvious problem of yet another ridiculous tan line, I flip the brim up (this also fixes the issue created by the brim messing with one’s ability to look up whilst riding in the drops – an enormous difficulty, as difficulties go.  In cycling).

An impervious bee layer, the brim doesn’t mess with my line of sight, and I don’t have to turn it up, which looks weird paired with my super-cool awesome Kask Mojito helmet.

I just have to watch out for the Velominati… if one of them sees me on the road I’ll have to be on my horse, lest one of them try to knock me off my bike for being badass enough to pull off the reverse cycling cap, brim up.

Yes, it is good to have my problems.