With rain in the forecast, we bumped up our 8 am ride to 7:30.  It rained all of Saturday afternoon and evening but cleared up sometime early Sunday morning.  We awoke to dry roads and a narrow window through which to get in as many miles as possible in two-ish hours.

Our group consisted of our closest friends, Diane and Adam on their tandem, Mike, Matt and Phill.  Of course, Mrs. Bgddy and I took our tandem.

We started out fairly easy into the wind, my wife and I setting the pace.  We quickly built up to a healthy 19 mph and pulled for four miles.  Then Diane and Adam came up to take over.  They pushed the pace to 20 (they’re more experienced and very strong).  We chatted lightly in between gasps for air and enjoyed the ride out to Byron.

Heading into town we were tucked in nicely behind Diane and Adam. Byron is a very popular City Limits sign to sprint for, it’s a long downhill into the sign so it’s fast and helps equalize things for the tandems.  My wife quietly asked if we were going to go for it. I figured we’d just sit on and let Adam and Diane take it, they were in the middle of a long turn up front.  Then I noticed their cadence pick up more than normal.  I could see both Adam and Diane’s calf muscles straining with the effort.  I tucked my head to project my voice back and said as quietly as possible, “Hold on, here we go”.

My wife and I, pedaling in perfect synchronicity, launched forward.  We’d never made our bike move like that…  We were just even with their back wheel and Diane yelled, “Here they come! Go!” We’d worked the slingshot perfectly and shot by them… we stuck with it.  I up shifted one gear and we laid down the wattage taking our speed from 27 to 34 mph and we kept it pegged all the way to the sign.  We took it smiling, both of our chests heaving with the effort to try to get more air into our lungs.

We took it easy up the hill into downtown to wait for the others and stopped at the corner gas station for a restroom break, chuckling about the little race.

From there we weren’t even half-way. We both fired down a Gu and a half each, clipped in and rolled out. We started easy, heading up a fairly steep hill, and then built up to a raucous pace. Diane and Adam did a lot of the pulling but we took our fair share of turns at the helm as well, a departure from the norm… Until today we’ve been stuck on their wheel like glue. We even elicited a comment from Diane about how strong and smooth we are looking. It’s all coming together.

We were heading north and passed a large pack of Affable Hammers coming the other way, hell bent for leather. I was exceptionally thankful we weren’t a part of that train. Not ready yet. Shortly thereafter we looked at the sky to the west and it was not good. I suggested we beat a path for home, asap and everyone else agreed, though hesitantly. Phill had checked the radar and it said the rain was still over Lansing, 40 miles to the west. I simply said, “The radar is wrong”… the rain was coming sooner rather than later.

The trip home was all tailwind and we flew.

We chose to ride the back way home so we could get a couple of more miles and drop Mike, Adam and Diane at home. Mike decided to come with so he could get an even 40 miles… We were at 37 miles and some change with a 20.1 mph average, a full nine tenths of a mile an hour over our previous best – and almost ten miles further…

A mile later we turned west, for our last mile. It was not looking good. Mike was leading us out and I told him he’d better head home, he had about ten minutes before the rain hit, more than an hour early.

Freakin’ awesome. We put the Co-Motion in the house and I went back outside to snap this photo: 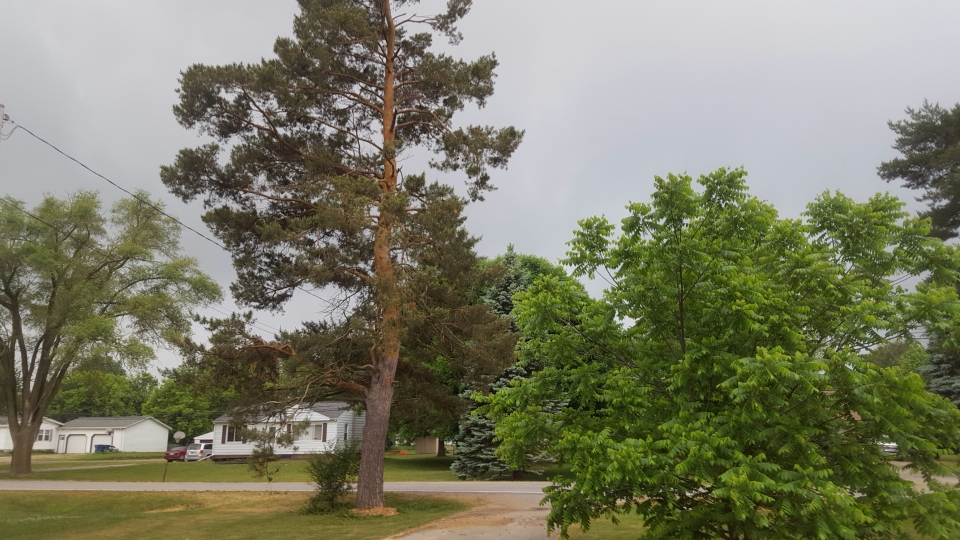 This is four minutes later: 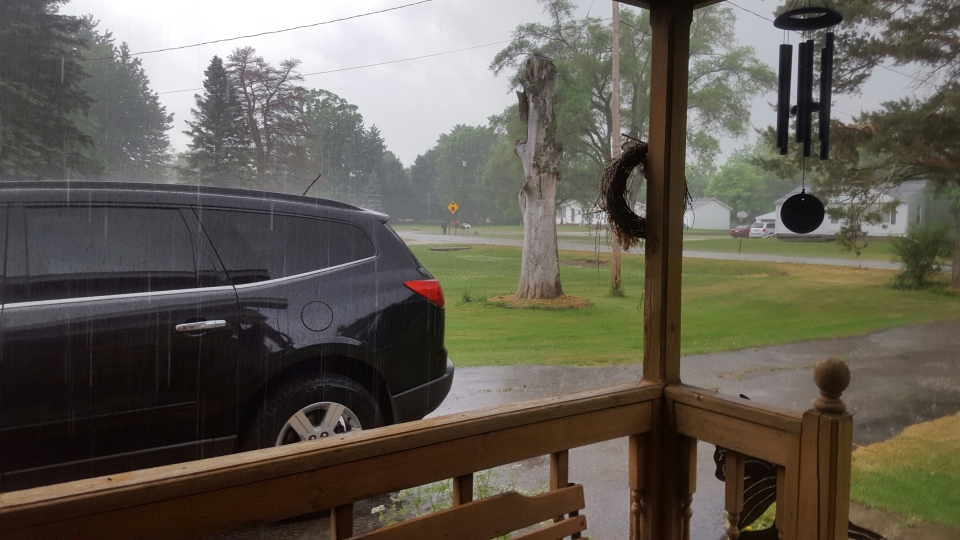 250 miles for the week. A good way to start June… and to be able to hit that 20 mph average so soon, that’s a big deal right there. I love being a tandem couple.

Cycling: The Positive Mental Attitude Needed to Go the Distance

With my wife pushing the outer boundaries of her abilities on a bicycle – and riding faster than some of the guys, we’re getting into some awesome conversations about those abilities.  We had one yesterday on the way down to our nephew’s graduation party and picked it up again on the way home.

My wife had a tough time down in Kentucky on that 53 miler.  She was on the edge for much of the last 48 miles.

I went into the 102 miler the day before, nervous as a cat with a long tail in a room full of knitting grannies in rocking chairs.  I was riding that exceptionally hilly track with a couple on a tandem and my buddy Chuck.  They’re stronger than I am.  Chuck is a freaking mountain goat on two wheels and Diane and Adam are so strong on their tandem, they can almost make hills tough.  Given a stretch of downhill, they can smooth out rollers and make even single bikes work on all but the gnarliest climbs.

Here are a few things I knew going into that ride:

That last item is a ride killer.

After 60 miles I was in fantastic shape.  I was strong and feeling good and we were over most of the hard climbs.  I had to be careful here.  Too much celebrating that I’m feeling good (especially so early) can lead to a collapse when things get tough… and they did get tough.  Just five miles later.

We were into another set of hills that I didn’t remember from the year before and the climbing was starting to take its toll.  We had just ten miles to the next rest stop so I started breaking the ride down into sections.  “Just hold on till the next rest stop.  Get some food in you and go from there.”  I did, it was just a half an hour.  The last 27 miles and change was changed to 25 in my melon.  I don’t have to worry about two miles, so it was going to be about 15 miles to the next rest stop.  50 minutes, give or take.  Rather than take my time at the rest stop, I used the portable facilities, got my food (a banana, two pieces of watermelon and finally a pickle), refilled my H2O bottles and got on my bike – we were off in about five minutes.  Dawdling too long at stops causes the muscles to tighten up and makes starting out again painful.  This is a common mistake among noobs.  Get in, get out and get going.  I glued myself to the tandem’s wheel.

I was developing a gnarly saddle sore, my legs hurt a little bit but other than that, I was able to keep up pretty well.  Then we hit the 80 mile mark.  Just twenty miles to go.  Then the positive mental training I’ve done over the years took over.

I did start struggling again but by the time that section hit, I only had 12 miles to go (plus the extra two that we’re still not worrying about because anyone can do two miles)…  What’s twelve miles?  Nothing.  It’s a warmup.  We’re not even talking about 40 minutes.  “I can do this.” “No chance I’m giving up my draft now, I’m all over this.”

This is the part that my wife struggles with because she doesn’t have the experience I do in tackling the mental aspect of a hard ride when things start getting tough.  Her knee-jerk reaction is to keep going negative which can lead to throwing in the towel.  Fortunately, on her Sunday ride, when she hit that block, she had me and I fed her the positive which helped to drown out, or at least dull all of that negative.

Eventually, with enough wins under my belt, I learned the difference between feeling bad and truly being gutted and done.  I know that I can push through feeling bad and even some being done – as long as I’m fueling properly, I’ll have more in the tank.  On the other hand, if I bonk, I bonk.  If my wife had, she’d know I’d be there to ride with her.  As long as she gives her best effort (and after all of the miles we’ve ridden together, I know – because I’m struggling too) I have no problem sitting up and taking it easy with her.  That’s not what happened though.  She hung on like a champ and did the full 53 miles with the group and learned that she’s stronger than she thought.  She gained a little bit of positive knowledge for the future.  She learned that “done” isn’t always done.  Sometimes it’s just “I feel bad, this hurts”.

Now, I had to learn this all on my own.  My wife gets the minor benefit of my sharing my experience.  Still, she has to change that tape she plays in her head that says, “I can’t”, and that’s really the biggest battle.  In time, with enough wins under her belt, she will get to that point where she knows the difference between her body saying, “F— You, I’m done” and her mind saying, “This hurts and I don’t like you very much”.

That’s the positive mental edge needed to go the distance.

One thing is certain; If I never challenge (d) my negative thinking, if I always gave up when I started feeling a little rough, it would have taken a whole hell of a lot longer to become as strong and fit as I am today. No doubt about it.