Climbing Hills on a Bicycle. For Beginners. Pt 2 – The Nuts and Bolts

You know you’ve found the right group to ride with the first time you come to a 16% grade, the group entirely shatters within 100′, but everyone comes together at the top and rides off into the sunset… (Technically, you never ride into the sunset – cars can’t see you as with normal conditions when you ride into the sun and we don’t want to be dead cyclists.  It’s just a colloquialism)

I’ve spent some time thinking about my last post related to climbing and while it was well received, I wanted to get a little deeper.  I simply ran out of space.  Specifically, I wanted to expand on, or better answer, one key point:

The consequences from even a tiny mistake are huge.

Truer words have never been punched into this keyboard, but what are the mistakes and consequences?  That was covered a little bit in my last post, but there’s more to it than that because mistakes can be recovered from and on that very same hill – if we don’t panic.

Now, what’s the first thing you do when you find you’re in too high a gear or you get boxed in around other cyclists – worse, you’ve been sucking a tandem’s wheel all day and you know it’s rude to pass the tandem on a hill but they’re slower than you.  Now that’s a pickle!

Here are some rather simple mistakes:

In that first post I covered momentum as it pertains to keeping the pedals turning over at a comfortable rate but in each of those scenarios above, you’ll have to think fast and change up your strategy – especially when your breathing starts to pick up and you get close to hyperventilating.  Don’t panic!  Here’s how I handle those situations:

We’ll start with item number one, getting boxed in.  I climb decently so depending where I am in a group when we hit a hill I may have a few slower climbers ahead of me that I have to navigate around.  Know this, it’s a rare day that you’ll stay bunched in a group going up a hill (unless you’re in a race – in which case, you’re reading the wrong post).  If you’re in a comfortable gear for the hill you’re on, stay in that gear and slow down your cadence.  Get out of the saddle and grind for a few seconds while traffic clears ahead of you.  DO NOT try to increase your cadence while you’re out of the saddle, you’ll burn up.  You want to grind easy till traffic clears.  As soon as you see a gap, take two or maybe three good, hard pedal strokes and sit back down…  The momentum you just created should be enough to get your spin started again and you’ll blow by the grinders.  This works meticulously for me, I use it a lot.

The tandem rule, item number two.  It is rude to out-climb the tandem you’ve been mooching a draft off of all day.  If you can grind it out behind them, do so.  If you start overheating, spin up the hill, leave them in the dust, and make your apologies at the top of the hill.

Item number three.  This is for the steep grades – 15% and greater, when it’s tough to simply shift your way out of a mistake.  I always approach steep, punchy hills with care.  Going into a hill that you have to grind up, out of the saddle, is no fun in too easy a gear, it’s almost as bad as too hard a gear (but not quite).  I like to go at these hills with a little momentum from the bottom, then shift to the easier gears right before the incline really goes up.  Just last year on DALMAC, after 90-ish miles, we hit a long, not steep, three mile ascent.  I spun up it easily and came to a sign marking a turn.  I’d left many of my friends in the dust.  Breathing was good, gear selection was good…  When I rounded that corner I was presented with a sign that read something like “Steep Grade Ahead”.  I thought to myself, “C’mon, how bad could it be?”  18%, that’s how bad.  90 miles in, after a three mile climb.  I panicked when I saw the hill.  As soon as I got to the base of the hill, I went all the way down to my granny gear (36/28).  It was too hard to spin in that gear but too easy to grind because I could turn the pedals over too easy.  My cadence kept increasing when I wanted to just plod up the grade – I had to slow my speed to much to grind up the hill in that gear.  I made it about 2/3’s of the way up before I dismounted and walked my bike up the last 100 yards.  18% is not too steep to downshift, but it is to upshift.  It’s not a mechanical problem, it’s a mental problem.  The trick is to start in too hard a gear and quickly downshift until you find the right gear – don’t automatically assume you need the granny gear because grinding out of the saddle in the granny gear is pretty easy.  The trick is to throw the bike forward just a bit to shift.  If your equipment is well-tuned, it’ll work.  Then, do what I didn’t do in that instance:  Become Determined.  I lost my determination because I was tired and wanted the pain to stop.  I could have hip-checked my bike up that hill (I’d climbed much harder hills than that), but I lost focus.

Item number four…  Misjudging a hill’s length.  If you haven’t had this happen, keep riding.  You will.  You turn onto a road and see a steep hill.  Looks to be about 1/4 mile so you start spinning up it.  Your head is down and you’re spinning away as your breathing starts to quicken.  You know your close so you look up to see that the steep part is almost over but the hill actually stretches on for another mile.  Don’t panic.  Rather than upshift when the grade gets easier, stay in that same gear and spin at your normal cadence, maybe a few rpm less, until your breathing slows back down.  Then upshift a gear or two and continue climbing as you normally would.  This works.  All I can say is Brutus Road.  There’s a reason it’s named Brutus.  Sick bastards.

Item number five is the same fix as number four.  Don’t panic.  I broke my chain on a climb last year during Mountain Mayhem:  Beat the Heat.  105 miles of relentless hill climbing and I was at mile 17.  When I shifted going up a hill, from the big ring to the little ring, the front derailleur must have hit my Missing Link just right (and I probably had it backwards) and the whole thing flew apart.  I found half of the link but not the other.  My friends went on and I called the SAG Wagon and waited by the side of the road.  Not content with sitting idly by, or cashing in my day so early, I started looking for the other half in the road.  After a quick prayer and looking skyward, I looked down and there was the other half, right between my two feet (I kid you not).  I called off the SAG wagon, put my chain back together and charged after my friends.  I knew there was a rest stop at mile 22 so if I could just make up a minute or two I was sure to catch them.  I was hoping for a hill but I wasn’t ready for what I got.  I made a left hand turn and there was an 18-20%+ monster staring right back at me.  Now, I had a bit to get to the hill and I certainly had motivation, but I wasn’t without doubt.  That’s a big hill after hammering out three miles to catch my buds.  I knew Mike would be slow going up so I took a minute to spin up to it and recover my breathing.  Once I got to it, I downshifted till I found got one harder gear than I should have been in and I rocked that hill out.  I caught up with my friends at the rest stop and rode the rest of the way with them. 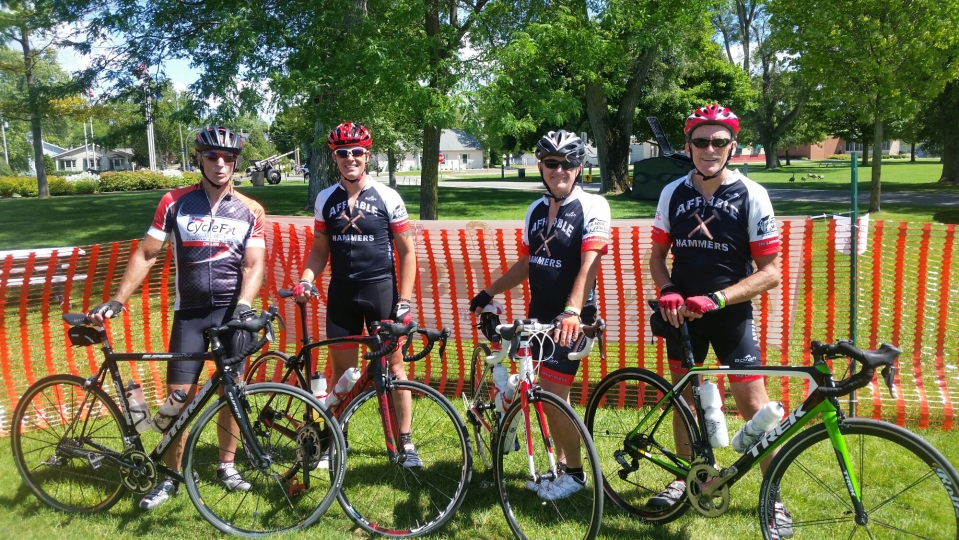 That’s us at the end.

Remember, hills may not be your friend, but it’s kinda tough to get away from them if you ride a bike.  This is a good thing, too.  Practice makes perfect.