Home » Cycling » Peter Sagan on a Pedestal….  It’s Hard not to put Him up there.

Peter Sagan on a Pedestal….  It’s Hard not to put Him up there.

Peter Sagan is my favorite cyclist since Armstrong tore up the Tour de France peloton – only, presumably, Sagan actually is clean.  Keep in mind, when Armstrong was winning we were under the impression he actually was clean.  That said, I don’t want to go back there with this post because a professional most people can like, or at least not hate, is a rare thing.  And Sagan is one that most can like.  For me, it also doesn’t hurt that he rides a Specialized Venge.

I recently read a post written by a friend about Sagan and a back and forth tweet between a young British cyclist and Peter, and their shared love of Haribo gummy bears. 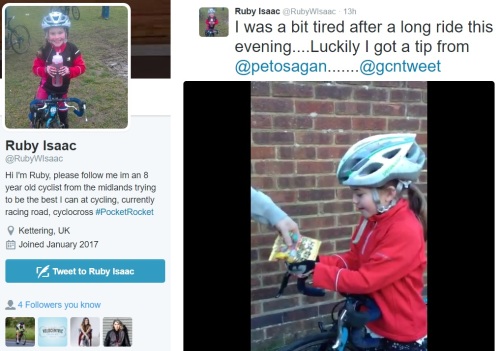 It just doesn’t get much cooler than that.  The World Champ taking a second to reply to the random tweet of a fan.

Sadly, we fans have a funny way of burning these rare greats out, because we all want our “Peter Sagan tweeted me back” moment.  We put people like this on a pedestal then watch as they’re knocked off – some even seem to delight at the process.

As far as I’m concerned, all I can do is sit back and hope this doesn’t happen when it comes to Peter Sagan.  He’s turned out to be cycling’s caped crusader – the nice guy who does really well riding a bike for a living.  He gets to do what many of us only dream of and he’s one of the rare few who genuinely looks like he’s having as much fun as I do when I’m on my bike – and that’s something special right there.

Like Loading...
By bgddyjim in Cycling, Fitness, Humor, Mountain Biking on March 10, 2017.
← Not Much of an Escape from the Cyclist’s Hamster Wheel… Some Winter Training Mistakes I’ve Made that have led to Excess Poundage →